'A promising object of tourist attraction': Trinity Church in Pestrechinsky district recognised as a monument

In Tatarstan, the Trinity Church built in 1904 in the village of Verkhniye Devlizeri of the Pestrechinsky district will appear in the list of cultural heritage sites of regional significance. This beautiful and well-preserved Orthodox church has been empty for a long time and is being destroyed. “The structural scheme of the building reached us without late interventions, however, there is a large percentage of the loss of roofing structures and completions," the act of the state examination says. Now this example of cult architecture of the late 19th-early 20th century will be preserved. Read the details in the material of Realnoe Vremya.

Frescoes have been preserved on the walls

The Trinity Church in the village of Verkhniye Devlizeri passed the state historical and cultural examination and was recommended by the expert for inclusion in the register of monuments of regional significance as an example of cult architecture of the late 19th—early 20th centuries in the style of brick eclecticism. The corresponding act will be issued by the Tatarstan Committee for the Protection of Cultural Heritage Objects. This gives hope that the crumbling temple built in 1904 will be restored.

In 2002, the Trinity Church was included in the list of newly identified objects of the republic representing historical, scientific, artistic or other cultural value. However, since then, the works on the repair and restoration of the temple has not been carried out, it has been empty for a long time and continues to deteriorate. Despite the well-preserved structure of the building, experts note that due to the lack of waterproofing, the surface of the brickwork of the basement and walls of red brick gets wet and collapses, there are foci of bio-contamination, the peeling of the paint layer over a large area, the truss constructions and roof covering are completely lost.

“The exterior brick walls of the building are in unsatisfactory condition, however, sections of the walls that are in disrepair have been identified. It is required to restore the bearing capacity of the masonry (mending, crack injection, filling the joints of the masonry with mortar)," the examination report says.

Everything is sad inside the temple as well: the plaster is damaged, the white stone floors are in disrepair, cracks in the vaults, loss of paintings on the ceiling, broken windows. But some wall frescoes, architectural decoration of facades, historical metal entrance doors, grilles, canopy structure, partially stretched profiles have been preserved.

The project of a single-altar church in the village of Verkhniye Devlizeri was reviewed and approved by the construction department of the Kazan Governorate Government on May 27, 1894. The church was built in 1904, and a year later it was consecrated in honour of the Holy Trinity. The funds were allocated by entrepreneur and landowner from Alatyr (now Chuvashia) Vasily Lvovich Simbirin. The church was parish, with a full staff of clergy. Residents of three more villages came here — Yekaterinovka (Polyany), Sredniye Devlizery, and Aleksandrovka (Kamenovka).

The temple is built by the type of octagon under the arch on a high quadrangle with two tiers of windows. It is a single-domed structure with a semicircular apse, a small refectory with two window openings and a narthex, above which a four-storey bell tower with two bell platforms is built. The facade of the building is decorated with pilasters, deep niches and arched openings, semi-frontons, keel-shaped kokoshniks and other decor.

The temple remained active until the 1930sю After its closure, according to some reports, in 1937 the domes with cupolas and the cross were dismantled, the object was transferred to state needs.

Since its construction, the church has not been repaired and is currently not in use.

The village of Verkhniye Devlizeri is also known as the place where a particularly venerated icon of the Pechersk Mother of God was kept. The legend of finding the shrine was passed down from generation to generation. The icon at the village spring on the feast of the Holy Trinity was seen by a local resident, who reported to the owner of the village, a certain Mokeev. He took it to his house and gave its copy to the Zyuzinsky church. But soon the icon disappeared from Mokeev's house and reappeared again in the same place near the spring. Mokeev brought it back to his house, but it soon burned down. The icon was not found in the ashes and was considered lost.

But the copy became the subject of special reverence of the townspeople and residents of the surrounding villages, as it brought healing to the sick. On the eve of Trinity and on the feast itself, a large number of worshippers from neighbouring parishes flocked to the church. After the liturgy, the icon was immediately taken to the very spring where it appeared. There was a water consecration and a prayer service to the Mother of God, and then for three days the icon was carried to the homes of the villagers.

Currently, the Pechersk Icon is located in the Pokrovsky Cathedral of Kazan, which is the cathedral of the Kazan-Vyatka Diocese of the Russian Orthodox Old Believer Church. It can be found from the left wing of the choir.

There are 8 more churches in the list of identified monuments

The examination materials say that the Trinity Church may be of interest not only to local historians and lovers of antiquity, but also to schoolchildren and students as an object of excursions on the topic of Orthodox faith and construction in the Russian Empire. It also has a tourist potential: it “may be of public interest, being a promising object of tourist attraction as part of excursions to the districts of the Republic of Tatarstan to study and popularise the cultural heritage of the region”. Even a separate route can be build — there are many interesting old religious sites in the Pestrechinsky district.

All of them are made of brick, five of them were in disrepair, services were held in the Assumption Church and the Church of the Procession of the Venerable Wood of the Life-Creating Cross of the Lord (as of January 1, 2002). 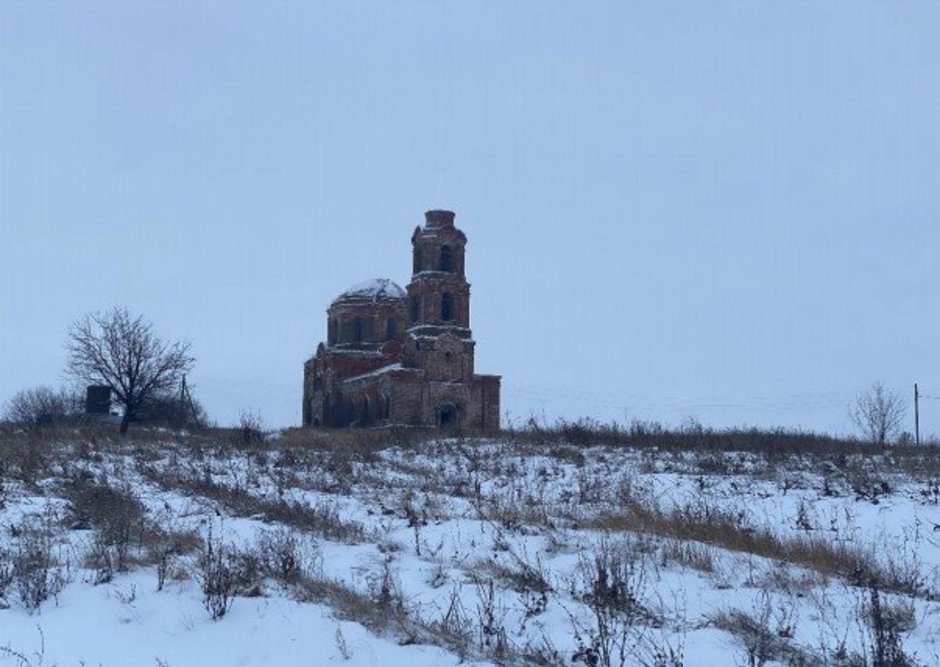