Siemens to build a plant for 352m euros for Nizhnekamskneftekhim

A corresponding agreement has been signed in Munich, in the headquarters of the German concern

The German company will build an autonomous power station for the city-forming enterprise of Nizhnekamsk. The power unit of 495 MW will provide all enterprises of the petrochemical giant with electrical power, including those the construction of which is only being in the planning stage. At the new plant there will be installed the equipment that will ensure minimal emissions into the atmosphere, which will have a positive impact on the environment of Nizhnekamsk. Why it was important for Siemens to start the project with TAIF Group and why Rustam Minnikhanov couldn't miss the signing ceremony in Munich — read in the material of Realnoe Vremya.

''It is the basis of the industry of the whole region''

The arrival of the delegation from Tatarstan was scheduled for 3 p.m., but the head office of Siemens had already been ready an hour before the start of the meeting. The hall, where the signing was to take place, brought together representatives of the German concern and journalists. When the headquarters was approached by a motorcade, President and CEO of Siemens AG Joe Kaeser, President of Siemens Russia Dietrich Moeller, Deputy Minister-President of Bavaria and Bavarian Minister for Economic Affairs, Media, Energy and Technology Ilse Aigner went out to meet President of Tatarstan Rustam Minnikhanov and Director General of TAIF PSC Albert Shigabutdinov. The guests were taken to the headquarters of the company. It is the main office of Siemens AG in Germany, previously the headquarters worked in Berlin, but after the Second World War moved to Munich.

''Unfortunately, the minister-president of Bavaria could not come, he is ill,'' Ilse Aigner explained the absence of Horst Seehofer and added that that day she would work for both.

''I wish him get well soon,'' Rustam Minnikhanov wished him health.

The delegation from Tatarstan visited the head office of Siemens three months ago, Joe Kaeser, president and CEO of Siemens AG, reminded. The result of the joint work — the signing of agreements on construction of an autonomous power plant with Siemens turbines with a capacity of 495 MW by the New Year between Nizhnekamskneftekhim and Siemens.

''The capacity of the plant will amount to nearly 500 MW, it will be the basis of the industry of the whole region and will operate on clean syngas. It is really a very important innovation, and innovations become real thank to people. When they find partners, they agree on the best solution. Thank all of you that you have made the decision in our favour,'' President of Siemens AG Joe Kaeser said.

As if in gratitude for that TAIF will implement the project jointly with them, Joe Kaeser gives Tatarstan the certificate for 500,000 euros. ''We would like to allocate 500,000 euros to social projects to be implemented in your region,'' the president of Siemens AG said, presenting to Rustam Minnikhanov a huge certificate. 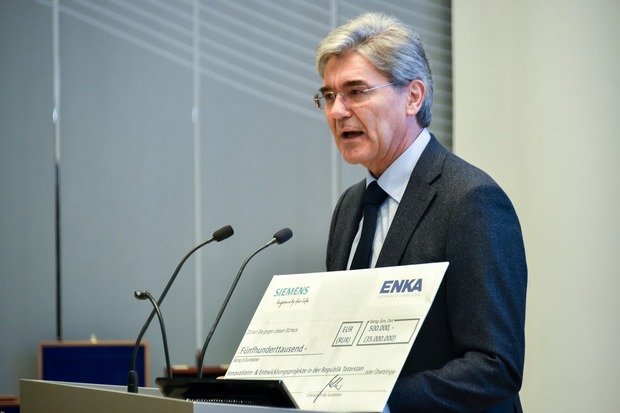 Joe Kaeser presented the Republic of Tatarstan the certificate for 500,000 euros for realization of social projects. Photo: prav.tatarstan.ru

The second major project for the year with the German company

This year it has been the fourth trip to Bavaria of the president of Tatarstan. The cooperation between the regions continues to strengthen — this year the trade turnover between Tatarstan and Bavaria has increased by 85%. Overall, Germany has long been the largest trading and economic partner of the republic. Last year the trade turnover between Germany and Tatarstan exceeded 1 billion euros, and the figures continue to grow: for the first half of 2017, the figure increased 1,9 times. This year Tatarstan and the richest federal state of Germany — Bavaria — have worked out two major projects. In May, at the St. Petersburg International Economic Forum, TAIF Group and Linde signed a memorandum on strategic cooperation. It involves a number of contracts on gas separation, technical gases, but the main one – for four stages of the ethylene complex. At the end of the year, Nizhnekamskneftekhim and the German concern Siemens signed an agreement on implementation of the major project.

''When Albert Shigabutdinov told that they had reached the agreement, we with pleasure came to the ceremony to show that the project would be supported by the leadership of Tatarstan,'' said President of the Republic of Tatarstan Rustam Minnikhanov.

''We are long-standing partners, but today it opens a new chapter of success and, perhaps, a new chapter in the Tatar-Bavarian relations. Our regions are similar in size, but most importantly, we have a lot of small and medium enterprises and low unemployment. It is the leading regions. Today's signing symbolizes the cooperation of three animals — the Bavarian lion, the snow leopard and the brown bear. TAIF, Linde and Siemens – it is a good bridge for cooperation, and when such contacts are concluded – it is a good impetus for the development of the country,'' said Deputy Prime Minister of Bavaria, Ilse Aigner.

After the welcome speech, the director general of Nizhnekamskneftekhim PJSC and President of Siemens Russia Dietrich Moeller signed a cooperation agreement. The agreement was signed by the director general of Nizhnekamskneftekhim PJSC and President of Siemens Russia Dietrich Moeller. Photo: Ksenia Zharkova

''It was crucial for Siemens to join this project''

After signing the agreement, the project implementation will take 40 months. Siemens will work on the basis of EPC contract: the company is responsible for the design, the supply of equipment and construction. The German company on a turnkey basis will commission a unit consisting of three turbines — two gas and one steam, which will be on the site of the old station.

''The project is difficult one as it is not just gas, it is the so-called syngas, which is a by-product of processing. We had to modify the burners on turbines in order to make them work on gas. It was crucial for us to join this project because Siemens is a world leader in the production of gas turbines. Especially as it is the cooperation with Tatarstan, with which the work is developing very fruitfully,'' said Oleg Titov, the director of the energy and gas division at Siemens. Siemens will work on the basis of EPC contract. Photo: Ksenia Zharkova

If before syngas was burnt or thrown away, at the new plant it will be used for the production of electricity. This will reduce the cost of production and ensure the continuity of the cycle — power outages, supply problems are excluded.

''For Nizhnekamskneftekhim it is an important project that aims to provide both current productions and those planned for the future. It is also aimed at the olefin complex with all derivatives, and it is about 10-12 different productions in the next 5 years. Accordingly, the capacity of the new steam plant is designed with due regard to the company's development,'' said Director General of Nizhnekamskneftehim PJSC Azat Bikmurzin.

Siemens will take in contractors the Turkish company ENKA, which, in turn, will work with subcontracted installation companies. For the project realization TAIF has given preference to the equipment that will ensure minimal emissions into the atmosphere.

The products of oil-associated gases processing that were previously burnt now will be directed to steam-generating plant, which will reduce the impact on the environment.

''The projects that have been signed this year are crucial. The construction of the olefin complex is a global project for the whole country. The project that has been signed today — it is improvement of the environment, the competitiveness of electrical energy and releasing of natural gas for hydrogen production. There are many positive points, the most important thing that any project should be economically viable, economically promising,'' Rustam Minnikhanov said. This year Tatarstan and Bavaria have worked out two major projects. In May, TAIF Group and Linde signed a memorandum on strategic cooperation. In December, Nizhnekamskneftekhim and Siemens have signed an agreement to build a power plant. Photo: Ksenia Zharkova

''I am glad that the cooperation between our regions continues. These investment projects are the result of the joint work. Mr. President and our Minister-President have met this year quite frequently. Thanks to these projects, there appear new jobs, we are talking about thousands of jobs and, in my opinion, that's a significant figure,'' Deputy Minister-President of Bavaria, Bavarian Minister for Economic Affairs, Media, Energy and Technology Ilse Aigner said.

The German company will oversee the project, it is planned to attract local specialists for the construction of the facility. The project cost is estimated at 352 million euros, the power plant's commissioning is scheduled for 2021.