Mikhail Slobodin, Beeline: ‘The implied by Yarovaya Law amount of information is more than of Google or Facebook’

The package of amendments to the anti-terrorism legislation in the part of data storage of users' communications was adopted in 'a very quick mode' and its implementation in its fullness is virtually impossible, believes Director General of PJSC VimpelCom (the brand of Beeline) Michail Slobodin. Recently, the top manager has met with the students of the Innopolis University. He lectured about digital trends in the world, about his vision for the future of telecom in Russia, and also he gave an exclusive interview to Realnoe Vremya.

You are among the other leaders of the 'Big three' of the Russian mobile operators who have signed the petition to the head of the Federation Council Valentina Matvienko with a request to reject the so-called anti-terrorist amendments, initiated by a deputy Irina Yarovaya and senator Viktor Ozerov. The most heated discussion for the last many years in the telecom market followed about this package of amendments. Is it true the Yarovaya Law in the form in which it is adopted will have a fundamental impact on the telecommunications industry? How will it affect? Will the tariffs change? What investments may be required from the operators? For what is VimpelCom preparing in this connection?

The government was adopting the provisions of this package in a very quick mode. And now the question is, rather, not about how much the prices will rise but how much will it really cost, how long will it really take and on what basis to do it. The problem is that the implementation of the amendments will require the changes in the entire infrastructure, which needs to expand capacity for saving data dramatically.

For example, we have the custom info, we, roughly speaking, 'passed' it and 'forgot' it without saving. We have small capacity for storing information, it is enough only for meeting the current legislative requirements of the state. But if we have to store the total volume of transmitted data, it will require a huge capacity expansion, and it is very big money. Of course, at the stage of preparation we have done a preliminary assessment and now a more detailed assessment is taking place. About 'Yarovaya Law': 'If we have to store the total volume of transmitted data it will require a huge capacity expansion, and it is very big money'

Another problem — we will 'feed' the foreign manufacturers. In Russia, such level of capacity simply does not exist. Even the equipment producers may have problems: the implied amount of information of the Yarovaya Law is just enormous, it's more than of Google or Facebook. Even the production of niobium — used in the manufacture of storage metal — is limited in the world. It is simply not enough. There's a lot of technological issues that now need to be clearly and competently analyzed.

Frankly speaking, our colleagues, who will use this information, need to create a very powerful software in a very short time that will pull from all this data that is stored the data that they need. This task is of the world scale in complexity. Hundreds of billions of rubles of investment, of course, if it comes, will push the tariffs. It's not going to happen today or this year, but nevertheless, if the industry is obliged to invest huge amounts of money in infrastructure, anyway it will come to this. I would not make predictions of how expensive the mobile service will be — it is too early. We should assess everything — the problems, limitations, and only then to make conclusions. I think that by the end of this year we will have made the majority of conclusions.

How do the operators work with big data? Do they collect and analyze the data about a subscriber behavior in any form? Is it possible to make a business from it and how profitable it can be, in your opinion?

There is no sense just to collect data. The question is how to create technologies that detect certain generating financial flows. In fact, when you make a relevant offer to a customer, especially in a time when a customer needs it, the percentage of accepted offers by the customers increases dozens, sometimes even hundreds of times.

The development of such things with big data really creates enormous cost for the future. For us, for Russian business, in order to counter Google and Facebook, which have everything long-established and put on stream in this area, we need a very serious effort. Google and Apple have long and systematically been 'scouring' everyone from all contacts with a client. Their task — less players had access to a client and to make money themselves. Therefore, big data should be an application for commercial projects.

For example, the retail chain Walmart, which by analyzing the purchase data, revealed the pattern that after the announcement of a tornado in those states where it was made for some reason the consumption of cupcakes with raspberry filling increases. Why this happens is unknown but somehow it happens. And what they did: after an announcement of a tornado they started to put these cupcakes in a prominent place. The consumption of these cupcakes as a result increased many times. People raised millions of dollars. And such stories are a huge amount. But there are no enough such experts on these issues in our country. About the use of big data: 'There is no sense just to collect data. The question is how to create technologies that detect certain generating financial flows.'

Are you planning to create a point of presence in Innopolis — for example, the customer support center?

It is impractical to create a customer support center here. In what we have a need and what is the ground for work here — it is big data. In the country there is a huge deficit of people who is able to analyze it. The data will be ours, we will store them in one of the largest in Europe data centres in Yaroslavl. Now we are considering to organize a big data center in Novosibirsk. But there is a shortage of personnel, so I think in this area something can work out here. In Innopolis we need computing power and people who are interested in doing it and it already has it. 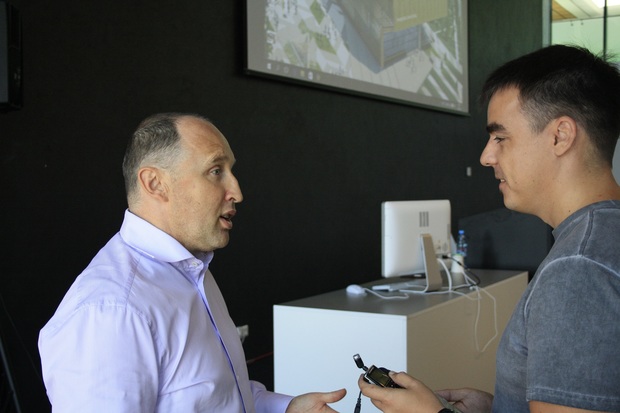 About oil prices: 'Two years ago, 45 dollars per barrel would be a disaster, but now we have accustomed. The similar situation is with the dollar'

You are the author of the popular posts about the situation on the oil market, you even made the true forecast for oil prices in 2015. Your forecast for 2016, as you wanted, is more pessimistic that the reality, however, not much. Now for an ordinary citizen, oil prices are no longer the topic number one, as well as currency exchange rates, maidan and other trends. But, actually, the tension on the world oil market persists. Do you follow what it happening and what changes caused by the oil situation do you see in the Russian economic policy?

I return to the question of oil prices only once a year during the January holidays when I have holidays. Now I don't think about it. In fact, the situation is clearly still fragile. We just got used to it although the situation remains very difficult. Two years ago, 45 dollars per barrel would be a disaster but now we have accustomed. The similar situation is with the dollar. Two years ago, 70 rubles per dollar would be a disaster but now we got used to it, and the government reflecting upon whether we need such strengthening of the ruble.