Participation in sports events in the city and the factory is a lasting tradition of Kazanorgsintez PJSC workers. A voluntary sports community was created in the enterprise in 1966, and 13 sports competitions started to be held. The tradition has become only stronger since then. Over 3,000 employees participate in the competitions every year. The organisation structure of health and fitness movement at Kazanorgsintez allows the factory's workers to lead an active lifestyle and win victories in sport. Realnoe Vremya tells the details.

From sports shop to big wins

Initially, it was planned to participate in sports events in the factory only. A bigger number of workers joined the sports life in the factory as time went by. And Kazanorgsintez teams began to reach regional, urban, republican and all-Russian competition levels.

The enterprise has comfortable conditions to do sport. Rec rooms in some shops have power equipment, treadmills, tennis tables. Caring about the workers' physical health, the enterprise annually holds summer and winter competitions of subdivisions in 13 disciplines. Photo courtesy of Kazanorgsintez PJSC

Employees of the enterprise compete with each other for the title of the best sports subdivision. Events are held in three age categories: for workers under 35 years, from 35 to 50 years, and above 50 years. The Bisphenol A factory team expects to be first this year according to preliminary results.

''Sport positively influences health, thinking, general health of Kazanorgsintez workers. The enterprise's staff becomes united, strong. If you do sport with your colleague, you aspire to have a common victory, you also want to support him at work, you're afraid of letting him down,'' Aydar Mindubayev, supervisor in sports activity in the trade union of Kazanorgsintez PJSC workers.

Participation in competition of the Russian Chemists' Trade Union

The best Kazanorgsintez athletes compete for the enterprise in the competition of the Tatarstan regional trade union of chemists. This year it was on 7-8 September on the territory of Sunny recreation base of Kazanorgsintez PJSC. 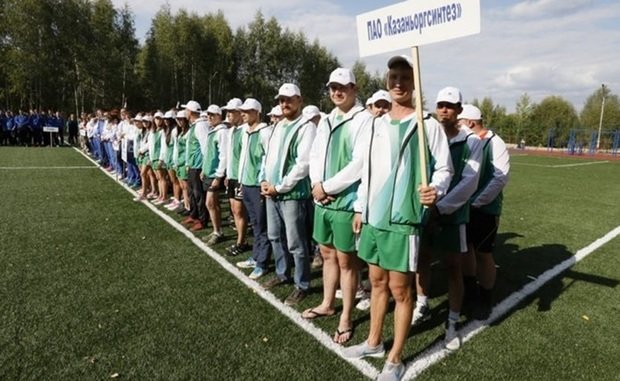 The best Kazanorgsintez athletes compete for the enterprise in the competition of the Tatarstan regional trade union of chemists. Photo courtesy of Kazanorgsintez PJSC

Team sports are especially popular in the enterprise: futsal, volleyball. Sintez team is in the first futsal league in Kazan. The athletes' game already had victories. In summer 2017, the Kazanorgsintez team won the Men's Futsal Kazan Cup in June. Last December, Sintez also was first in a futsal tournament among veterans of chemical enterprises dedicated to the 40 th anniversary of the Tatarstan organisation of the Russian Chemists' Trade Union. Last summer, the team became the futsal champion of Russia among chemical enterprises. In Moscow in May, the football players won this title again and became two-time champions of Russia among chemists. ''The Kazanorgsintez players train twice a week in a rented hall of Olympiyets complex in Zalesny. We rent a hall for the men's volleyball team in the Chemists' Palace. Veterans of the enterprise also train here. The women's team train in the Lushnikov Petrochemical College. A professional coach will work with them this year,'' Aydar Mindubayev told.

The shop-floor trade union of Kazanorgsintez PJSC pays the rent for the sports halls. The enterprise also pays travel expenses to compete in other cities of Russia and abroad and purchase uniform and shoes for leading teams.

A free ski rental opens for the Kazanorgsintez trade union members in the shop-floor trade union in winter. Factory workers don't miss a single ski race. This year about 400 workers have participated in one of the main winter sports events – Russian Ski Run-2018. Kazanorgsintez PJSC Board Chairman Ruslan Shigabutdinov, chief engineer Rafael Safarov, other members of the executive directorate and all factory directors supported the enterprise's staff. Inna Lobanova, operator of the Organic Products and Industrial Gases Plant, and Galina Suslova, laboratory worker of the quality management of Kazanorgsintez PJSC, achieved more success in skiing. They participate in all competitions, neither miss they marathons and roller skiing championships. The athletes win the first and second places in turn in skiing competitions in the factory.

''I liked skiing at the age of 12 when I used to go to the Kazanorgsintez sports school. After I came to the factory, I started to participate in urban competitions, later in regional, Russian and world contests. This year I've gone to Khanty-Mansiysk to the Yugra Ski Marathon. 700-800 skiers competed there, I managed to finish eighth,'' Inna Lobanova told.

To be fit and prepare for championships, the skiers do sport every day except night shifts. In winter they go to train to Zelenodolsk or Chebaksa, as Kazan doesn't have a good ski track.

''You stay healthy doing sport. Your brain and body don't get old. Sport gives me energy, as I work as an operator, physical power is very important,'' Inna Lobanova explained.

Both amateurs and professionals are in water

The fact that one of the oldest swimming pools in Tatarstan – Orgsintez – is a property of the enterprise proves that the enterprise has respected sports almost since its opening. In 1973, when the swimming pool opened, it was the first universal water sports facility that had a big 50-metre pool and diving platforms. The creation of the swimming pool allowed Sintez water polo team to achieve serious sports accomplishments. The fact that one of the oldest swimming pools in Tatarstan – Orgsintez – is a property of the enterprise proves that the enterprise has respected sports almost since its opening. Photo courtesy of Kazanorgsintez PJSC

This year, development of water polo in Tatarstan, to which the Kazanorgsintez officials pay great attention, has reached another, higher level: a water sports club has been created on the basis of the Kazanorgsintez PJSC water polo team. Now Sintez will be represented not only by water polo but also diving and swimming masters.

Two honourable masters of sport of Russia are among its pupils: two-time Olympian (2000 and 2004), world and European champion, captain of the legendary Sintez WC, president of Sintez WS SC Irek Zinnurov and Olympic swimming champion in 2005 (Melbourne, Australia) among people with hearing loss, repeated champion of Russia, Europe and the world Olga Fyodorova. World-class swimming masters of sport Aleksandr Shinin, Yana Martynova, Ernest Maksumov and champion of Russia among people with hearing loss Olga Savina revealed their potential in the Orgsintez swimming pool.

After a meeting of the new club members with factory workers, active workers decided to create an amateur water polo team. Its training began this autumn. It's planned to compete in an amateur tournament.