Rise in retail lending: if lending boom might be attenuated

A five-year fall in Russian residents' income has been accompanied by growth of loan debts: last year, it rose to 14,4% of GDP and exceeds 15 trillion rubles now. The Central Bank is trying to cope with the overheating with the help of next tightening bank requirements (the market ignored the previous one). At the moment it's unknown if it will be possible to attenuate the retail lending boom. Realnoe Vremya gives the details.

In late January, head of the Central Bank Elvira Nabiullina warned bankers: ''Rapid growth of consumer lending against the backdrop of stagnation of the population's real income can pose a threat to financial stability and be unsafe from a perspective of borrowers themselves.'' It was the first warning: Nabiullina and her deputies had been talking about such threats throughout last year; experts and the professional community joined the discussion.

The Central Bank is trying to cool lending down not only by words but also by deeds. In December, he raised risk premiums to consumer loans by 30 per cent points. The rise affected loans with a total value of 10-30% that will be granted from 1 April 2019. The idea is to reduce the attractiveness of highly risky lending: after raising the coefficients, banks will have to transfer more money to reserves for possible losses. That's to say, conserve this money withdrawing from circulation.

The current rise in increments is the second in six months: the previous was in September 2018 when the increments increased by 130-200% depending on a credit's full value. What's the reason for such concern?

During the crisis years of 2015-2016, Russians preferred to give the money back to banks (which was obvious considering the painful rise in the key rate to 17% in December 2014). Then the market began to recover. 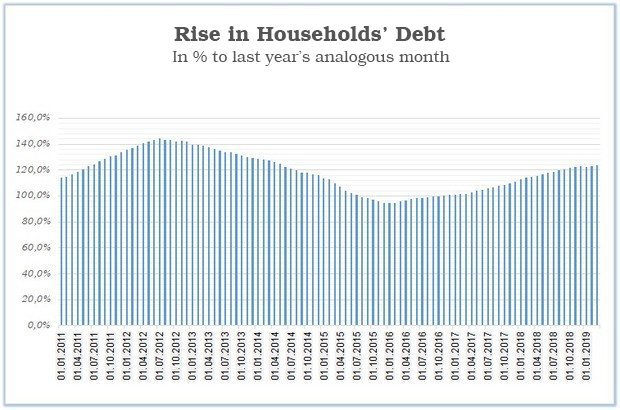 Last year, the total volume of the population's debts rose by 2,7 trillion rubles and totals almost 15,3 trillion today. The debt's growth pace has uninterruptedly accelerated for more than two years, by this March they've reached 23,8% on a year (a high since June 2014). The biggest state-owned banks have approximately the same growth. For instance, last year, Sberbank's portfolio of credits to natural persons increased by 25%, that of Otkritie FC did by 30%, VTB – over 10 times (according to the bank's financial report).

The ration of households' debt to GDP today is about 14,4%, which is the highest level in many years (though this indicator remains much lower than in most developed economies). Another indicator is the ratio of granted credits to the volume of the population's income – it hit a record high in 2018 – 22% (12,5 trillion of credits against 57,5 trillion rubles of income).

This can partly be written off as the blossom of mortgage – mortgages account for 43% of the total debt of natural persons. This could calm down, however, the portfolio of unsecured credits grows as fast as whole retailing (+23,3% year on year in January). If the threat is big

Lending has recently been stimulated by relatively low rates, unmet demand for consumer goods and the population's lack of money. This is indirectly proved by the fact that residents in regions with a not high quality of life augment their debts most: the Republic of Tuva (twofold growth in 2018), Altai Krai (growth 2,2 times), Zabaikalsky Krai (3,1 times), Khakassia (4,6 times).

Is the rapid accumulation of debt with a simultaneous reduction in well-being really a time bomb? Not everything is clear. The rapid growth of the nominal credit portfolio of natural persons isn't a big danger in itself, says analyst at Otkritie Broker Timur Nigmatullin. The case is that the debt is rising amid reducing interest rates. Consequently, if we consider the debt load as part of income borrowers spend to pay off credits, now it is lower than pre-crisis levels (5% against the 5,6% peak in the middle of 2014). 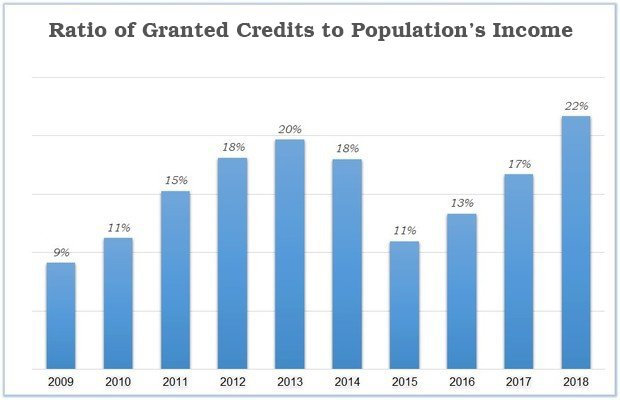 As for threats for the banking system, they just can be found in higher unemployment, a new world financial crisis or especially strict sanctions: ''In this case, it will be hard to pay off even a cheaper debt. I evaluate the risks of the enumerated events during the year as low,'' Nigmatullin goes on.

Chief analyst of Expert RA rating agency Yekaterina Schurikhina thinks that the rapid rise in debt can be fraught with unpleasant consequences. Russians' debt load is increasing with the stagnation of real incomes.

''When the situation in the economy gets worse, the population's possibilities to pay off credits reduce, which brings to growth in defaults. In such a situation, banks will have to complete the formation of reserves for troubled loans. Moreover, the level of retail credits is minimum now: the coefficient of reservation in the portfolio of similar claims and loans of natural persons was 6,9%, while it was 11,1% three years ago,'' she notes.

However, Schurikhina is sure that the overheated market will reply to the new measures of the Central Bank. The rise in risk premiums in combination with a higher rate than in 2018 will restrict retail lending. The introduction of a compulsory calculation of the debt load of a borrower when granting loans over 10,000 rubles from 1 October will also make an impact.

Timur Nigmatullin, in turn, adds that apart from tightening the rules, the Central Bank should press on other, alternative leverage: ''The rise in risk premiums isn't a sufficient tool. It's important to improve borrowers' financial literacy, control the margin in the banking sector, introduce better practices of market regulation (credit holidays when losing a job and so on).