The Rakhlin Seasons international festival held for the ninth time opened in the S. Saydashev State Big Concert Hall on 6 April. It's dedicated to the memory of founder of the Tatarstan symphony orchestra Natan Rakhlin. Realnoe Vremya gives the details.

After the orchestra's founder

One of maestro Sladkovsky's distinctive features is respect for the memory of predecessors. The head conductor and art director of the Tatarstan State Symphony Orchestra (TSSO) isn't one of the those who consider that the field was scorched when he came. For this reason after arriving in Kazan 9 years ago and starting to work with the Tatarstan State Symphony Orchestra, the maestro founded The Rakhlin Seasons festival after the orchestra's founder, people's artist of the USSR Natan Rakhlin among other famous music projects, thus maintaining Rakhlin's traditions.

One of the traditions Rakhlin founded was educational. And now premieres account for a huge percentage of the compositions performed by the TSSO, plus every season citizens of Kazan acquaint with new performers about whose arrival our music lovers could only dream. This time The Rakhlin Seasons, which opened on 6 April, won't become an exception. During the festival that will last till the end of April with breaks, the audience will see a new generation of musicians – cellist Sergey Krylov, cellist and violist Yulian Rakhlin and violist Maksim Rysanov. The gimmick of this year's Rakhlin Seasons is that these performers will also act as conductors. So citizens of Kazan will hear such a parade of conductors and performers at the same time. The TSSO never ceases to amaze us.

''I deeply believe in her,'' Denis Matsuyev once said in an interview about young pianist Aleksandra Dovgan when the girl won a Grand Prix in one of the prestigious music competition at the age of 10. Now Aleksandra is 12 and she actively gives concerts, working with famous orchestras and musicians. So it seems that Denis Matsuyev who actively takes care of young talents wasn't mistaken. By the way, Aleksandr Sladkovsky conducted in the competition that Sasha won – she was the youngest competitor. Now the maestro invited Aleksandra Dovgan to take part in The Rakhlin Seasons.

Sasha is a winner of a number of international contests, including The Nutcracker TV contest and the Vladimir Kraynev competition. She is a scholar of the funds of Vladimir Spivakov, Mstislav Rostropovich and New Names. Sasha called the concert of Felix Mendelssohn in which she was the soloist on that evening one of her favourites. By the way, Mendelssohn also was a whiz-kid, his first public performance was at the age of 9. 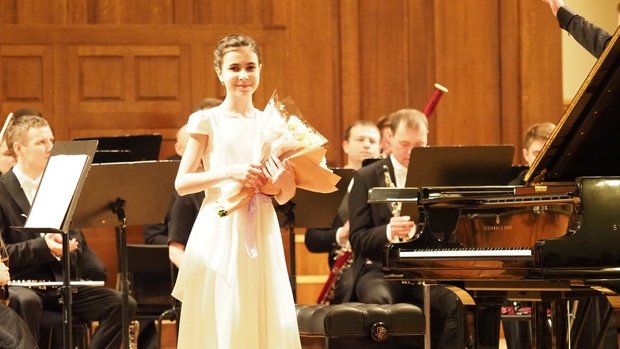 Young pianist Aleksandra Dovgan, a winner of a number of international competitions, was the soloist

The young pianist appeared in a long white dress in the front of the audience, walked onto the stage still as a child, with a lope. She shook the first cello's hand, gave a bow to the orchestra, sat at the piano and very confidently played the first chord. Mendelssohn's concert was sincere and tender, it seemed to be shining with joy, sparkling with the youth's charm. Aleksandra Dovgan was confident next to the orchestra, moreover, maestro Sladkovsky was close who gave the soloist this confidence. When the performance ended, the audience applauded her for long, and Sasha had to encore.

The maestro probably ran a risk having invited such a young talent to take part in a serious concert. But his intuition didn't fail him once again – Sasha Dovgan who, undoubtedly, has a big future became an adornment of the first evening of the festival. And this also was a continuation of Rakhlin's traditions: as it's known, Mr Rakhlin supported the talented youth.

Aleksandr Sladkovsky loves Mahler – it's an axiom already. He does not just love him – he has a fine appreciation of the romantic nature of his music. This is why the appearance of Mahler's Symphony No. 1 on the programme of the concert opening The Rakhlin Seasons this year wasn't a surprise. It seems that Kazan had never heard so much of Gustav Mahler since Sladkovsky chaired the TSSO who shared his love for this composer with citizens of Kazan. 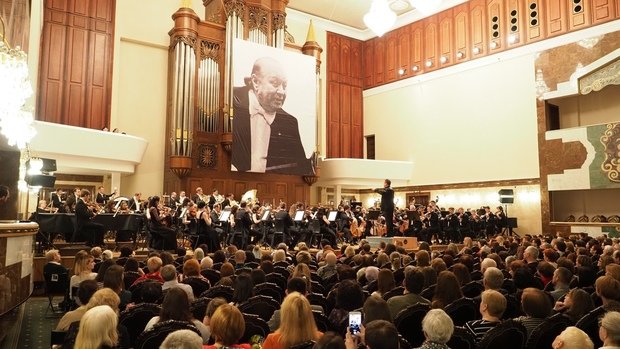 During the festival that will last till the end of April with breaks, the audience will see a new generation of musicians – cellist Sergey Krylov, cellist and violist Yulian Rakhlin and violist Maksim Rysanov

Mahler who created Symphony No. 1 under the influence of unrequited love wrote later that this music entered his soul unstoppably, like a 'mountain torrent'. And the conductor, as usual, felt this unstoppable nature and managed to interpret it.

The lyric hero of the symphony goes through a number of stages of spiritual formation – from unstoppable, almost childish joy of being, to ironic perception of life, disappointment and finally some merger with nature, with God's world finding consolation here.

And again, the romantic character was close to the maestro's anxious nature for whom every performance is a search for senses, it's an opportunity to learn himself and the world through music, it's amazing penetration into a composer's idea, and it's always light at the end of the tunnel in the end, even in the most tragic composition. So was it on the first evening of The Rakhlin Seasons.