''Who send them to die without hesitation?''

Europe – Russia – Asia international festival opened on the stage of the Kachalov Theatre in Kazan. It began with a play of an urban drama theatre from Hannover All Quiet on the Western Front. Realnoe Vremya gives the details.

The novel All Quiet on the Western Front was staged by a Hannover theatre and produced by Lars-Ole Walburg in 2014 – when it was the 100th anniversary of the First World War whose events changed Europe.

Erich Maria Remarque went to war in 1916, was injured, the injuries were numerous, and he spent the rest of the war in German hospitals. The novel All Quiet on the Western Front describing situations he knew first-hand came to light in 1929 and became a sensation almost immediately. Over 1,5 million copies were sold over the year – the ''lost generation'' who survived the war and hardly fitting peaceful life devoured the book. The book was later translated into 36 languages of the world, a year later it was screened and won two Oscar awards. A huge number of copies sold, and the screening made Remarque a rich person, but it seems that the money didn't bring him peace, he suffered from depression almost all his life. Erich Maria Remarque went to war in 1916, was injured, the injuries were numerous, and he spent the rest of the war in German hospitals. Photo: 24smi.org

In 1931, the bestseller was nominated for a Nobel award and was likely to get it, but a protest of the Union of German Officers impeded it, they claimed Remarque's novel ''insulted the German army''. Generally speaking, the absence of the Nobel prize didn't make Remarque less popular. Later, All Quiet on the Western Front was screened twice.

In Russia, Remarque is a writer of the ''thaw'' era. Three Comrades, The Black Obelisk, Arch of Triumph and, of course, All Quiet on the Western Front are favourite and discussed novels of the Russian intelligentsia in the 1960s. Remarque's novels became a desired ''taste of freedom'' for the Soviet reader.

Here is an interesting fact: according to the Russian Book Chamber in 2016, Remarque was in the top 10 published authors in Russia. The number of copies of his books reaches almost 1,5 million samples.

All Quiet on the Western Front is a testimony of twenty-year-old people who went through the wheels of war. Any war. At any point in the world. It's feelings of people who just begin to live, who are shown mud, blood and death. In this respect, the Hannover theatre's play is much wider than the history of WWI. When spectators entered the hall, the curtains had already been raised. A snow-white living room with silver picture frames on the walls and a white piano in the centre – stylish and elegant. A pianist in a long white dress comes out and plays several chords. This is where the idyll will end.

A story of yesterday's schoolchildren who turned out at the front and don't understand why they are here and who needs this all is the basis of the play. They will be joking like schoolchildren for some time more, look for food with laughter, but there are problems with food for the army, they will bluster. Meanwhile, they will also start asking questions without understanding who they are fighting against and why. For instance, why did a French craftsman fighting on the opposite side suddenly decide to ruin Germany? And we can say for sure that both the Russians and the French fighting on the opposite sides are asking the same questions. A pianist in a long white dress comes out and plays several chords. This is where the idyll will end

This world, which used to be cosy with a smell of potato pancakes and bean soup, doesn't exist any more and it won't exist. Even if peace comes, life will be different because it's impossible to forget the blood, the mud and the death, which though passed them by. This all will repeat in nightmares.

The staging of Remarque's novel is created in a way that it has less action and more stories about him, but it doesn't reduce the emotions of the play generated by the actors' challenging job. All five actors are easy and emotional and, most importantly, touching.

Lars-Ole Walburg made a provocative play full of naturalism for a big number of Russian spectators. But it's not scandalous behaviour for the sake of scandalous behaviour, not a desire to shock the public. We shouldn't write about ''200 litres of liquid running that resemble blood, and a dressed piglet'' when it comes to this play. Walburg's play isn't about it. It is about a desperate desire to live. It is about the fact that people from this ''lost generation'' are now living next to us – who survived the Afghan and Chechnya wars. And the play's silent question is: ''When will anyone pay for this?'' I am afraid we won't hear an answer to this in the short run.

Unusual silence reigned in the hall of the Kachalov Theatre, it seemed that nobody coughed, no chair creaked – this is how the play lasted for almost two hours without a break and ended with a long ovation. 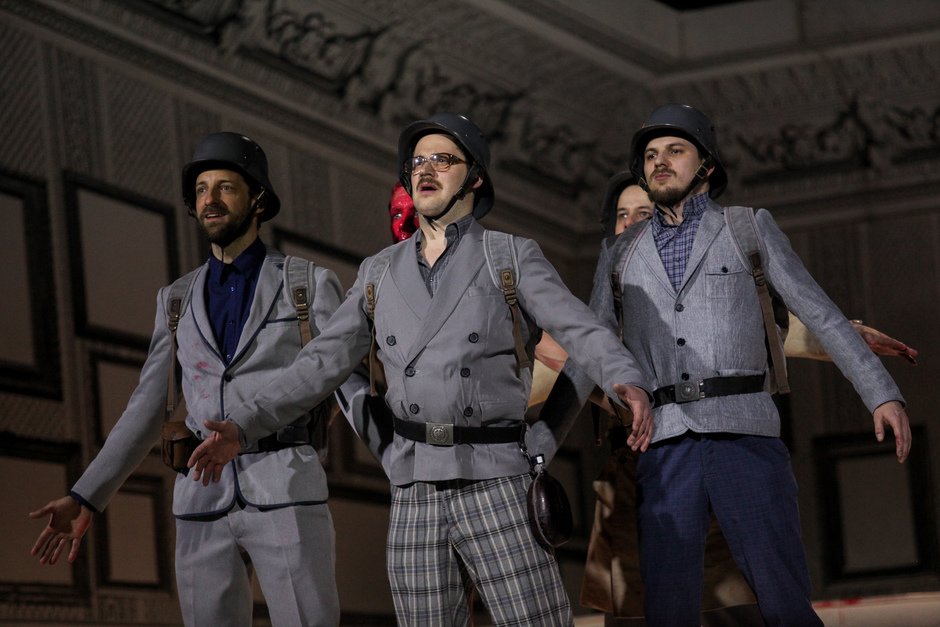