A round-table talk with representatives of the investment and construction complex of the city on preparation of the concept of development of the Tatarstan capital's city centre Kazan City Centre – Sustainable Development organised by the city administration of Kazan took place behind closed doors on 4 March. What potential investors and functionaries talked about remained a mystery, and what representatives of the executive committee and architect told about the concept seems to suggest that a document needs to be created, while business representatives welcomed this meeting without enthusiasm. Realnoe Vremya tells the details.

Head of the Tatarstan Investment Development Agency Taliya Minullina was the moderator of the meeting. She consequently gave the floor to the president's aide Olesya Baltusova, head of the urban executive committee Denis Kalinkin and head architect of Kazan Tatiana Prokofieva, according to their ranks, and they delivered standard speeches befitting the occasion. Kalinkin in particular emotionally urged investors ''not to destroy the city centre'' and ''to consider the citizens' interests''. While Prokofieva traditionally stressed the importance of ''clear game rules'' and stated that ''Tatarstan chose socially responsible investors''. Representatives of developing companies notably started to feel tense in the meantime, as a high social responsibility level here is closely connected with the necessity to sacrifice a project's profitability anyway.

Then there were two speeches that explained to the sharks of the construction business who were present what they would have to sacrifice and how much. Head of the design group (which is generally managed by Chairman of the working group Mayor of Kazan Ilsur Metshin) architect, director of Aksiom Architect PLC Oleg Maklakov told about the reasons for which they had to create a new document regulating Kazan's city centre in the next years. He also said that the first stage – analysis of the situation the concept will be based on – is about to come to an end, conclusions will be drawn on 10 June. Oleg Maklakov told about the reasons for which they had to create a new document regulating Kazan's city centre in the next years. Photo: kzn.ru

According to this task, investors who will want to implement projects in order to erect new buildings in old Kazan will have to adjust design solutions to strict requirements for style, height, silhouette and provide ''stylistic interaction with surrounding buildings''.

''As a result, low return parcels will appear,'' Oleg Maklakov demonstrated that he understood businesses wouldn't rush to invest money to build facilities perfectly befitting such a concept but with low profit and high prime cost.

In her report, head of the Tatarstan Investment Development Agency Taliya Minullina focused on trends of environmental development of old cities' centres. And here it became known that the elaborated concept wasn't able to cause an attack of optimism either among developers or laymen. Investors who will want to implement projects in order to erect new buildings in old Kazan will have to adjust design solutions to strict requirements for style, height, silhouette. Photo: Maksim Platonov

For instance, Minullina cited London's experience where there was imposed a toll for cars for crossing the city centre – and this reduced traffic jams by 20%. She frankly noted in brackets that this idea wasn't popular among Londoners, it would unlikely find approval from the citizens of Kazan. As well as the distribution of Barcelona's experience where it's planned to close 70% of city roads in the centre in the next four years.

The speaker told how some world capitals began to build earthscrapers in the centre in opposition to skyscrapers, that's to say, 10 floors below ground. For instance, in Mexico, a 65-storeyed earthscraper was buried in the ground. At the same time, it wasn't said how to plunge a building in the flooded soil of the Kazan city centre.

Minullina mentioned open public spaces without fences in the centre of Sharjah as a good example for Kazan. Then she provided an alternative to the personal car that is successfully applied by citizens of Amsterdam:

''Bicycles account for 48% of traffic in the centre. But it doesn't suit our climate…'' 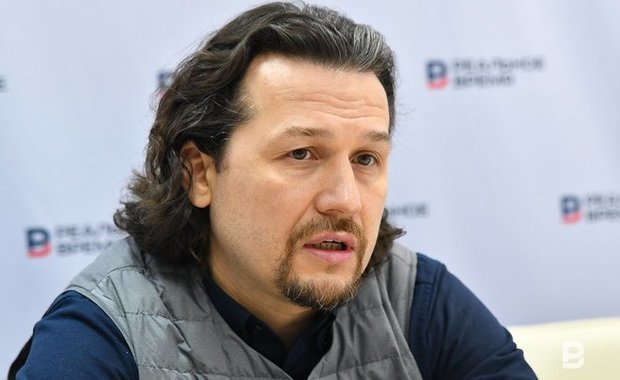 Svyatoslav Murunov: ''The creative youth are full of projects – here is new demand for public spaces designed not only for leisure and recreation but economic sites.'' Photo: Maksim Platonov

Head of Taliya the Centre for Applied Urbanism from Moscow Svyatoslav Murunov who talked after Minullina told about the experience of creating co-working in public buildings and in buildings of some museums that fell into disrepair, which are in demand among millennials who don't have a permanent job:

''The creative youth are full of projects – here is new demand for public spaces designed not only for leisure and recreation but economic sites. A designer, a lessee, a consultant need a park… Shopping malls stop being successful…''

Director of the Institute for Architecture and Design of Kazan State University of Architecture & Engineering Karina Nabiullina announced plans of the working group ''to elaborate mechanism and tools to stimulate private investors to take part in the beautification of Kazan'' and ''involve different groups of the population to the process of creation of new urban engineering documentation''. Numbers in her report were really valuable information:

''The average value of development projects on the territory of the Republic of Tatarstan is the following: the beautification of 1 hectare is from 5 to 15 million rubles, the beautification of 1 hectare with a building is from 300 to 400 million rubles. The area of Kazan's historical centre is 2,225 ha… The average distribution of investments in investment and construction projects in Tatarstan is the following: 20% are in budgets at different levels, 80% are private investments.''

The organisers of the round-table talk handed out questionnaires to the businesspeople who listened to the speeches of functionaries and representatives of the working group with unclear thoughtful faces to understand ''whom we have'' and asked to fill in them and hand in until 12 March. Then journalists were asked to leave the hall, and the round-table talk went on behind closed doors. In answer to Realnoe Vremya's correspondent's question about how the offered Kazan city centre's development concept met interests of businesses and if there were chances to attract at least one investor to this unprofitable venture, Karina Nabiullina replied in her rapid-fire interview that the idea's authors hoped to apply some public and private partnership schemes. In fact, it means that the benefits that businesses haven't received fully will be compensated from the country's pocket.

There wasn't any answer at all to the question how plans to attract investors to large-scale commercial projects in the city centre correlated with the problem of the absence of life there in itself, as the centre became non-residential. The newspaper's interlocutor just confirmed that this problem was topical in Kazan's centre and required a solution and she gave to understand there wasn't any at the moment.