''Kazakhstan is now like a powder keg, which can blow up at any spark of popular discontent''

President of Kazakhstan Nursultan Nazarbayev has dismissed the government. Shortly before that decision, he had sharply criticized the current composition of the Cabinet. Askar Mamin has been appointed as Acting Prime Minister of the Republic of Kazakhstan instead of Bakytzhan Sagintayev, and members of the government have been instructed to continue their duties until the approval of the new composition. At the request of Realnoe Vremya, well-known politician and former press Secretary of the government of Kazakhstan Amirzhan Kosanov expressed his point of view on the decision of Nazarbayev and the general situation in the country.

''The indicator of a crisis of super-presidential form of government''

In any other country, the event such as the resignation of the government would cause heated public debate and allow the people to make new plans for their future. But not in Kazakhstan.

And there's a reason for that. We live in the country with super-presidential form of government, where the important constitutional body such as the government is not a plenipotentiary, independent branch of power, but plays the role of the presidential administration department for implementation of orders of the president. Therefore, the change of one or another prime minister is of no particular importance and has no serious political consequences: the entire power is concentrated in the hands of the president, and all decisions are taken by him alone. Over the whole 27 years of Nazarbayev's presidency, 10 prime ministers were replaced. The arithmetic message about the sum of its parts, which does not change with the change of their places, has a pronounced political subtext in Kazakhstan. Askar Mamin has been appointed as Acting Prime Minister of the Republic of Kazakhstan. Photo: Bolat Shaykhinov (sputniknews.kz)

Some tend to associate this decision of the president with a sharp increase in protest sentiments in the society. Kazakhstan now resembles a powder keg, which can blow up at any spark of popular discontent and indignation. The president himself, justifying his decision to dismiss the government, speaks openly about it. And if earlier the government resigned at its request or in connection with the elections, now for the first time the president dismisses the ministers due to that they have not coped with their duties. And this is extremely revealing. With this maneuver, the president wants to relieve tension in the society and to shift the political responsibility for a decline in the standard of living of Kazakhstan from himself to the fall guys from the government.

But it seems that such step is no longer perceived by the enlightened society as unambiguously as the authorities would like it to be: many citizens do not see the resignation of the government and the advent of the new prime minister as a radical solution to their problems and are increasingly talking about the president's personal political responsibility for the overall deterioration of the situation in the economy and social sphere.

Such sentiments are becoming more and more decisive in Kazakhstan's society.

Given the fact that the country is being on the eve of presidential and parliamentary elections, the government cannot ignore such mindsets. Yes, it actually eliminated the official political opposition. But the protests have not become less. On the contrary, it is no longer professional politicians from the opposition, but various social strata (for example, mothers with many children) that become the driving force of ''humiliated and insulted'' Kazakhstanis!

It is no coincidence that in his statement on the resignation of the government, the president focuses on solving social problems. 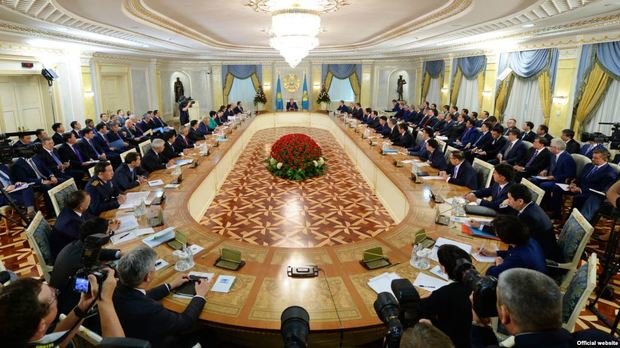 Most likely, the resignation of the government has been made solely in order to appoint a new person taking extraordinary powers and political prospects. Photo: ztb.kz

Although in today's situation, there is one point that we cannot ignore.

The president is 79 years old, he has ruled the country for already 27 years. In Kazakhstan, even the most loyal to the government experts openly discuss the issue of transit of power. The president periodically gives rise to the actualization of this topic. For example, he has recently appealed to the Constitutional Council about the possibility of resigning from his post (why not a reason for active discussion of the agenda set by the president?).

The post of prime minister is not only constitutional, but also the fourth in the table of ranks (after the president, speakers of the Senate and Mazhilis). On the eve of the Preemnik operation ('Successor'), the actual weight of each of these positions is being incredibly increased because they are destined to become direct participants in this hidden from the eyes of the society most important process!

In this regard, it can be said that most likely the resignation of the government was made solely in order to assign a new person taking extraordinary powers and political prospects. And the society is now waiting for such appointment.