Critic Aleksander Laskowski: ''The designer starts to play the key role in opera''

Music critic from Warszawa Aleksander Laskowski has programmes on the radio, writes fundamental works about music, initiates many music projects in Europe, he is a correspondent of London-based Opera Magazine. This year Aleksander has for the first time arrived in Kazan, to the F. Shalyapin International Opera Festival.

Aleksander, you watch a huge number of opera stagings. What's in vogue today?

I'd say there was once an era of the composer and the librettist, an era of great singers. Then, in the first half of the past century, an era of directors began. And now… I'm not always sure that the director is the most important person in a staging. At times the scenic designer is important, the lighting designer is important now. Of course, an opera play is a joint business of many talents, but the role designers are playing now is very important because many opera directors are very keen on cinema now, they try to copy something, be inspired by both classic cinema and modern-day films, while a designer is sometimes the only real creator, especially when a classic opera is staged. And mainly classics are staged. I think one should pay more attention to the designer because as a creative character he is often stronger than the director. As for directors, they often travel around the world, theatres.

Once the conductor was considered the key character when staging an opera.

And show me such a theatre where, for instance, a premiere is scheduled for April, and the conductor has been rehearsing a play since December every day. Once the conductor really played the key role working on an opera, but not now. Of course, there are theatres where the conductor constantly rehearses, rehearses with his orchestra, but there are few orchestras of this kind. Once the stagione system didn't exist, there were their own signers, and the conductor knew them, knew their possibilities, what they lacked, where they can be helped. But imagine such a situation: a new team is made up each time, the coach arrived for a match, while training is done by assistants. Such a team can play but it can't win, of course.

''Everything depends on talent''

Not all directors know how to read sheet music now.

There are many directors around the world who simply listen to music, while one should know how to read sheet music to stage an opera well, because notes and words are inseparable. And they can't do it. Though there is a big number of good plays around the world that such people stage. ''There are many directors around the world who simply listen to music, while one should know how to read sheet music to stage an opera well, because notes and words are inseparable.'' Photo: Maksim Platonov

Are you an opponent of operas that are often staged by drama directors?

I wouldn't like to speak ironically about it because everything depends on talent. There are directors who work well in both genres. One famous Polish drama director once staged The Magic Flute in Vienna and said afterwards it wasn't his world because he needed control over time, he needed pauses, while in opera the conductor and, by the way, the composer have control over time. And he decided it wasn't his thing. And well done. Of course, many drama directors are trying to stage operas now because it's in vogue, it's interesting and provides with good money. But I will repeat again that everything depends on talent.

What's happening now in the opera world of Poland?

Poland's opera world is very diverse. Stanisław Moniuszko's jubilee is this year, and a lot is done for this date. We revive his art, and a big number of musical experts fairly suppose that it's a great underestimated composer. For this reason many stagings of his operas, different operas are scheduled both this and next season, not only The Haunted Manor or Halka. He has an operetta and ballets, we will have it all. The interest in Paderewski's art is fairly reviving, his opera Manru, for instance, was staged in the Grand Theatre in Warszawa and then the opera moved to a theatre in Poznań. It's important because I think it's probably the most interesting opera in the history of Polish musical art.

What production tendencies are there?

There are such patriarchal theatres with their own company, such typical opera theatres, there are theatres working according to the stagione system – invitations of performers to a certain play. There are theatres where the director plays the leading role, for instance, Mariusz Treliński in Warszawa, in the National Opera. For example, in the city of Szczecin, in a small city, both modern-day and classic operas are staged. Kafka's The Trial has recently been staged there, the staging was very good. In general I think that opera should develop, we can't watch just La traviata or Aida. If our contemporaries aren't writing now, what will happen to the genre in a generation? Opera should develop. 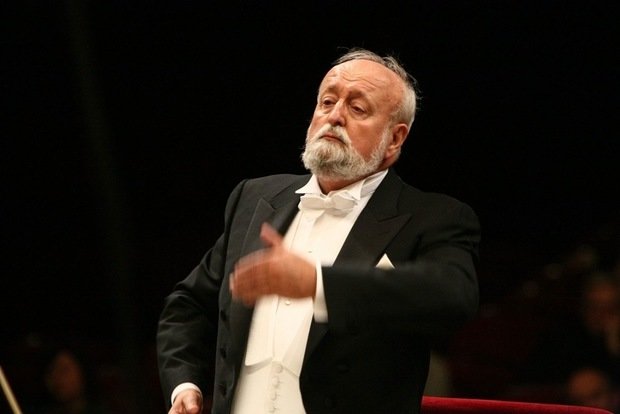 ''Penderecki's operas are a part of the world classics. It's live contemporary art, which leaves a strong impression on spectators, it touches and raises questions that are important for us today.'' Photo: culture.pl

Of course, he is an author of four operas, they are very good. Some are in Warszawa, his The Black Mask was staged in Gdańsk, in my opinion, it's the best opera of Penderecki.

Unfortunately, they don't go to Russia.

They don't, unfortunately. I think they should be staged. I know one of Moscow opera theatres have such plans. Penderecki's operas are a part of the world classics. It's live contemporary art, which makes a strong impression on spectators, it touches and raises questions that are important for us today.

Mojsze Wajnberg is in vogue now in Russia. How much is he loved in Poland now?

He is loved in Poland more than in Russia, of course. Here he is considered a composer who belongs due to circumstances to three cultures: Polish, Jewish and Soviet. His The Passenger is on the stage in Warszawa, The Portrait is in Poznań. We are talking with you now, while a concert of Wajnberg's music is held now in the Jewish Cultural Centre in Warszawa during this festival. Wajnberg comes from Warszawa, Polish culture and literature were close to him, he told about his fate, how the culture and the nation he belonged to was destroyed through music.

In general his The Passenger is about it.

It's about it, but I'd say he better expressed it in Symphony No. 8 Polish Flowers. I consider this symphony as a requiem to the destroyed Polish culture and Warszawa as a city. ''I liked the public at the festival very much. It's seen that people go to the theatre to be in a better world .'' Photo: Maksim Platonov

It's traditional stagings, very pure plays. The public likes when classics are staged, but on a condition that performers are good. From a perspective of performance, I liked the plays. Of course, Russian opera is more interesting for me, and this is why Boris Godunov made a stronger impression. But it's said the ''Polish act'' was a bit reduced because as a Polish it would be interesting for me to know how our history is shown. And I liked the public at the festival very much. It's seen that people go to the theatre to be in a better world.