Children of TAIF-NK PSC employees met with Ded Moroz, a Russian Santa Claus, and plunged into magical New Year tale. Last weekend, more than three thousand children took part in the theatrical performances organized by the oil refining company. The employees themselves waited for the New Year magic, and as it turned out — not in vain. On the threshold of the New Year, the company's employees were handed the keys to their new apartments. The oil company also did not leave without a gift the citizens of Nizhnekamsk, as usual decorating the festive New Year town in the most favourite place of citizens — the Square named after N.V. Lemaev.

For fairy tales — in the New Year

The most long-awaited holiday of the year for TAIF-NK employees is traditionally marked by a series of festive events. The company pays special attention to the organization of leisure activities for children. This year, TAIF-NK PSC has created the New Year mood for more than 3,000 children of employees aged from 3 to 14 years. During two days, the children were taking an active part in the theatrical show with fairy-tale characters Ded Moroz and Snegurochka (Snow Maiden), prepared by professional actors from the capital. The youngest guests of the festival plunged into the magical world of cartoon characters and energy dances with thousands of colourful fireworks of confetti. The older children danced to the most popular songs with Ded Moroz and Snegurochka, taking part in the silver show. By the New Year, all boys and girls under 14 years received from TAIF-NK memorable presents and sweet gifts. This year, TAIF-NK PSC has created the New Year mood for more than 3,000 children of employees aged from 3 to 14 years

On the threshold of the New Year, seven more employees of TAIF-NK PSC joined the ranks of happy new occupants. In the 49th district of the city of Nizhnekamsk, it was held a solemn presentation of keys to employees of the city-forming enterprises. The company's employees were able to improve their living conditions thanks to social mortgage programmes and additional mortgage programme implemented with the support of the Shareholder, which provides preferential bank rates and additional benefits for the company. On the threshold of the New Year, seven more employees of TAIF-NK joined the ranks of happy new occupants

The investor of the construction of the house No. 35 on Tridtsat Let Pobedy Street — the State Housing Fund under Tatarstan President. The house has 10 floors, two entrances, the total area of apartments is about 3,800 sq.m. All apartments are in fine finish — with interior and entrance doors, plastic windows, glazed loggias, plumbing, gas stoves, high-quality finishing materials, fire-extinguishing system. Each apartment is equipped with metres for water, gas, electricity, heat regulators. All apartments are in fine finish

The social mortgage programme is implemented in Russia only on the territory of the Republic of Tatarstan. It started in 2005 and involves providing citizens with affordable housing in high-quality fine finish in new buildings. In total for the period of 2005-2018, 759 families of employees of TAIF-NK PSC moved in new districts of Nizhnekamsk. The company plans to continue the implementation of mortgage programmes in the future, which will provide housing for all employees in need.

This year, the territory of the Square named after N.V. Lemaev in Nizhnekamsk as usual has been decorated with a sixteen-metre New Year tree in blue and white colours, specially brought from Moscow. Employees of TAIF-NK PSC turned the park into a New Year tale — in the square there ''settled'' reindeers and polar bears, dozens of live New Year trees decorated with led garlands. 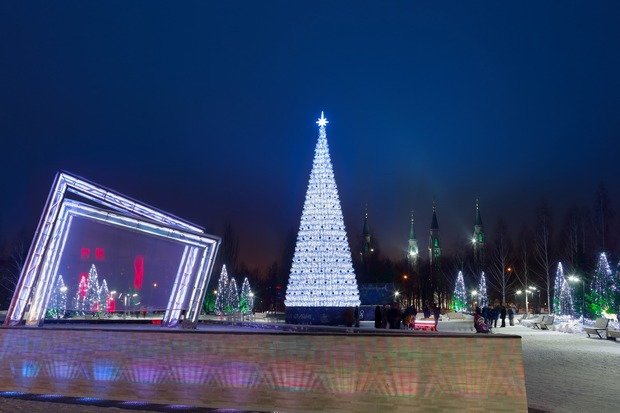 The territory of the Square named after N.V. Lemaev in Nizhnekamsk as usual has been decorated with a sixteen-metre New Year tree

Like in previous years, a giant New Year tree toy in the shape of a ball was installed on the square, which has already managed to catch the fancy of residents and guests of Nizhnekamsk. It is becoming the most photographed place in the city. Not only from neighbouring Naberezhnye Chelny and Yelabuga, but also from Kazan people come to look at the square. A giant New Year tree toy in the shape of a ball, which has already managed to make residents and guests of Nizhnekamsk to fall in love with it, has been installed in the square

The company has decorated the N.V. Lemaev Square for the New Year holidays for more than 10 years. Every year the specialists of TAIF-NK PSC try to diversify and add the original elements to create at the site real New Year's miracle for the citizens of Nizhnekamsk. The company has decorated the N.V. Lemaev Square for the New Year holidays for more than 10 years

The participation of TAIF-NK in various city events is always distinguished by high professionalism and sincere desire to please residents and guests of the city: if it is the decoration of the New Year's park, it will definitely be a real fairy tale. Traditionally, the leisure of employees and their families during all New Year holidays is thought out in advance. For them there will be free ice skating in the ice palace, swimming pool and football pitch in the Druzhba sports club for active New Year's holidays.

TAIF-NK company invites all citizens and guests of the city to the grand opening of the New Year town in the Square named after N.V. Lemaev, which takes place on 27 December at 6 p.m.