A Moscow citizen got the lucky ticket in the form of two-day tour for 170,000 rubles

The three millionth tourist was found in Kazan on the lottery, it's a citizen of Moscow. She will come to the capital of Tatarstan on 9 November. The city's tourism development committee prepared her a two-day tour with excursions to Kazan citizens' favourite places, a boat trip and ride on a helicopter and other pleasant bonuses, which cost the city 170,000 rubles. Realnoe Vremya tells what awaits the long-awaited ''jubilee'' guest.

The three millionth tourist will come from Moscow

Kazan is waiting for the three millionth tourist so much that even organised a competition with an award. Chairwoman of the city's Tourism Development Committee Daria Sannikova nervously drew the number with the name of the ''jubilee'' guest in the National Cuisine Theatre on 1 November. Daria Chipur from Moscow who will go to Kazan on 9 November was the winner. The woman was called on the speakerphone – the citizen of the oldest capital was very glad and surprised it was she who became the three millionth tourist of our city. Daria told she had been in the capital of Tatarstan in the summer and she liked it very much, now she had to go to the hospitable city for the second time.

Daria is promised to be welcomed in Kazan solemnly. Her programme is projected to have a two-day tour with sightseeing points, accommodation in a hotel, a masterclass in national cuisine and tasting of national dishes and other pleasant surprises.

''We plan to show Kazan in three dimensions: in the air, in the water and on the ground. This is why a flight on a helicopter above beautiful Kazan is expected, she will also visit our key tourist attractions: the Kremlin, Kazan Panorama Museum, Chak-Chak Museum. I will remind that we made up the programme in accordance with the opinion of our citizens. This is why the sites on the programme are the most favourite and popular among our Kazan citizens,'' Daria Sannikova told. Apart from the above-mentioned entertainments, the winner will have a boat trip on the Kazanka River with a view of the Kremlin, visit a nightclub to acquaint with the city's nightlife and a walk on the Kremlin Embankment.

The programme will cost about 170,000 rubles per person. But if the winner comes with someone else, the host will pay for her fellows too.

''We said at the beginning of the offer that if the three millionth tourist had a family, we were ready to pay for all family members,'' the head of the Tourism Development Committee explained.

From Moscow to Yerevan

Trip costs weren't included to the two-day tour for the three millionth guest. Moreover, in the application for the contest, it was compulsory to show the ticket you'd already purchased to confirm your serious intentions to visit the capital of the republic. The offer Become Three Millionth Tourist of Kazan was launched just a month ago. 316 people from 94 cities took part in it. According to statistics, citizens of Ufa wanted to be the winner the most – 53 applications came from there. The capital of the neighbouring region was followed by Moscow with 34 applications, Saint Petersburg and Yekaterinburg with 33 participants from each city. Two people from Tomsk and Surgut and one person from Yerevan and Astana took part in the offer from remote cities.

Among reasons why they chose Kazan, the contest's participants called making a proposal of marriage to their fiancée or, for instance, to acquaint with the homeland of her boyfriend, to taste local cuisine and talk with his grandmother whom he affectionately calls in Tatar.

The winner from Moscow told Daria Sannikova on phone she saw an ad of the offer on Instagram. In answer to Realnoe Vremya's question, the chairwoman of the Tourism Development Committee explained they used several resources to promote the competition. Bloggers arrived in Kazan a week ago to advertise it who covered the route of the three millionth tourist and wrote about it in their social networks. In addition, letters asking to publish information were sent to partner cities – Saint Petersburg, Novosibirsk, Nizhny Novgorod, Samara and twin towns in China and Turkey. The Russian Agency for Tourism also helped, it published the official release of the offer. ''We made up the programme in accordance with the opinion of our citizens. This is why the sites on the programme are the most favourite and popular among our Kazan citizens,'' Daria Sannikova told

Kazan might finish the year with 3m 260K tourists

Daria Sannikova told as early as October Kazan was waiting for its three millionth tourist in November. One of the mobile operators, which analysed its users' trip routes, confirmed the Tourism Development Committee's calculations. According to the company's representative Andrey Zolotaryov, they extrapolated their data on the number of users of other operators considering the volume of each one's market share. Then they concluded Kazan would cross the bar of three million tourists in November, while the share of tourists would increase by about 260,000 by the end of the year.

By the way, during the preparation of the research, the operator analysed visitors of Kazan Arena during the WC and found out the majority of fans at the stadium were from the USA (over 30%). Argentina was second.

Plus two million in 8 years

In conclusion, we will remind how Kazan developed in tourism. The capital of the republic crossed the bar of 1 million tourists in 2010, it added another million to it five years later.

A round record was expected last year. But it wasn't possible to reach the bar of 3 million guests – the number stopped at 2 million 750,000. The FIFA WC helped to make the dream come true this year. Thanks to the Cup, 2 million 650,000 people visited Kazan from January to August, which is 15% more than in the analogous period in 2017. 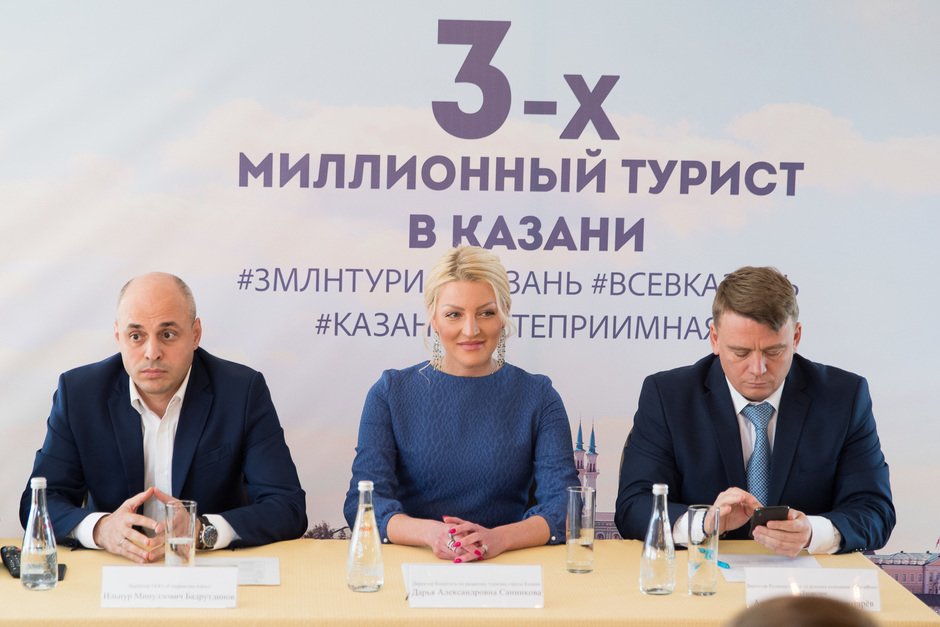