Kazan International Airport (KIA) is still confidently looking towards the Turkey destination, which has made a significant contribution to the growth of passenger traffic on international routes. We are talking about growth by almost a third. At the same time, Ural Airlines has slightly shifted the focus in flights from Kazan, giving priority to Asia instead of Europe. From domestic flights, the Siberian direction is actively developing. Realnoe Vremya has analyzed the winter schedule of the Kazan Airport.

Who keeps the ''window to Europe'' open

As it is known, the winter season is a difficult time for carriers owing to a decline in activity. The geography of flights during this season is quite interesting. So, long-time friends of Kazan have launched regular international flights. It is the national carrier Turkish Airlines, which included five flights a week to Istanbul. Anyway, there is probably more to come. Already in 2019, the Turks intend to increase the number of flights to the shores of the Bosphorus to seven. This was reported by the air carrier. ''Daily flights are scheduled for the summer navigation, which begins in March 2019. For the winter navigation from 2019, at the moment there are planned five flights a week,'' said the representative of the sales department of the North European region of Mahmut YAYLA airline, answering the question of Realnoe Vremya.

Contrary to skeptical judgments about the fragility of the coming of Czech Airlines in Kazan, which has announced the launch of flights to Prague in the summer of 2016, the Czechs continue to fly and gain a steady passenger flow. AirBaltic left in the winter schedule one flight to Riga. It is scheduled for November 17. According to the press service of the airport, in the winter season Belavia and Air Astana will continue to operate direct regular flights from Kazan to Minsk and Astana, respectively (flights were opened in the summer season). ''At the same time, work is underway to increase the frequency of flights to the capital of Kazakhstan to four per week,'' the airport's release notes. 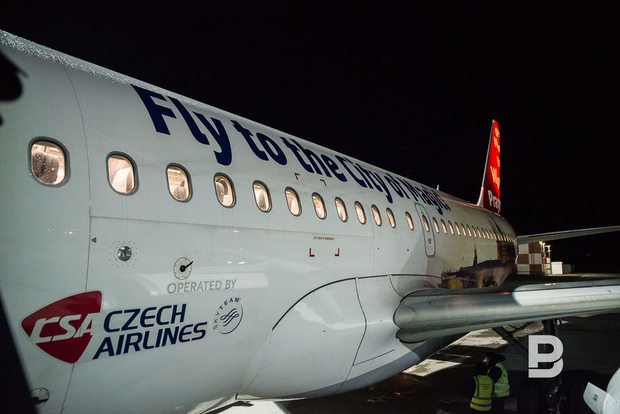 Czech Airlines, which announced the launch of flights to Prague in the summer of 2016, continue to fly and gain a steady passenger flow. Photo: Maksim Platonov

Even before the onset of late autumn, Russian Ural Airlines, the fourth largest passenger airline in Russia, almost completely curtailed the international flight programme from Kazan. As reported by the Federal Air Transport Agency, at the end of September the air carrier independently revoked the permission to perform several international flights. As follows from the order of the Federal Air Transport Agency published on October 9, Ural Airlines filed an application to terminate flights to Turkish resorts — to Antalya (7 times a week) and Dubai (3 times a week). At the same time, regular flights to Bishkek (1 time a week) and Beijing (3 times a week) were cancelled, the order states. Ural Airlines reserved the Italian flight to Bologna (about once a month). However, it was planned for a short period — until the end of October.

Exactly a year ago, when Ural Airlines launched international flights, they decided to cancel only one unsuccessful regular flight Kazan-Tashkent. With the end of the summer season, Ural Airlines thus cut its own programme of international flights from Kazan. The press service of the international airport Kazan in response to the request of Realnoe Vremya reported that ''in this case we are not talking about the closure of existing flights''. ''Let us note that flights to Beijing and Bishkek have never been operated by Ural Airlines from Kazan. The Kazan-Dubai flight programme was completed this May owing to the seasonality of this direction (the holiday season in the UAE is traditionally considered to be the period from October to April). Charter flights to Antalya were operated in accordance with the schedule. Also, the air carrier operates weekly flights to Moscow, Dushanbe and Italian Bologna,'' stated in the response on October 10. Ural Airlines explained the revocation of permissions of the Federal Air Transport Agency to these destinations by seasonal transformations. ''Ural Airlines has revised the portfolio of existing permissions as part of the route network optimization. These steps were taken on the basis of the seasonality of these routes and will not affect the total volume of cooperation between the airline and the international airport Kazan,'' the company reported. 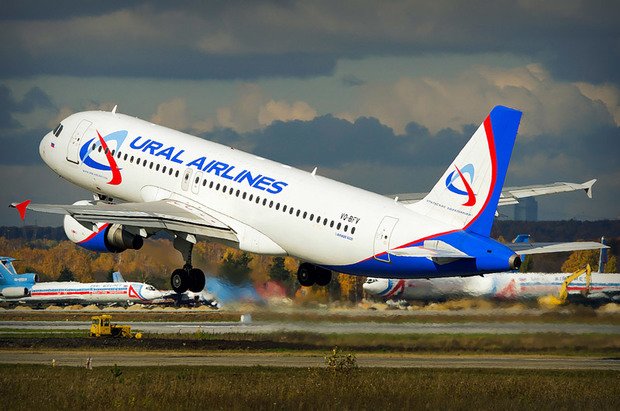 From the summer flight programme, Ural Airlines has preserved the weekly flights to Dushanbe for the winter. It is interesting that in this direction it failed to remain the only carrier, which airlines dream of. It will have to compete: Somon Air, Tajikistan's national carrier based at Dushanbe airport and operating international passenger flights from Khujand and Kulob, continues to fly from Kazan.

Ural Airlines has optimized the flights to Moscow. The schedule of the airport has one regular flight — on November 5.

Instead, Ural Airlines open new flights from Kyrgyzstan. The flights Osh-Kazan-Osh begin from 28 October. ''Russia and Kyrgyzstan have long established close political and economic ties, so convenient transport links are extremely important for the residents of both countries,'' the airline reported. Commenting on the perturbations in the air transport market to Realnoe Vremya, Director General of Ural Airlines Sergey Skuratov answered the question of Realnoe Vremya laconically, ''I love Kazan anyway.'' 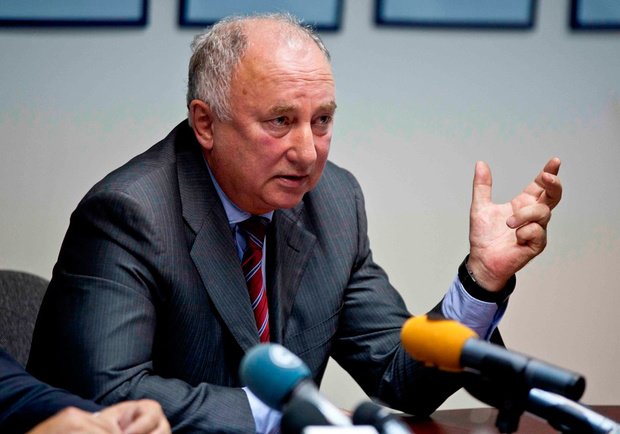 The phenomenon of Kazan is that Turkish Airlines broke records in terms of passenger traffic in the summer. If the capital's airports Sheremetyevo, Domodedovo and Vnukovo from Kazan there regularly fly 11 Russian airlines at different intervals, then 10 airlines operate flights to the Black Sea coast of Turkey. However, who was taken more — to Moscow or Turkey, is not disclosed. But at the end of 9 months, the KIA showed a record 27% growth in traffic with an overall dynamics of 10% growth. In just 9 months, the KIA reported on the transportation of 2,46 million passengers, of which almost 1 million accounted for international flights. Kurumoch in Samara and Ufa international airport transported 2,4 million. ''It is phenomenal, it is interesting,'' the head of the company Infomost Boris Rybak surprised.

The frequency of flights to the UAE is going to increase this season. In addition to Flydubai's four regular flights a week, Azur Air and Royal Flight have an extensive charter programme scheduled to fly to Dubai and Sharjah for the entire winter season. It is planned 30 tourist flights to Goa, which will be performed by air carriers Azur Air and Royal Flight. Nordwind Airlines will operate several flights to Krabi, Thailand in November. Also, the winter schedule traditionally includes flights to Utapao (Pattaya), Phuket and Cam Ranh. The novelty of the season is the flight programme Kazan-Tbilisi, opened by Georgian Airways this spring with regular flights three times a week. In this direction, its substitute will be the airline Pobeda, which plans to launch the route with a frequency of twice a week. 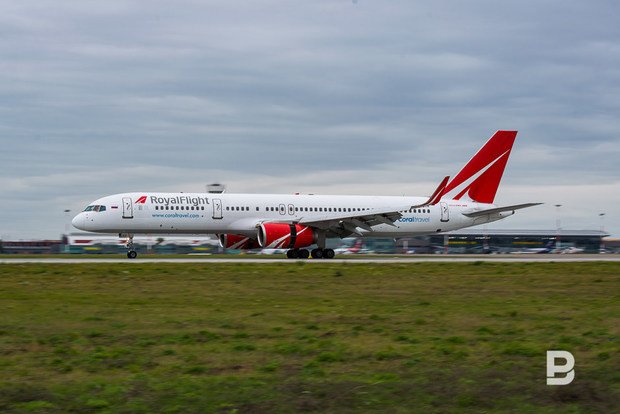 A surprise in the new flight schedule of Kazan Airport concerns domestic flights operated by UVT Aero. They are laid out only until 30-31 December, not as usual until the end of the winter season — until 30-31 March. According to Pyotr Trubaev, Director General of UVT Aero, the reason for this is that many flights are subsidized from regional and federal budgets, which are planned only until the end of the year. ''We are talking about flights Kazan-Tyumen, Kazan-Omsk and Kazan-Belgorod,'' he explained. ''These regions have free funds and they have announced such promo action. They appealed to the government: if your airlines have the possibility to operate these flights, then file the application. And we applied.'' According to him, these flights still need to run in to increase occupancy, but in any case, it is a good route.

''Earlier we used to fly via Moscow and the flights were more expensive. To this destination there operated Utair and Ural Airlines. With their withdrawal, we will not be able to change prices: these are subsidized flights, and tickets for them must be sold at a strictly subsidized rate. We can't change them,'' he assured. ''In addition, there are direct flights to Siberia: Kazan-Novy Urengoy, Kazan-Nizhnevartovsk, from St. Petersburg to Nadym, Bugulma-Noyabrsk. We have a lot of subsidized flights, we call them 'Tyumen North.''

The flights to Nizhnevartovsk and Novy Urengoy are usually filled. They fly to the oil and gas production regions, where more and more labour is required. From the very beginning, they differed with high load, because the cost of the ticket is comfortable for the Siberian regions (up to 6,000 rubles). Previously, we flew through other cities — Moscow and Yekaterinburg, and now it has become convenient.