The hillside near Kazan national cultural centre, covered with fresh green grass, in the near future may become a new place for photo shoots of Kazan citizens. Already today, young people strolling along the hillside stop to take a selfie or take a panoramic view of the right bank of the Kazanka River. Just a couple of months ago, this area was not so presentable. The builders had to remove more than 1,900 tonnes of garbage, more than 1,500 barrels of boxelder maple and lay 17,900 square metres of lawn. The ''green gift'' to Kazan has been made by TAIF Group and Tatnefteprovodstroy JSC. Realnoe Vremya has already written about this haunt and its transformation, today we will tell about the used technologies for the improvement.

The issue of improvement of the hillside adjacent to the Fuchs Garden was discussed already back in June 2017, when President of Tatarstan Rustam Minnikhanov together with the management of TAIF PSC examined the construction progress of the multistorey underground car park near Kazan NCC. The parking project included additional exit from the ground fourth floor to Podluzhnaya Street. From it, it would be possible to get to the Millennium Bridge, avoiding traffic jams in the city centre at rush hour. The stumbling block then was the stretch of the road from the tunnel part of the car park to Podluzhnaya Street with a length of 350 metres.

The dratf of the road project was ready and expected only approval from the Executive Committee of Kazan. At that moment, the management of TAIF Group offered Rustam Minnikhanov to expand the territory of the improvement to the Fuchs Garden. The proposal to increase the landscaped area to 30,800 square metres was approved at a visiting meeting this May. The work on the hillside of the left bank of the Kazanka River began already at the end of June. Rustam Minnikhanov together with the management of TAIF PSC examined the construction progress of the multistorey car park. Photo: Maksim Platonov

The renewal of the neglected site was carried out in several stages. First, the builders cleared the hillside from debris, uprooted and cut down the thickets of boxelder maple. The builders cleared the hillside from debris, uprooted and cut down the thickets of boxelder maple. Photo: Rinat Nazmetdinov

''The slope was neglected. We had to remove a dump of building materials, concrete, broken glass, brushwood. A stairway, which was in this thicket, was in an emergency condition. Footpaths on the slope were full of drawings, the asphalt cracked. We have replaced the stairway, cut down the thickets of maple. Only pines of valuable species have been preserved at the top of the slope, near the Fuchs Garden,'' told us Vadim Vlasov, Deputy Chief Engineer at Tatnefteprovodstroy JSC. On the slope, there was a dump of building materials, concrete, broken glass, fallen trees. Photo: Rinat Nazmetdinov

In total, half a hectare of land has been cleaned from debris. It took 200 KAMAZ trucks to remove the garbage from the improved territory and about 6,000 cars with soil to strengthen and form the slope. During all summer, 120 people worked for the improvement of the left bank of the Kazanka River — 25-40 workers alone were engaged in laying and forming the hillside. They spread the turf with their hands. The hard work took two months. A special difficulty was created by the fact that the grass had to be laid on a fairly steep slope. 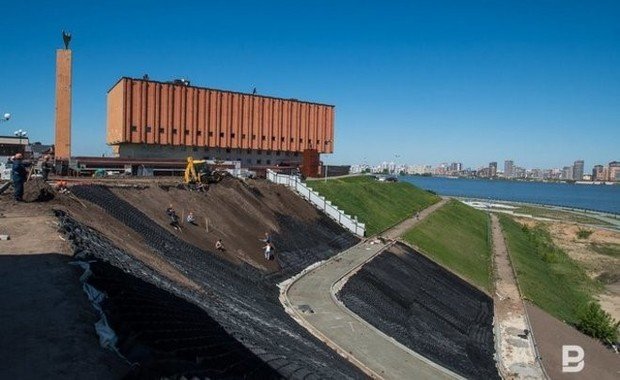 It took 600 KAMAZ trucks with soil to form the slope. Photo: Maksim Platonov

To strengthen the lawn, the workers used a geoweb.

The geoweb is the construction material of cellular form, made of geosynthetic polymer.

Geoweb in tension creates a stable reinforcing frame that allows to strengthen the soil. The geoweb cells were filled with black earth and grass was planted on the top. To keep it fresh, an automatic irrigation system has been installed.

Igor Kulyazhev: ''It is a valuable acquisition for our city''

Now the area near Kazan NCC cannot be called dangerous for walking, like it used to be. Eleven lighting poles have been installed on the once dark at nights slope, and the broken asphalt on the pedestrian paths has been renewed with fresh coating. The workers updated two kilometres of the sidewalk and 300 metres of the main road. Down along the tracks, they planted 10 bushes of pyramidal arborvitae to enliven the landscape. Forty road signs have been installed on Podluzhnaya Street and down the hillside. 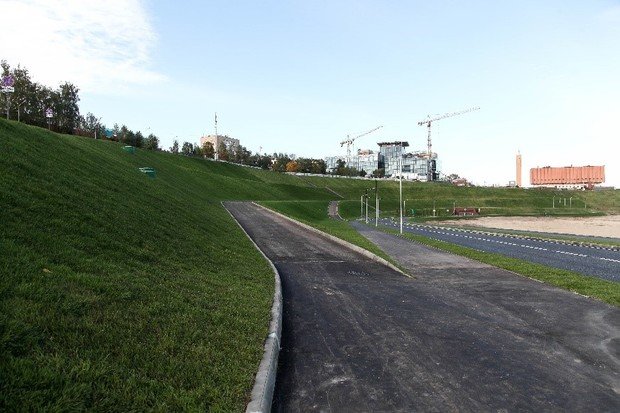 Now the hillside is ready to open. It offers a wonderful view of the right bank of the river — the thickets of boxelder maple and unsightly garbage background no longer prevent from enjoying the view from the Fuchs Garden. Deputy Head of the Executive Committee of Kazan, Chairman of the Committee of External Improvement Igor Kulyazhev thanked the group of industrial enterprises for ''the beautiful gift to the citizens and guests of the capital of Tatarstan''.

''Indeed, now the hillside looks decent. Previously, it was overgrown with wild maple, it was dirty, people drank alcohol here — it used to be a real crime zone. Now the hillside from both the Novo-Savinovsky District and the Fuchs Garden looks advantageous. Since it offers beautiful views, Kazan has begun to shine. It is a valuable acquisition for our city,'' said Kulyazhev.

A grand opening of the hillside on the left bank of the Kazanka River is taking place soon. Realnoe Vremya will follow the further improvement of this territory.