Eleventh graders will have a new subject, an offer to study the dilapidated housing eradication programme with Tatarstan’s history and the appearance of the Universiade in Kazan

The second meeting of History and Social Theory teachers took place in Kazan. Problems in teaching History of Tatarstan at schools was discussed there. This subject existed previously, tens of books were printed. But the new Federal State Educational Standard doesn't presuppose a separate class to study regional history. It's offered to be added to the general course, every region prepares a book for it. Almost all regions except Tatarstan have rewritten their history, the project's supervisors from Moscow sadly noted. Local authorities offered to pay attention to not only those who passed away but also who still rule Tatarstan in the new version of the book. Realnoe Vremya tells the details.

Teachers are urged to monetise knowledge

The second session of History and Social Theory of Tatarstan gathered 700 specialists. The event is held under the aegis of Kazan Federal University. Giving his welcome speech, the university rector noted KFU was the main supplier of teachers and prepared teachers for all school subject investing ''comprehensive knowledge, erudition, innovative thinking'' in them. He didn't forget the main problem.

''We need to teach people who orient in the world and can monetise their own knowledge and skills, that's to say, to find a well-paid job,'' said Ilshat Gafurov.

The question if the work of History and Social Theory teacher was so wasn't raised at the meeting. But the extremely important role of teachers of these subjects in the education of growing generation was noted. All responsibility for the correct, from authorities' point of view, outlook and ''sustainability'' of the probably political situation was on them.

''The teacher's labour is, in general, is incomparable with anything, while a History teacher's labour is also responsible in front of generations. Today we see the youth's ignorance of history makes them unstable. We can't have debates, discussions when we defend our excellence and advantages. This is why it's difficult to overestimate your role here,'' said Minister of Education and Science of Tatarstan Rafis Burganov. We need to teach people who orient in the world and can monetise their own knowledge and skills, that's to say, to find a well-paid job

History of Universiade and dilapidated housing eradication programme to appear at school?

Even if he isn't a teacher and started to work in education not a long time ago, Rafis Burganov dared to show gaps in teaching the subject and offered to reconsider the learning contemporary history of Tatarstan, so that schoolchildren would know not only those who passed away but also those who still rule.

''The 20 th-century history is rich in historical events. We study it with documents, materials. But I'd like to wish what I've faced myself – more research in contemporary history. I will explain: we got used to working with documents when information carriers passed away. For example, our republic in the 90s, thank God, our information carriers are alive. The contemporary history of Kazan began in 1995 when Kazan became very beautiful, and this beauty has its history. There is a history of the 1,000th jubilee, the history of the creation of the dilapidated housing eradication programme, the history of the historical centre. There are real understandable stories about where some events came from, how the Universiade, FINA World Championships appeared, how the FIFA WC arrived in Kazan. How GRP, which was smaller than GRP of Nizhny Novgorod and Samara Oblasts individually, has been more in total. This all has events behind that we can correctly add to history,'' Burganov offered.

The education minister also mentioned results of the August council of teachers. According to him, this year they've decided to do without traditional regional ratings, so that ''teachers won't fight against their neighbour's numbers, but, first of all, to have a better quality of knowledge every year than the previous year''.

''It's a very good idea when this fever is absent, there is no use of an administrative resource that breaks a creative approach to study a subject,'' said Burganov. This is why he didn't wish good luck in teacher's work but wished only ''personal successes, personal happiness and health''. How the Universiade, FINA World Championships appeared, how the FIFA WC arrived in Kazan. How GRP, which was smaller than GRP of Nizhny Novgorod and Samara Oblasts individually, has been more in total. This all has events behind that we can correctly add into history

''We don't have any solution in Tatarstan now''

The All-Russian Association of History and Social Theory Teachers is also concerned about teaching regional history.

''Regional history isn't very developed in Russia. It was always studied as Regional Studies – it's not Regional History. People who don't have a degree in History and who aren't familiar with historiography deal with regional studies. They are just fans of old things,'' Deputy Chairman of the association Denis Fomin-Nilov admitted.

At the same time, according to him, it's not correct to contrast regional with federal history because ''Great Russia formed thanks to the contribution of all races and regions of the Russian Federation.''

''If not Kalmyks, we wouldn't have won Napoleon. Nobody knows what a national regiment was bigger and helped to win. We should focus on the contribution of regions in great Russia,'' Denis Fomin-Nilov is sure.


New state educational standards don't presuppose a separate class to study regional history, it's studied in general history. The republic previously printed tens of Tatarstan History books for different grades. But they aren't used now. A new book is to add regional history to the general course. It's been printed in many regions. Fomin-Nilov particularly put an example of Bashkortostan and Crimea, but ''we don't have any solution in Tatarstan now'', the speaker sadly noted. The previously printed history books have a sore point. They were written according to the principle ''one author – one point of view''.

''Here we create a team of historians from a perspective of professionalism, we attract local content developers. Then we publish an online version in History e-magazine, spread it among teachers, accept remarks. Only then this material is printed on paper. We hope we will complete this work with our colleagues from KFU and be able to offer you the book on Tatarstan History, dear teachers,'' Deputy Chairman of the association Denis Fomin-Nilov told. A new book is to add regional history into the general course. It's been printed in many regions. Fomin-Nilov particularly put an example of Bashkortostan and Crimea, but ''we don't have any solution in Tatarstan now'', the speaker sadly noted

''Social Theory and History teacher's work is much more complicated than Biology, Chemistry, Physics teacher's one''

It's meant regional history will be studied once a week in the eleventh grade and as an elective course for first-year university students.

''It's needed to understand the place and role of one's own native region in general federal history at a more mature age. This course is also useful for first-year university students, as young people from other regions enter the university and know nothing about peculiarities of the region they will study and work in,'' said Fomin-Nilov.

KFU Rector Gafurov claimed ''he would certainly take advantage of this offer''.

''A big delegation of students from Japan has arrived here. And I was surprised when future engineers, doctors, IT specialists, first of all, asked to go to Bolgar, Sviyazhsk, Yelabuga. It took two weeks. I said: ''Why do you, future doctors, need this?'' They reply: ''It's how our programme works, we must know history and culture of the country we come to study in.''

The teachers were wished more patience and energy. ''Social Theory and History teacher's work is much more complicated than Biology, Chemistry, Physics teacher's one,'' said Denis Fomin-Nilov. These words are true, discoveries in physics are made once in 100 years, while history changes almost every day, just make time to print books. 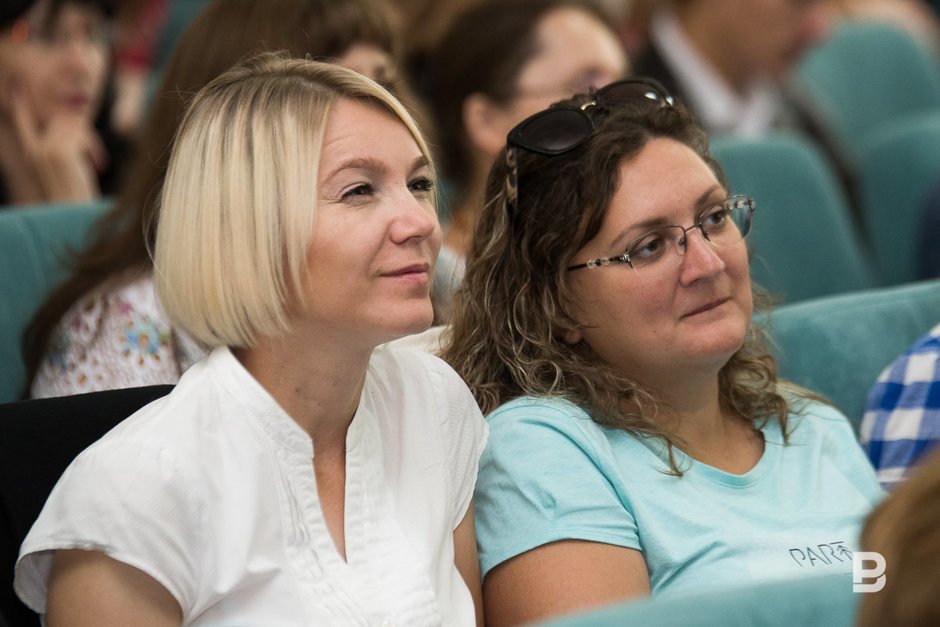