One UNESCO object more in Tatarstan?

The city authorities have recently announced almost sensational news: after the completion of the Kazan Cathedral construction, attempts will be made to include it in the list of objects protected by UNESCO. If this happens, what it will bring the city and how real the idea is – read in the material of Realnoe Vremya.

Crosses on the domes

The news that the cathedral under construction has a chance to become a UNESCO monument was announced at a meeting by Chief Architect of Kazan Tatyana Prokofyeva. Naturally, the erected shrine will become one of the places of pilgrimage because of its important spiritual component for the Orthodox believers.

The cathedral was lost in the years of godlessness, it was blown up in the 30s of the last century. As old residents remember, the roar was heard throughout the whole centre of Kazan, people came out of the houses, fell to the ground prostrated in horror. Later in the monastery complex there was a tobacco factory, the cells were turned into a communal apartment. In connection with the 1000th anniversary of the city, the ROC returned the Holy Cross Cathedral of the Mother of God Monastery and a male monastery was opened. 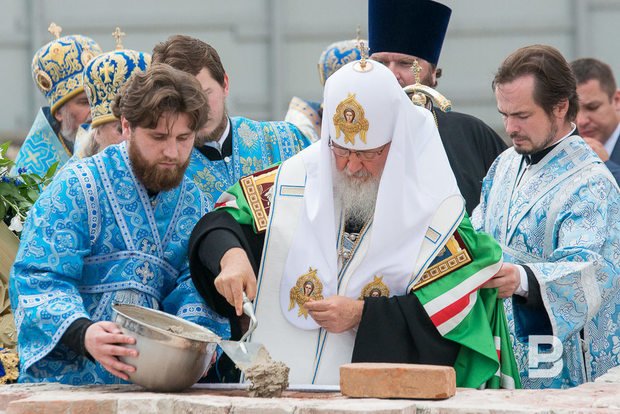 The foundation stone of the cathedral was laid on 21 July 2016 in the presence of Patriarch Kirill of Moscow and All Russia. Photo: Maksim Platonov

Its rector, hegumen Pitirim, built on the site of the finding of the image a small chapel, on the day of veneration of the Kazan icon they served the liturgy there. In July 2005, the miraculous list of the Kazan icon arrived in Kazan from Vatican — the gift to the city of Pope John Paul, earlier the image was kept in his private chambers. Now the icon is in the Holy Cross Cathedral.

Metropolitan Feofan, who came to the Kazan cathedra in July 2015, immediately spoke about the need to restore the destroyed cathedral. His words were heard by the president of Tatarstan, and on 4 November 2015 Rustam Minnikhanov signed the Decree on the construction of the Cathedral of the Kazan Icon of the Mother of God. The foundation stone of the cathedral was laid on 21 July 2016 in the presence of Patriarch Kirill of Moscow and All Russia. The construction of the temple is supervised by the Revival Fund, headed by Mintimer Shaimiev.

The pace of work is truly fantastic — the cathedral is almost ready, in the early summer of this year on the domes there were already crosses. Now the interior decoration of the cathedral in being under way, which is planned to be completed by November 4 this year, by as they call it ''winter Kazanskaya'' – let us remind that that during the year the Kazan icon is revered twice.

Certainly, after the temple is open to believers, it will attract a flow of pilgrims and tourists to the city. By the way, according to Metropolitan Feofan, it would be logical to establish a convent in the monastery, restoring historical realities, and the male monastery to remove to another place.

An interesting detail: under the main building of the majestic Cathedral of the Kazan Icon there is a small cave temple. It is just on the same level as where the miraculous icon was found. The money for its creation at the beginning of the last century was donated by Grand Duchess Elizabeth Feodorovna, canonized. She repeatedly visited Kazan and always visited the Cathedral of the Kazan Icon, once suggesting to build a cave temple under it. However, the upper cathedral was visited by almost all Russian monarchs, who made large donations. Under the main building of the majestic Cathedral of the Kazan Icon there is a small cave temple. Photo: Maksim Platonov

By the way, the new cathedral is built on the old foundation, fortunately, it survived the explosion. As for the cave temple, it also suffered from time, but generally preserved. It is being restored and after the completion of the work will be open to believers, worships will be performed here.

What is the Church's attitude to the possibility of giving the cathedral the status of a UNESCO monument? ''The Church has already had such experience, some restored churches received this status. A close example for us is the Assumption Cathedral in Sviyazhsk. Of course, if it happens, it will be the recognition of the holy place for us on a global level, because the Cathedral of the Kazan Icon, the place of finding of the miraculous icon for the Orthodox Church is one of the main places of spiritual attraction,'' rector of the Kizichesky Monastery in Kazan, Archimandrite Pimen, commented on the situation to Realnoe Vremya.

''It is hardly possible''

Including the object in the UNESCO List is not only the recognition of its special status, but also participation in international programmes, restoration and research ones. As a rule, after the object is included in this list, the number of tourists increases by an order of magnitude. Several thousand visits a day — this figure is called to date, when it comes to future visits of tourists and pilgrims to the Kazan Cathedral. If the object is recognized as a UNESCO monument, it can grow.

However, it is very difficult to get into the UNESCO list. It was so when the question concerned the Assumption Cathedral in Sviyazhsk with its unique frescoes, although historically and culturally everything there seemed indisputable.

''It is hardly possible. Recreated monuments are not included in the UNESCO List. I know there was the precedent with Dresden destroyed during the Great Patriotic War, when the city was recognized as a victim of the fascist regime, it is a special case. Now the construction of the Cathedral of the Kazan Icon uses the latest technology, new materials, everything has changed. All this can be an obstacle in the recognition of this temple as a UNESCO monument,'' director of the Sviyazhsk Museum-Reserve Artem Silkin commented on the situation to Realnoe Vremya. It is very difficult to get into the UNESCO List Photo: Mikhail Kozlovsky

Perhaps, the fears of Silkin are not groundless, although there is also the cave temple, that is, the direct place of finding the shrine, known throughout the world. The very place of teh finding with the monastery complex is an invaluable monument of Christian spiritual heritage.

It can be assumed that when the cathedral is opened, and this day is not so far away, the issue with UNESCO will become quite real. There is experience in working with UNESCO in the republic, and successful experience – Bolgar, Kazan Kremlin, Sviyazhsk. Perhaps, there will be reasons for the Cathedral of the Kazan Icon, for this place, a landmark for the Christian world.