''We have introduced a system of crumb rubber rejecting by colour, it is a joint know-how with a domestic firm''

This year the plant celebrates the 45th anniversary. What are results of the work over these years?

In recent years, we have paid much attention to improving the quality of commercial products, improving the working conditions. For this purpose, automatic systems for packing the briquettes were mounted: 30-kg briquettes were manually packed by packers, now it is operated by three robot packers. Last year, at the production facility of highly concentrated isobutylene, the process control system was completely updated to a more modern microprocessor technology. We continue to engage in the automation of the shop of rubber separation. We have introduced a system of crumb rubber rejecting by colour, this is a joint know-how with a firm.

Could you tell us a little more about this innovation?

In the process of drying of halobutyl rubber the crumb polymer has the property to adhere to the design of the dryer and under the effect of temperature changes colour. After some time, this polymer can get into the crumb stream and then — into the finished product. The properties of rubber compounds are not affected, but consumers want to see briquettes of uniform colour. We have established a system that rejects such crumb, and briquettes are obtained homogeneous. We turned to foreign manufacturers who produced such systems. They asked for a huge amount. We made our own system, which is cheaper and, at the same time, copes well with the task. Let's go back to the history. What was the reason for the decision to start the production of own butyl rubber in the USSR?

In the USSR, it was not easy to purchase imported products, butyl rubber was a very expensive and scarce product. In the 60s, it was produced by a Canadian company. Our manufacturers asked them for the technology, but they refused. In this regard, the technology of all processes was developed by domestic scientists from NIIMSK (Research Institute of Monomers for Synthetic Rubber), Yaroslavl. Butyl rubber was a strategic product, it is a special purpose rubber. It has a number of properties, such as gas tightness, which distinguishes it from general purpose rubbers, so its niche for the use is tubes. At the chemical plant, the first butyl rubber was obtained on July 28, 1973. At that time there were only two manufacturers in the world — Canadians and Americans, so butyl rubber was a deficit in the market. Thanks to this, our butyl rubber immediately went abroad, and still 90% of our products are exported.

Today you are in the top three world leaders in the production of butyl rubber. How hard is it to maintain the leadership?

The market has become difficult lately. Earlier, butyl rubber was a shortage and was presented by two manufacturers of this product. After Exxon and Lanxess, we became the third largest producer of butyl rubber, but now the situation is changing. Butyl rubber is in demand, so many companies are trying to produce it. Chinese companies that produce butyl and halobutyl rubbers are actively entering the market. Therefore, now, more than ever, there is a question of stability and quality of products. Consumers pay attention to everything, including appearance. How do your rubbers differ from the products of your competitors?

The range of products of our company and of our competitors is the same, but our rubbers have a slightly different set of properties. At first, consumers paid attention to these differences, but then quickly realized the benefits of our rubber. We have very little low molecular weight fraction in the polymer, which facilitates processing, but reduces its gas tightness. That is, with the same thickness of innerliner, gas tightness of our rubber is higher. At the same time, it is possible to reduce the thickness of the innerliner, and, consequently, to obtain the same set of properties, less rubber is needed, which is more profitable in terms of consumption rates.

''By and large, we are now cooperating with many tire producers from the top twenty''

You export 90% of the rubbers. Are all of them supplied to the five tire giant companies?

The companies that are among the five major tire manufacturers have been leaders in the global market for many years, but Asian companies are being on their heels. For example, two major Indian producers in the world output ranking each year are approaching the top five. We have always been proud that we work with the top five tire giants, and now we work with most of the major companies in the world. Asian companies are actively increasing the number of plants and expanding the markets. By and large, today we cooperate with many producers of tires from the top twenty. One way or another, they all use our products.

Why did you start producing food rubber?

At the time, both American and Canadian companies produced food rubber, but then there was only one manufacturer. Then consumers of food rubber came to us and asked us to become a supplier. We faced a great difficulty: food rubber is used as a binding basis for chewing gum, and rubber for the tire industry is not similar to it. To enter the market of food rubber, a huge work was carried out on the modernization of equipment, development of special technologies, training of personnel. We had to obtain numerous approvals of supervisory bodies and long-term certification, in total it took 3-4 years. But now we are proud to tell that we are a manufacturer of food rubber and when orders appear, we produce it.

It took a lot of time, but the share of food rubber in NKNK accounts for small volumes. Why was it necessary?

There are many manufacturers on the market today, and to maintain a foothold, the company must show the technology and the ability to produce such premium products. 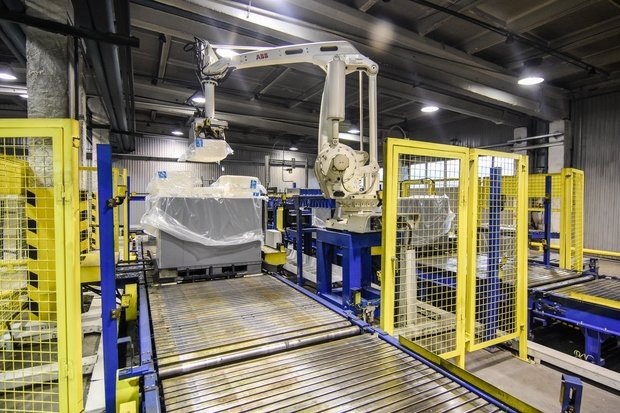 The plant actively shifts to automatic systems: earlier, 30-kg briquettes were manually packed by packers, now it is operated by three robot packers

At the beginning of the conversation you touched upon the topic of automation. Please tell us more about what is being done in this direction.

The plant has operated since 1973, and it is clear that in those years there were other requirements and there was a lot of physical work, but now we are actively departing from manual labour. For example, we use as a stabilizer the product that was previously imported in barrels, and during a day apparatchiks poured dozens of tonnes with special hand pump. Last year we built a node: now the boiler comes, and every few days we automatically drain this product in consumption tanks.

The transition to automation has affected the quality of products. Previously, when rubber briquettes were packed by people, sometimes packaging film was torn. Previously, the packaging film was polyethylene, but then the consumer needed a thinner film, which is easily processed. Naturally, the thinner film is, the greater probability of ruptures is, so it was impossible to do without robots. Robots put rubber briquettes very accurately, so when we started to use them, the problem immediately disappeared.

The plant will celebrate its half-century anniversary in five years. What goals do you set?

One of our main tasks is the production of high quality butyl and halobutyl rubber, which, accordingly, requires further improvement of production processes. I have told above that we are replacing control systems with more modern microprocessor technology, which will bring the plant to a higher level the regulation of processes. The plant turns 45 years old, and I want to say that in any production the main thing is people. We have a very good team, there were good teachers. Now there is a change of generations, young people come, the average age of the team is approaching 37 years. There are a lot of labour dynasties, and it is important that children replace their parents because it is our talent pool. In connection with the 45th anniversary of the production, I would especially like to thank the veterans! Thank you very much for that they have done so much for the development of the complex product! Thank to all services of Nizhnekamskneftekhim PJSC, together with which the staff of the plant performs all the tasks set by our management and consumers.