The labour of petrochemists working in Nizhnekamskneftekhim and Kazanorgsintez PJSC plants has been evaluated in Kazan. Tatarstan Prime Minister Aleksey Pesoshin gave state awards of the Russian Federation and the Republic of Tatarstan to the distinguished employees who have been working in the enterprises for several decades. Doctors, artists, designers, mechanical engineers, teachers and representatives of other professions also got honorary titles of honourable workers in the Kazan Kremlin. Realnoe Vremya tells the details.

''I'm 59, and it's pleasant to know there is someone who can substitute me'' The total work experience of awarded metalworker of Kazanorgsintez PJSC Nikolay Firsov is 37 years. He repairs and makes press moulds, stamps. ''A smooth work of plants depends on our repair shop. We take part in major overhauls, the movement of the whole production starts with our repair shop. We have a very serious job, we need to be careful, to have a big experience. I've taught several pupils, the latest was very talented. I'm 59, and it's pleasant to know there is someone who can substitute me,'' Nikolay Firsov told to Realnoe Vremya's correspondent. His daughter Svetlana Bochkova works together with him in the enterprise. She became a lab technician in Low-Density Polyethylene Plant.

Introducing new types of equipment into the production process, Valery Syomin made a priceless contribution together with the shop's collective to achieve high results in butyl rubber production. After the work done in 2015, the plant produced almost 127,000 tonnes of halobutyl rubber, a record high volume of 207,000 tonnes a year was produced in 2016. Fulfilling the production augmentation programme (to 220,000 tonnes a year) in 2017, the ninth polymerisation and outgassing system was put into operation under Valery Syomin. Valery Syomin's taking part in mastering new types of products. Production of rubber for food, which is in demand to make the binding base of a chewing gum, is one of the latest achievements. Valery Syomin is an active innovator of the plant, honourable chemist of the Republic of Tatarstan.

In an interview with Realnoe Vremya, he told he supervised the production of goods, their parameters, lab analyses in the enterprise. Valery Syomin admitted the experience of communication with people of different ages and characters helped in his work. ''I need to possess different information, I also study the youth, as more than half of employees in the shift are young, under 35 years,'' added the shift head of Butyl Rubber Plant's shop at Nizhnekamskneftekhim PJSC. He has been a teacher of young workers for a long time, some of his pupils occupy senior positions in the plant and have high achievements.

''To work with us, one should honestly treat one's labour''

Machinist of Compressor Units of the Butyl Rubber Plant at Nizhnekamskneftekhim PJSC Vladimir Turtygin got the award Honourable Chemist of the Russian Federation from Aleksey Pesoshin. His experience and knowledge of technology helped the collective when launching the third stage of cooling and condensation of return products and Neva refrigeration unit, which allowed to increase butyl and halobutyl rubber production to 107,7 tonnes a year. Vladimir Turtygin offered an optimal and economic scheme to fasten the units, the equipment was 5% cheaper for the factory than the project's cost sheet. During his work, Mikhail Cheburakhtin has trained over 20 operators

''We produce polyester resins. They're used in construction, for instance, spray foam is made of it. Foam rubber is also made of polyester resins after further conversion, mattresses are manufactured from it. Panels are made in the automotive industry,'' Mikhail Cheburakhtin enumerated. A chief operator's work is to control the work of subordinates and substitute them. ''To work with us, one should honestly treat one's labour. I've been working at NKNKH since 1983. I joined the enterprise immediately after seeing service in the army. My son also followed my example and works at Nizhnekamskneftekhim as shift head,'' Mikhail Cheburakhtin told in an interview with Realnoe Vremya.

During his work, the petrochemist has trained over 20 operators. In 2003, he was given the title Nizhnekamskneftekhim PJSC Veteran. Mikhail Cheburakhtin also participates in social life and chairs the styrene and polyester resin plant's football team.

The perfect labour of other Nizhnekamskneftekhim employees was mentioned in the Kremlin. So the title Honourable Rescuer of the Republic of Tatarstan was given to head specialist (on fire safety) of the Production Control of Industrial and Occupational Safety Administration Kamil Shigapov. Director of the Construction Department of Nizhnekamskneftekhim PJSC Damir Khalimov became an honourable constructor of Tatarstan.

Aleksey Pesoshin also gave respected titles of honourable workers to doctors, chemists, artists, designers, mechanical engineers, teachers and representatives of other professions. The prime minister thanked the awardees ''for the honest work, loyalty to their business''. The prime minister thanked the awardees ''for the honest work, loyalty to their business''

''Your daily labour for the good of Tatarstan makes a huge contribution to increasing the quality of life in the republic and social and economic development of our country,'' said Aleksey Pesoshin. He also noted the republic was among the leading regions of the Russian Federation in basic macroeconomic indicators. Tatarstan is 7 th in GRP, 5th in volume of investments in the main capital, 3rd in agriculture and 8th in retailing turnover. 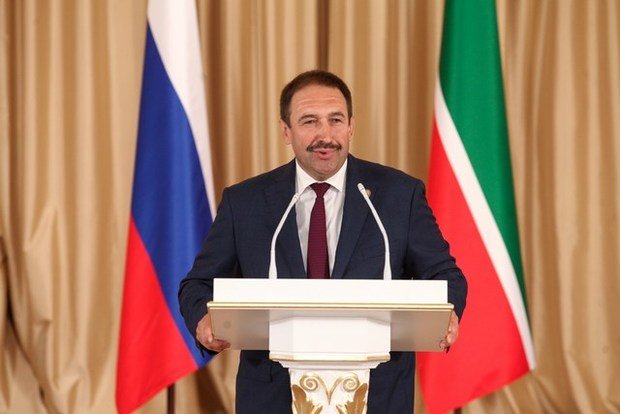 ''Tatarstan is 7 th in GRP, 5th in volume of investments in the main capital,'' claimed Aleksey Pesoshin

''Development of Priority Social and Economic Development Areas, which are four nowadays: Naberezhnye Chelny, Nizhnekamsk, Chistopol, Zelenodolsk, helps the republic to grow. It's planned to attract over 62 billion rubles of investments, create 17,000 working places on these territories by the end of 2027. In addition, the federal commission has recently approved the application to create an analogous territory in Mendeleyevsk,'' said Aleksey Pesoshin. ''Alabuga SEZ, Innopolis city of high technologies develop dynamically. It became possible to continue fulfilling big investment projects in uneasy economic conditions.'' A totality of 43 people received medals, titles, commendations and letters of gratitude

Having given the awards, the prime minister wished the guests health and added their talent, hard work, stamina made the republic and the country strong and prosperous. A total of 43 people received medals, titles, commendations and letters of gratitude.