May, friendship, Kazakhstan: what will new envoy of Tatarstan Denis Valeyev do?

The former deputy head of the Ministry of Industry and Trade promises to strengthen Tatar-Kazakh links and arrange trade, including transit trade with China

Former Deputy Head of the Tatarstan Ministry of Industry and Trade Denis Valeyev commented his appointment for the plenipotentiary ambassador of the Republic of Tatarstan to Kazakhstan for Realnoe Vremya and told about the circle of tasks to strengthen links of the two regions. The functionary from the famous Kazan family has an impressive career: from concert promotor and Timer Bank board chairman's adviser to the ministerial management and Tatarstan envoy on the international arena. Valeyev will go to the new place of work in the short run. Realnoe Vremya tells the detail what to expect from the new plenipotentiary ambassador in Kazakhstan and what steps he will take.

''I consider my appointment a big responsibility''

Last weekend, it became known that Deputy Minister of Trade and Industry Denis Valeyev left his post. The 39-year-old functionary is well known in Kazan as a son of famous journalist, ex-director of Azatliq radio Rimzil Valeyev and former vice-premier of the Republic Tatarstan and today's director of Kazan Kremlin museum reserve Zilya Valeyeva. Denis is also famous for his own successes, particularly, when he was the director of Biletti company, which he founded himself, brought foreign and Russian stars to the capital of Tatarstan: Scorpions, Elton John, Sting, Joe Cocker, Anna Netrebko.

Valeyev combined the concert business with his main work – he found a job in BTA-Kazan's PR department in 2014, later he became the adviser of Timer Bank's board chairman (BTA-Kazan after rebranding). In 2016, he came to the Ministry of Trade and Industry as Albert Karimov's deputy. This Monday, President Rustam Minnikhanov decreed he was the plenipotentiary ambassador of Tatarstan to Kazakhstan for three years. According to him, the main tasks are to develop cooperation in trade and investments as well as joint projects in industry. Photo: R. Kadyrov / prav.tatarstan.ru

''Kazakhstan is one of the most important foreign partners of Russia and Tatarstan. I consider my appointment a big responsibility. The task of the ambassador and other supervising departments is to strengthen and develop our cooperation – the cooperation between both state bodies and commercial structures because both regions have big economic interests. Kazakhstan is also an important transit state in trade between Russia and China,'' Denis Valeyev commented on his appointment for our newspaper.

According to him, the main tasks are to develop cooperation in trade and investments as well as joint projects in industry. The new plenipotentiary ambassador has already been to Kazakhstan due to his service as deputy minister of trade and industry of Tatarstan. He knows the local Tatar diaspora and promises to help in holding events there.

External trade turnover between Kazakhstan and Tatarstan was about $700 million last year. Petrochemical and machine engineering enterprises are the main players of foreign trade transactions. The Middle Asian country has offices of the biggest Tatarstan companies. ''Both our small and medium-sized business is interested in cooperation with Kazakhstan,'' Valeyev is convinced.

There are direct flights from Kazan to Astana twice a week. So the new plenipotentiary ambassador won't have to leave Tatarstan for long: ''I need to defend interests of our enterprises and deal with visits of Kazakhstan enterprises to Tatarstan,'' he says. 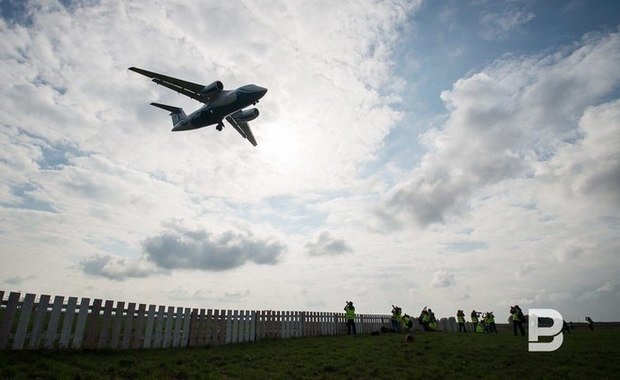 There are direct flights from Kazan to Astana twice a week. So the new plenipotentiary ambassador won't have to leave Tatarstan for long. Photo: Maksim Platonov

''We are fraternal peoples, we have a lot in common''

Kazakhstan politician and public activist Amirzhan Kosanov, who chaired the press service of the government of Kazakhstan in the 90s, complained that the activity of the representative office of fraternal Tatarstan hadn't been well known to a wide circle of the public in his country in the last years. This is why the expert expressed hope the new plenipotentiary ambassador would manage to eradicate this gap.

''We are fraternal peoples, we have a lot in common, and we would like our relations to be closer and public because publicity is a catalyst for bilateral interstate relations. Moreover, there is a big number of common topics: economic, social, historical. The role of Tatarstan in history of Kazakhstan is known when our great minds studied in your advanced universities. This is why I hope the arrival of the new plenipotentiary ambassador will give an impulse to the relations of the two regions because previously, sadly, they weren't so public and reflected in the public consciousness, what, to tell the truth, depressed,'' Amirzhan Kosanov said to our newspaper.

Yulduz Khaliullin, expert in Eastern studies, diplomat, correspondent member of the International Economic Academy of Eurasia and director of its office in Moscow, doesn't know Valeyev personally but thinks his appointment to Kazakhstan is quite successful: Yulduz Khaliullin: ''The person who dealt with trade and economic issues is, in my opinion, the best candidacy for this post because in this case, this sphere has a more important meaning.'' Photo: Maksim Platonov

''The person who dealt with trade and economic issues is, in my opinion, the best candidacy for this post because in this case, this sphere has a more important meaning. Based on business links of the two regions, one can draw certain political conclusions and develop contacts. Previously, I was the senior adviser of the Russian Embassy in Alma-Ata, made attempts to establish certain economic relations between Tatarstan and Kazakhstan (though it wasn't within my scope). Then it didn't work well, it seems it wasn't the time. And now we have good trade, economic, scientific links. Probably this will make a certain impact on the development of relations,'' thinks Yulduz Khaliullin.


We should remind Denis Valeyev has worked as deputy minister of trade and industry for 1,5 years – from November 2016. And he was even included in the composition of the recently created governmental council on consumer protection in Tatarstan headed by Aleksey Pesoshin. 27-year-old German Lerner became the new deputy head of the Tatarstan Ministry of Trade and Industry who will supervise issues of the foreign economic activity and development of the consumer market.