Voice of Kazan Kremlin: Alibaba in Innopolis, bonuses for businesses in village, and saving Mostootryad settlement

Lilia Galimova about cooperation with China, support of SMEs and high-profile problems

The representative of the Kazan Kremlin, Lilia Galimova, devoted her traditional weekly briefing to the trip of the Tatarstan delegation headed by Rustam Minnikhanov to China and the support of small and medium-sized businesses. But the press was more concerned about the issues related to the meeting of the anti-corruption commission the day before, where criticism was voiced against the ministry of health of the Republic of Tatarstan. Read the details in the material of Realnoe Vremya.

The expression ''localization of production'' in the first half of Lilia Galimova's speech sounded almost in every sentence. The Kremlin representative told about the plans of the two-day visit of Rustam Minnikhanov to China. On the first day, the delegation of Tatarstan was in Hangzhou, Zhejiang Province, on the second day — Xiamen, Fujian Province.

''The Tatarstan president pays special attention to the development of Tatarstan-Chinese relations in the context of Russian-Chinese cooperation, the republic's leadership makes great efforts to expand the ties, making every effort to develop relations at the regional level, especially the years 2018-2019 are designed to support interregional cooperation between the two states,'' said Lilia Galimova.

Tatarstan has something to celebrate: the president has visited China eight times since 2011, 29 events with the participation of Chinese delegation, including with President of the PRC Hu Jintao, have been held on the territory of our republic. Last year, the trade turnover between Tatarstan and China amounted to 565,5 million dollars, which is half higher than in 2016. Export supplies reached 260,4 million dollars, import — 204,6 million dollars.

Scheduled meetings were held at the management level of the provinces. Talks with representatives of Alibaba Group were held on the first day. In the city of Guangzhou, the technological development zone has been operating for already 25 years, where the company's head office is located.

''One of the key meeting has been scheduled for today. Back in 2016, the president of Tatarstan met with the founder and head of the corporation at the St. Petersburg Economic Forum. Rustam Minnikhanov is ready to offer to localize the production in SEZ Innopolis, as well as to open a logistics centre in the territory of Tatarstan,'' Lilia Galimova announced the plans before the meeting. Lilia Galimova devoted her traditional weekly briefing to the trip of the Tatarstan delegation headed by Rustam Minnikhanov to China. Photo: tatarstan.ru

Negotiations were be held with China's largest automotive company Geely, Tatarstan is also ready to provide a platform for localization of production for it. A similar offer was given to Hikvision, a global manufacturer in the field of video surveillance, with which the region has already established contacts.

''Within the framework of the projects ''Safe city'' and ''Safe yard'', about 11,000 cameras have been purchased. The republic is ready to offer cooperation through educational institutions, as well as to discuss the localization of production,'' the representative of the Kazan Kremlin named the prospects.

The next day of the visit to China, the proposals on ''localization of production'' did not end — there are also such plans for the companies King Long for the production of buses and XGMA, which is engaged in construction and road equipment. This is not the last visit to China in May — at the end of the month, a trip to Shanghai is already planned to participate in the opening of the third annual meeting of a new development bank, the structure of which was formed by BRICS countries.

The first place in the Volga region

Lilia Galimova switched from plans in relations with China to a summary of information on the development and support of SMEs in Tatarstan.

''A new support tool for rural entrepreneurs has been approved. They will get the guarantee of the Guarantee Fund of the Republic of Tatarstan with a fee from the remuneration at 0,5% per annum up to 70% of the amount of obligations. The maximum size of the guarantee is up to 70%, own security should be at least 30%,'' Galimova told about the new form of support.

Special attention is still paid to support of SMEs. There are only 169,238 SMEs in the region, and this figure is 2,5% on the national scale. About 75,000 accounts for small businesses, 93,000 — for individual entrepreneurs, 441 — for medium-sized enterprises. ''The share of medium business is very small, there are resources to develop the direction,'' Lilis Galimov said.

Despite negligible small amounts, the first place in the Volga Federal District by density of SMEs is occupied by Tatarstan, in Russia we are the seventh. Business incubators in Kazan, Chistopol, Naberezhnye Chelny and Yelabuga showed good results. ''The annual turnover is 1,7 billion rubles. 650 enterprises work in industrial parks, they produce 10% of the total industrial volume of Tatarstan,'' Lilia Galimova said.

It is already planned to introduce a new programme on industrial mortgage, when the business, taking a loan, will be able to enter the ready-made premises (a typical project of sandwich panels), and not spend time on construction. Besides, the president of Tatarstan has already considered the possibility of subsidizing the full cost of actually incurred costs for the payment of interest on the loan. The question has been raised within the framework of KazanSummit. Journalists, as usual, were concerned about other issues. One of them concerned the residents of the village of Mostootryad-3. Photo: kazan.mk.ru

Journalists, as usual, were concerned about other issues. One of them concerned the residents of the village of Mostootryad-3, who actually have no acceptable living conditions. This geographical name was mentioned after a recent fire in the industrial zone in Moskovsky district.

''We will take an appeal, contact the structures that work in this field, the theme is very tragic,'' said Galimov.

The meeting of the commission on coordination of anti-corruption work in the Republic of Tatarstan, which took place the day before, also required a separate explanation of Galimova. Former Minister of Healthcare of the Republic of Tatarstan Adel Vafin was particularly interested in the situation, at the time of heading the ministry of health he was in a state of conflict of interest.

''As for personal responsibility, in this case we say that a specific head of the ministry in the structure had a situation that caused questions from the anti-corruption department. In this case, the minister was responsible as the person who heads this structure, we are not talking about the fact that all that was announced yesterday was done with the minister directly or something else. It's about personal responsibility of the head of the structure for what is happening in his office. The measures are under way – it is court cases that have been initiated, about which you know. We know how one of these stories ended. During the speech, Mars Batrutdinov (head of the office of the president of Tatarstan on anti-corruption policy – editor's note) drew attention to the fact that there will be more attention from law enforcement agencies. Materials of the checks are transferred including to them,'' Lilia Galimova explained. 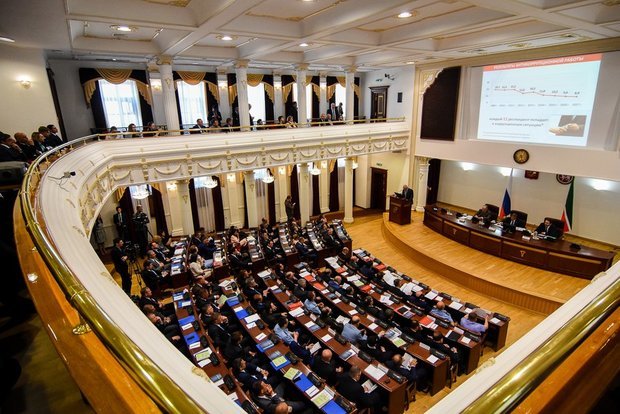 The meeting of the commission on coordination of anti-corruption work in the Republic of Tatarstan also required a separate explanation. Photo: Oleg Tikhonov

Following the results of the meeting, Minnikhanov asked to prepare a resolution within 15 days, which would include a road map that would build the work in procurement, land use, property issues. According to the declaration of conflict of interest, the Kremlin representative explained that Rustam Minnikhanov spoke only about the need to disclose all information and that everything should be transparent and meet the law.