These days the State Duma has postponed the consideration of the bill on amendments made to the Law ''On Education in the Russian Federation'' that guarantees the voluntary character of mother tongues and official language classes. Representatives of parliaments of national republics were against the approval of the document and sent an address to Vyacheslav Volodin. The bill caused hot discussions in the State Council of Tatarstan. Director General of TNV channel Ilshat Aminov gave an emotional speech. According to him, compulsory classes of regional languages is designed to strengthen the Russian statehood. In an interview to Realnoe Vremya, Aminov told that the postponement of the consideration of the bill was a good sign, deficit of multilingual specialists and their actions in the issue on the conservation of the Tatar language.

Mr Aminov, giving your speech in the State Council, you criticised the bill on voluntary mother tongue language classes and called it a ''sentence''.

Yes, and I can repeat. I'm filled with indignation because the law that's offered to be approved contradicts the letter and spirit of the Constitution of Russia. Our national policy has always been in the limelight of the public attention, it has always required a careful attitude of all public structures. But a group of State Duma deputies prepared the bill on the sly and introduced it to the Federal Law ''On Education'' without broad discussion where mother tongue classes become optional, in fact. Russia is a multinational country where indigenous people with their own language and culture have been historically living for centuries. I personally don't doubt the Russian people has a great mission – to unite people of different nationalities and strengthen the union of peoples in support of prosperity of our great Russia. People should understand that studying languages of Russian peoples, understanding and accepting their unique culture deeper, we strengthen the Russian state, we make its future stable and attractive for our children.

The bill on voluntary mother tongue and official language classes wasn't supported in Tatarstan. It's just limited to talks about its harm. What measures can be taken?

I'm convinced everyone needs to take certain measures locally. We have deputies from Tatarstan who were elected to the State Duma, they need to vote against this law.

But their number isn't so big…

It doesn't matter. Might everyone do it locally. To make it clear that it's not a unanimous law, it's a law that's harmful to national republics, it disrupts the basics of the constitutional foundation of Russia. If all deputies from national republics vote against, it will already become a position. I can't advise them, I just think they should vote against. The deputies from Bashkortostan, Chuvashia, Mari El, Yakutia, Chechnya, Dagestan, all national republics need to be against this law because it kills the concept of ''mother tongue''.

Why does it kill? Yes! That's it! The subject becomes optional, in fact, this is how I understand it. Our position is that we need to save the status of official language as compulsory for all children to study.

The official language or mother tongue?

The supporters of voluntary classes have another position. Yes, today a child is living in Tatarstan and studies Tatar compulsorily. But tomorrow he moves to Buryatia and will have to study Buryatian…

What's wrong with that? We're already tired of repeating that multilingualism develops a child's psyche and skills. Another thing is that there need to be options in programmes – for beginners and advanced learners… I don't see any problems here. We studied German in one school, then moved and started to study English in another school. Only German used to be studied in the countryside, in general. People moved to a city, only English is here.

But it's not comfortable for a child.

It's not, but one can improve. We are talking about at least two hours per week. We are already talking about this quantity of hours! I think our position is absolutely constitutional, we need to defend it as much as possible because the bill that's offered now leads to optional language classes, the displacement from compulsory programmes of national languages.

I even don't understand why one needed to raise this topic again. It seemed everything was brought in line, we established a middle ground. Now this element of deconstructivism is introduced in the public conscience again. Why does this law need to be approved? There is enough legal basis today to allow languages exist. We don't like how state standards in language standards have changed, in general, how the national and regional component was abolished – it absolutely doesn't comply with the legislative framework that exists. The concept of official languages has disappeared from educational standards, in fact. 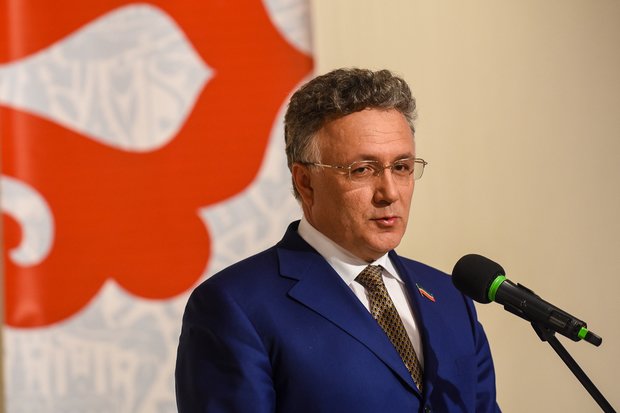 Because comfortable conditions to study languages were created there. And one should work on it.

And probably there must a sphere of application of a language.

I studied the Tatar language at school from the second grade. But I graduated with no skills. I learnt more Tatar when I came to work in Tatarstan State TV and Radio Company.

This is the answer to your question! The language problem is not just a problem of tastes. Do we need a mutual understanding? We do. Do we need mutual penetration of cultures? We do. How to understand a person if not through a language? The creation of single Russian society is possible only through a mutual penetration of cultures of Russian peoples, language is the carrier of them.

Why does it need to be done at school? Because schools became a source of the conflict, in fact.

There is no other place. A school gives the basics to a person. Orientation on the public space, communications, relations with people – everything forms there.

Do you agree with the statement that the level of teaching the Tatar language is low, methods aren't perfect? The language problem is not just a problem of tastes. Do we need a mutual understanding? We do. Do we need mutual penetration of cultures? We do. How to understand a person if not through a language?

By the way, not only Jews want to get there even if there is no choice of mother tongues – only Jewish, and it's compulsory.

Yes! We had Turkish lyceums, the competition was high there, and the Turkish, Tatar, English and Russian languages were taught amazingly there. This is the most important thing, but it will be difficult for us without a legislative framework. Yes, we also need to choose this road – to make these schools attractive, they must be the best, stand out in the region. It needs to be difficult to enter there.

I know that in one of the European countries if you decide to study a local language, for instance, the English language is a bonus – you can study it free. Can we take such measures to make the Tatar language popular?

We need to use all options. We need to pay extra for language skills. If you speak several languages, you need to earn more. If you know English and Tatar, there must be an additional payment to wage. There must be stimulation to study languages.

Will the Tatars have the trump card then?

Is there a deficit of Tatar-speaking journalists?

There is. The competition ''Go to TNV'' ended today. We will teach three people at our expense. We will work step by step, everybody will work locally. At the moment, I will fight to conserve the mother tongue now with preparing Tatar-speaking journalists every year.

What language skills do they come with? Do they speak an everyday or literary language?

They came with excellent knowledge, very good girls, the language skills are amazing. They all are from the countryside, of course. At the moment, I will fight to conserve the mother tongue now with preparing Tatar-speaking journalists every year

Last year's situation when parents were allowed to choose the language as Mother Tongue subject showed that many people need Tatar. About 70% of people across Tatarstan chose Tatar, and not only Tatar families were among them.

We have a very big number of sensible people, they understand that to live in peace and harmony they need to understand each other. Official languages will enable to communicate with other people better, prevent conflicts, help to feel comfortable. People understand that they need to study a language for the sake of harmony. While we have such a complicated country – federative – it's needed. I go to Chechnya and I need to know a bit of the Chechen language, to greet in Chechen. I will go to Dagestan, it has 14 official languages. Russia is a very complicated national pot. Is there another way? In this country, it works out only this way – to learn a bit to understand. We perfectly realise, of course, it's not easy to study Tatar, Bashkir, Chechen, Tuvan. Otherwise you won't make Russia a leading country in the world.