Rakhlin Seasons international festival dedicated to creator and first head conductor of the State Symphony Orchestra of the Republic of Tatarstan Natan Rakhlin opened in Kazan for the eighth time. So founder of the festival, head conductor and art director of the Tatarstan symphony orchestra Aleksandr Sladkovsky not only pays tribute to the predecessor's memory but also continues Rakhlin's traditions. The first concert of the festival made a surprise for the audience – in the style of Rakhlin. Realnoe Vremya tells the details.

During the traditional press scrum, Aleksandr Sladkovsky noticed that ''all combined: Rakhlin's traditions, the orchestra's birthday, the festival, the eighth one this year''. The fact that Nata Rakhlin's traditions aren't just a tribute but something alive and developing was really confirmed in the first concert. As far as it's known, Natan Rakhlin pampered and promoted young talents and helped many people to create their name in art. So young pianist Dmitry Ishkhanov was the soloist of one of the parts of the first concert of Rakhlin Seasons festival.

''Our selection of soloists is very serious, even our talented youth compete. This young musician already has titles, he is quite famous in Europe in his category. With his participation in the festival, I wanted to show that not only Moscow, Petersburg, Kazan but also other schools and directions existed. The sense of his performance for me is huge because, as far as you know, Mr Rakhlin was not only a great conductor but an educator. The fact that we present completely young musicians in this festival says about the continuity and conservation of traditions,'' Aleksandr Sladkovsky commented on the appearance of the young pianist's name in the playbill.

The orchestra's art director noticed that the State Symphony Orchestra of the Republic of Tatarstan gains mastery year after year, becomes recognisable not only in Russia but also abroad. For instance, the recording of Dmitry Shostakovich's all symphonies on Melody firm initiated Sladkovsky and done by the Tatarstan orchestra got the highest evaluation of European musical critics.

''We're happy to have conditions, support, incredible support because I know the situation even in Moscow, not to mention regions of Russia, it's very uneasy. I stand in front of the orchestra every day and say: ''Don't forget we live in a paradise.'' The sense of our work is to become better. If we can surprise with something, it's our mastery,'' noticed Aleksandr Sladkovsky. Young pianist Dmitry Ishkhanov was the soloist of one of the parts of the first concert of Rakhlin Seasons festival. Photo: vk.com/tatarstan_symphony

Before the first part of the concert, art director of the festival Aleksandr Sladkovsky addressed the audience in the overcrowded S. Saydashev Big Concert Hall: ''We play for you. We carry information that's available for people without translation. It's the most amazing thing of the arts, we always orient to the best samples of the world musical culture. The name of Rakhlin, his figure has not been studied completely yet. It was a person who not only adored music and played in the most unrepeatable way, it's a person who brought up a group of admirers, real music lovers, they've been carrying this culture for tens of years already. So today we are many, what confirms my words.'' Then the hall lastingly applauded those orchestra musicians who began to play when Rakhlin was alive and still serve music in the Tatarstan symphony orchestra and those who came to the hall as listeners.

The first part of the concert began with Beethoven – The Coriolan Overture. The energetic, hard beginning of the overture, in fact, was an application for further development of the plot where the hero will fight for power first then against himself and die in the end. The brutal play of the orchestra alternated with lyric chant and pauses, which seemed to have the doom of Coriolan's fight.

The second composition performed by the orchestra in the first part also belongs to Beethoven. It was the Piano Concerto No. 2. Dmitry Ishkhanov was the soloist. The young pianist went to Malta together with his parents at a young age where he started to learn how to play the piano at 4, now the boy is 13. He is a winner of many international competitions, participant of festivals.

Having included Beethoven's Piano Concerto No. 2 in the festival programme, Aleksandr Sladkovsky seemed to be paying tribute to spring, which hardly bursts this year. The young musician's play, which seemed to be led on waves of this spring music by the hard and confident hand of maestro Sladkovsky, is a joyful murmur of brooks, which were in despair during the winter, the play of birds' trills, flecks of the sun. The lyric nature, which is a characteristic of romantic Sladkovsky surprisingly coincided with this young pianist's pureness like that of Mozart.

The second part was in contrast with the first one. As maestro Sladkovsky said, Dmitry Shostakovich's Symphony No. 8 was performed ''first in the contemporaneous history of the orchestra''. We should notice that right Shostakovich was one of the people who supported the creation of an orchestra in Kazan by Natan Rakhlin. And Shostakovich is one of the idols of the current art director of the State Symphony Orchestra of the Republic of Tatarstan. 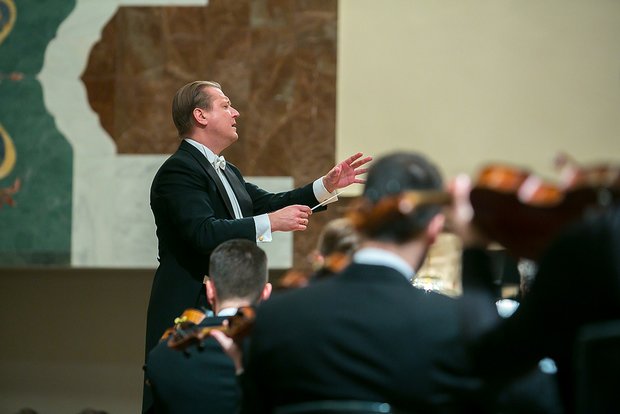 The second part was in contrast with the first one. Photo: Roman Khasaev

Shostakovich's Symphony No. 8 is one of the most tragic compositions of the composer without exaggeration. Written in 1943, it accommodates the terror of the war and the despair, and that there were colossal losses and still there would be, and nothing could change, the very composer's disease and misery, loss of friends, destroyed habitual world. Probably it could be illustrated with anti-war etchings of Goya where black colour dominates.

How drastically the conductor changed in comparison with the second part. He was like a stretched string inside, his grief was perceived by the orchestra. It seems he feels the composer's pain inside and delivers it to the listener. And Beethoven appeared again, the maestro seemed to lay a bridge to the Symphony No. 5 in an understandable way.

Immediately after the opening of the festival, Aleksandr Sladkovsky flew to Rome for several days, he will have concerts with Santa Cecilia orchestra there, he will conduct Russian music – Rimsky-Korsakov, Rakhmaninov, Tchaikovsky. The concerts of Rakhlin Seasons were to be on 11, 14, 17 and 20 April. Sensational programmes with Lukas Geniušas and Lucas Debargue are to come. And the concert on 17 April (conducted by Sladkovsky) will be transmitted online on Medici TV classical music channel.