Russian stock market has collapsed after US sanctions. Investors are selling off the ruble. 50 richest Russians lost almost $12 billion in a day

April 9, 2018 has become another 'black Monday' for the Russian stock and currency markets. Amid new US sanctions, which were announced at the end of last week, the domestic stock indices have sunk; shares of almost all companies, present on Moscow Exchange, moved to the 'red zone' on Monday. The panic of the investors provoked the sell-off of the ruble and bonds of the Ministry of Finance of the Russian Federation. How long it will take to restore the market is still unclear, but experts do not exclude that the situation will affect the population. Read the details in the material of Realnoe Vremya.

The news about sanctions has hit both individual companies and the Russian stock market as a whole. For example, the machine-building concern Sulzer (Switzerland) announced that it was going to reacquire some of its own shares from Renova Group of Viktor Vekselberg — the corresponding agreement was concluded on Sunday. The Russian company owns more than 63% of Sulzer's equity for now, after the deal the share will be less than 50%.

The sanctions affected the capitalization of VTB not immediately. At the end of trading on Friday, the value of the bank's shares increased by 2,7%. However, on April 9, it began to fall, which reached 10% in some periods of time.

The companies of Oleg Deripaska were affected significantly. Against the background of the sanctions, one of the members of the board of directors of his company En+ Group decided to resign. However, the businessman-controlled US Rusal, one of the world's largest producers of aluminum, suffered the most. On Friday, the shares of the company collapsed by 17,7%. Businessman-controlled US Rusal suffered the most. Photo: kremlin.ru

On April 9, US Rusal informed foreign investors that its inclusion in the sanctions list may lead to technical defaults on bond and loan issues. This provoked an even greater sell-off of the company's shares – over the trading day the fall exceeded 40%. In this regard, the Moscow Exchange was forced to limit transactions with the company's securities. In turn, the London Stock Exchange suspended trading with En+ securities due to sanctions.

''The fall of US Rusal's shares was not caused by the default message. The main point is the need of all American investors to sell them in a limited time due to the inclusion in the sanctions list of both the company and the shareholder. Until the sanctions are lifted, we see no reason to restore the quotes,'' says Denis Gorev, the asset manager at General Invest.

The panic spreading among investors had an impact on the Moscow Exchange's index, he notes. At 3:50 PM, the decline was 8,3% to the level recorded at the closing of previous trades; this is comparable to the daily fall that occurred on October 15, 2008. RTS index at the time fell by 11,08%.

Dynamics of stock quotes at 2:15 PM MSC on April 9 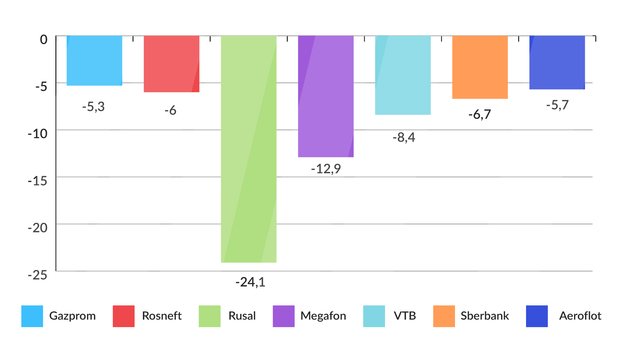 In addition, the panic led to the sell-off on the OFZ market, which eventually weakened the ruble against the dollar and the euro. RGBITR index (reflects the level of quotations of Russian government bonds) fell to the previous trading by 0,55%. The dollar updated the annual maximum over the day, fixing on the level of 59,4 per ruble/$; the euro – 72,8 ruble (3:35 PM).

The drop in the value of the companies hit the capital of Russian businessmen. According to Forbes, the overall financial performance of 50 richest people in Russia in one day decreased by $11,7 billion. Deripaska and Vladimir Potanin (Nornikel) lost the most — $1,3 billion. They are followed by Vekselberg ($908 million) and Senator Suleyman Kerimov ($813 million).

The US Treasury announced the expansion of sanctions against Russia on Friday, April 6. The restrictions were imposed on 26 people and 15 companies.

The reasons for the new sanctions were an attempt to 'undermine Western democracy' (apparently, Russia's alleged interference in the election of US President), cyber attacks, as well as participation in military conflicts in Ukraine and Syria.

The sanctions affect not only individuals and companies on the list, but also their potential contractors: they may be prohibited from raising funds from American banks and investors, own property in the United States and enter the country. As reported, Washington ordered American investors to sell off the shares of the companies under the sanctions by May 7.

The top managers and government officials fallen under the sanctions fisrt reacted in different ways to the news about the personal sanctions. For example, Alexey Miller told NTV that he has expected such decision: ''I didn't get in the first list of sanctions, there were even some doubts: maybe something was wrong. But no, finally I was included. So we are doing everything right.'' Nikolay Patrushev noted that the restrictions imposed by Washington would not prevent him to communicate with representatives of foreign states. ''I am already present on other lists. Nevertheless, we are engaged in international activities. And I think we are doing it effectively. I am visiting many countries,'' he said.

Andrey Kostin in a conversation with the TV channel Russia-24 called the sanctions 'a trifle'. According to him, they, probably, will prevent him to come to the session of The International Monetary Fund, but ''we will survive it'', ''There will be some inconveniences, but it is a trifle.''

''Analysts do not fully understand the consequences yet''

According to experts, real consequences of falling markets can be judged in a couple of days. However, it is possible that the sanctions may lead to a review of the ratings of Russian companies and the situation on the markets will affect the population.