Friendly Kazan: Rospotrebnadzor, the Tatarstan State Committee for Tourism, and market participants are agreeing on new price rules for hostels and apartment hotels

As it has become known to Realnoe Vremya, by the beginning of April 'the industry of budget hotels' of Kazan, preparing to receive fans for the matches of 2018 World Cup, will significantly change the cost of room renting. The impetus for the revision of prices was the warnings issued by the Tatarstan Department of Rospotrebnadzor of the Russian Federation, which found 25 hotels and hostels in unreasonable overpricing in online booking for this season. That's when a funny paradox was discovered: when 'selling' a bed for 800 rubles in a standard 10-bed room, the hostel inevitably falls outside of the 'red price' set for them at 3,400 rubles. So they have no choice but to rearrange spacious rooms in order to freely ask 1,700 rubles for one-night stay.

After Samara and Nizhny Novgorod, the Tatarstan Department of the Federal Service for Surveillance on Consumer Rights Protection and Human Wellbeing (Rospotrebnadzor) completed by the beginning of March the first wave of inspections of hotels in Kazan before 2018 World Cup. At this point, the industry of hospitality had already opened online reservations on their websites and on the tourist services Booking.com and Trivago.com. The prices for accommodation in hotels in Kazan on these resources turned out to be under the close supervision of the Tatarstan department of the federal service. The price monitoring, conducted daily, allowed the agency to identify online those who could not resist the temptation to raise prices above the level set by the government of the Russian Federation.

Let us remind that in February 2016 the Russian government determined the maximum cost of hotel rooms for 11 cities that host qualifying football matches and playoff of 2018 FIFA World Cup. According to the decree of the government of the Russian Federation No. 89, the cost of a room in three-star and two-star hotels (most visited) cannot exceed 9,060 and 6,360 rubles respectively, and the most expensive room in a five-star hotel of superior 'apartment' and 'suite' classes cannot be higher than 58,000 rubles. Gulnara Safina assured that the violations were revealed in those hotels that are not included in the association. Photo: Maksim Platonov

When checking the prices traded on the websites, Tatarstan Rospotrebnadzor revealed 25 hotels that unreasonably inflated the cost of accommodation, the press service of Rospotrebnadzor of Russia informed Realnoe Vremya. By the way, it is several times more than in Nizhny Novgorod, the only city of the Volga Federal District that turned out to be in the top five of anti-leaders with inflated rates of hotel business. It took six dishonest hotels for Nizhny Novgorod to get into the black list of the Federal Agency for Tourism (Rosturizm). After checking by the Tatarstan department, it was found that Kazan surpassed the 'champion' of the Volga Federal District. On the federal scale, more violations have been revealed only in St. Petersburg — 27 facts.

''The prices in Kazan hotels were inflated 3,5 times from the established price,'' the press service of Rospotrebnadzor described the scope of appetites of Kazan hoteliers to Realnoe Vremya. ''Most often, inflated prices are being revealed in hostels,'' she clarified. So, out of the 25 offenders of the 'pricing regime', 12 accounts for hostels and apartment hotels without a category (i.e. without stars). For them, the maximum price for multiple rooms has been established by the government of the Russian Federation at the level of 3,400 rubles, but in fact, it was established on the websites at above 12,000 rubles. In total, in Kazan there are 148 hostels whose room stock is about 4,000 beds.

Appetites of newcomers, or terra incognita

Despite a high number of cases of overpricing, the Tatarstan department of the federal service do not hurry to disclose the names of unscrupulous hotels of Kazan. It is known that among them there are no 'star' hotels with promoted brands. The president of the Kazan and Tatarstan Hotels Association, Gulnara Safina, assured Realnoe Vremya that the violations were revealed in those hotels that are not included in the association.

In turn, the head of the Association of Hostels of the Republic of Tatarstan, Ilya Tsykunov, also stated that among its members there are no violators. However, their names may appear later, when Rosturizm updates the 'black list' of 'greedy' hotels. Now it is publicly available, but there are no hotels of Kazan in it. 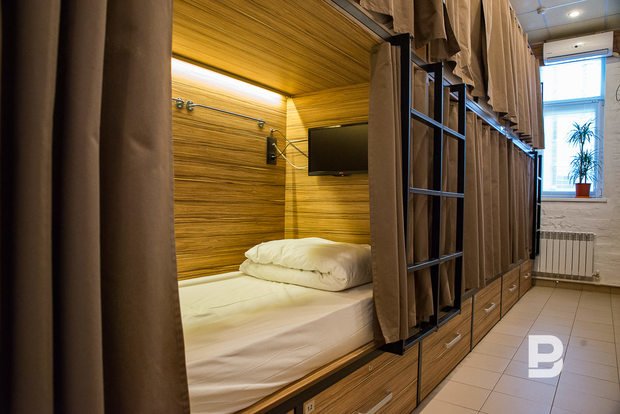 Fans are considered to be the most democratic tourists, for whom it is 'enough to eat and sleep'. Therefore, they choose to stay in cheap hostels. Photo: Maksim Platonov

Forgiven, for the first time

Moreover, the Tatarstan department of the federal service treated offenders quite 'gently'. While in other regions there was a wave of impressive fines, Tatarstan limited itself to mild warnings.

Fans are considered to be the most democratic tourists, for whom it is 'enough to eat and sleep'. Therefore, they choose to stay in cheap hostels. ''Foreign guests have long been accustomed to hostels. They book multi-bed rooms because it is still cheaper than individual rooms. The situation with domestic tourists is more difficult. Our fan is not used to the concept of hostel. For their part, there are more reservations for individual rooms. It is cheaper than a hotel, but the individuality remains,'' Ilya Tsykunov told about the preferences. According to him, today 70% of beds in hostels of Kazan have already been booked. ''Get ready for that here will be a lot of guests,'' he predicted a big influx of visitors for the matches of the World Cup. In Kazan, qualifying matches are held from 16 to 27 June, and playoffs on 30 June. World stars — the teams of France, Spain, Germany – will come to Kazan.

Why has the problem with prices arisen for hostels?

Paradoxically, but hostels will have to revise the prices and conditions of accommodation to fulfill the warnings. And it is necessary to make it without the least delay.

''Why has the problem with prices arisen for hostels? They have a priori multi-bed rooms — 8-10 beds. Each of them cost 500-800 rubles. In the end, the cost of a room cost 5,000-8,000 rubles. This is obviously above the price limit of 3,400 rubles. But it turns out that they already violate with their usual standard price of even 350 rubles a bed. Apparently, they have not taken into account the peculiarities of the hostel format. And the price limit makes their business notoriously unprofitable,'' Gulnara Safina explained the essence of the dilemma. Hostels will have to revise the prices and conditions of accommodation. Photo: Maksim Platonov

But why has this contradiction come to light only now, a few months before the World Cup? What about the fans staying during the Confederations Cup?

''You know, they made a fuss because of the apartments that cost over 300,000 a day in Saransk. We had a crazy offer in Kazan – 100,000 a day! Hence, the federal authorities paid attention to it because it casts a shadow on the whole industry. Tourist will carefully think before coming to Kazan! What is more, there will be an impression that we always have such prices,'' she explained. Indeed, the order of the president of the Russian Federation to check the prices in hotels followed at the beginning of this year, which ratcheted up total inspections.

According to Ilya Tsykunov, the head of the Hostels Association of Tatarstan, a way out should be sought in revision of the terms of renting. ''We have agreed that on March 15th we have a meeting of the leaders of the Tatarstan Department of Rospotrebnadzor and the Tatarstan State Committee on Tourism with the members of the association. Here we will try to agree on adequate figures,'' he said, but considered it premature to disclose the details of the upcoming decision on prices.


''But as for the prices outside the association, I cannot say for them. But we will convey the information to them,'' he promised. ''So they have no choice but to rearrange spacious rooms into small ones to freely demand 1,700 rubles a bed,'' said one of the participants of hotel business. According to Ilya Tsykunov, the solution should be sought in revising the conditions of room renting. Photo: Maksim Platonov

Few cheap accommodation offers in hostels of Kazan on hotel booking services left after the warnings. For example, on June 15th, the day before the qualifying match between France and Australia, on the service booking.com there are only 28 budget offers up to 3,500 rubles a day. Trivago is also not replete with a variety of budget variants. To comply with the regulations, Kazan hostels 'sell' either a double bed for 2,800 rubles in a single room, or individual rooms for 2,800 rubles each. There are no cheaper variants.