All stories come to an end one day. Even the ones that bring disappointment. On December 25th, the National Bank of the Republic of Tatarstan summed up the campaign for featuring Kazan on the new banknotes. At a specially organized press briefing, the press was presented the banknote of 2,000 rubles with views of the Far East, then it is expected the arrival of 200-ruble banknote with the sights of the Crimean Peninsula. Read about the new banknotes and past hopes in the report of Realnoe Vremya.

Real money for everyday use

The new banknotes of the denominations 200 and 2,000 rubles were adopted already on 12 October, but they reached Kazan only in December. The first cities to have the new banknotes were Sevastopol and Vladivostok, as well as Moscow, Khabarovsk and Simferopol. The choice of the Far East and the Crimean Peninsula for the debut is not a coincidence — 2,000-ruble banknote depicts the bridge connecting Vladivostok and Russky Island and the Vostochny Cosmodrome in the Amur Oblast; on the banknote of 200 rubles — the monument to the scuttled ships and the ruins of Chersonese Taurian in Sevastopol.

''These notes are not commemorative, and their issue is not limited. They are adopted along with notes of other denominations,'' said Pavel Soldatov, deputy branch manager at the National Bank in Tatarstan of the Volga-Vyatka Main Branch of the Central Bank of the Russian Federation. ''The new notes are legal tender on the territory of the Russian Federation. They must be accepted in all shops and businesses. But we understand that the issue requires market participants to adapt the ATM and POS equipment. It requires time. We are working closely with members of cash money circulation, and they try to conduct measures to adapt the equipment in the shortest possible time.'' 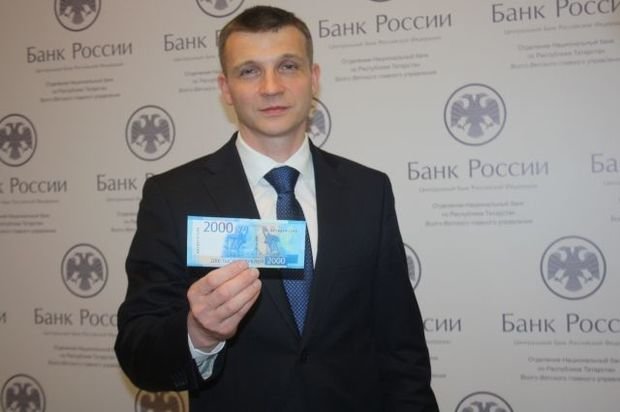 The adaptation of ATMs and banks will take time

As the National Bank of the Republic of Tatarstan stated, the equipment was preliminary tested on banknote samples. The full-scale work began in October, after the official presentation of the new banknotes and their release into circulation. This is consistent with international practice as the banknotes are developed in strict secrecy, which is necessary to counter the counterfeiters.

Most of the surveyed business representatives are not willing to reveal the final terms of adaptation. However, director for cash circulation at Alfa Bank Nadezhda Malukh in her commentary to Realnoe Vremya hinted that ''the banknotes of 200 and 2,000 rubles will come into our lives exactly as soon as the year 2018 comes.'' ''Alfa Bank is conducting a planned work on preparation of POS equipment and ATMs for the circulation of the new banknotes. The preparation process is coming to an end, and in the nearest time we will be ready to accept the new banknotes. It is a large-scale event for large retailers, which mainly work with cash, and here the quality of staff and equipment preparation is very important. We are to provide for clients a flawless operation with cash, and most importantly, to eliminate the risks of counterfeit. So I suggest arming yourself with patience,'' Malyukh said.

As the press service of the retailer M. Video informed Realnoe Vremya, ''the introduction into circulation of the banknotes of the new denominations of 200 and 2,000 rubles requires updating of the software of cash registers, as when calculating the cashier enters the number of accepted notes and coins in the corresponding to denominations special fields. Thus, when collecting the cash, the amount of physical money corresponds to the inventory in the printed transmittal sheet. ''M. Video has implemented the revision of cash register software as soon as it became known about the release of the new banknotes.'' 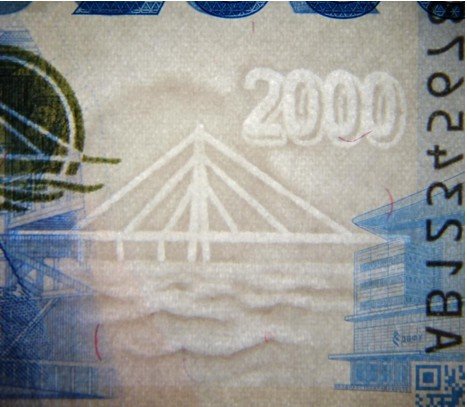 Innovations in the protection from counterfeiters

As reported by expert on banknote authenticity signs at the National Bank of Tatarstan Yulia Kamaeva, the new banknotes contain more means of protection. The 2,000-ruble banknote uses optical variable element — the golden ring with a picture of the bridge to the right of the center of the obverse. The ring moves when turning the banknote. This element is very difficult to forge, but it is very easy to check with the naked eye. Another item is an upgraded holographic thread (at acute angle it is seen the symbol of the ruble).

Among other security features: watermark, security thread, microprinting, latent characters. When you tilt the banknote there appears the symbol of the ruble: the dark on light background or light on dark, depending on the angle.

Manifesto of the international policy of Russia — in every wallet

Almost immediately the new banknotes became the subject of policy. On the one hand, after the adoption of the new 200-ruble banknotes, the National Bank of Ukraine banned the country's banks to conduct operations with banknotes and coins with the image of the objects of Crimea. On the other hand, the two new notes — the first Russian money with the coat of arms of the Russian Federation, and not the sign of the Central Bank, which is represented on the previously adopted banknotes. This step of the Central Bank, if desired, can be interpreted as a reaction to a propaganda campaign of the radical patriotic circles, who stated that the lack of state emblem on the money — a sign of the lack of sovereignty of the Russian financial system.

The geopolitical message may also be seen in the image of the island of Sakhalin in 2,000-ruble banknote, which many took as peninsula. As you know, in 1853-1856 Russia led the Crimean war against the world's leading powers, but the theater of war was not limited to Crimea. Petropavlovsk-Kamchatsky was subjected to the attacks the Anglo-French squadron. After a fierce defense they had to cede the Russian outpost in the Pacific, evacuating troops and civilians on six ships. The enemy went in pursuit, but to no avail. English and French naval commanders were sure that Sakhalin was a peninsula, in the result, the Russian squadron went across the Tatar Strait and fled through the mouth of the Amur river. 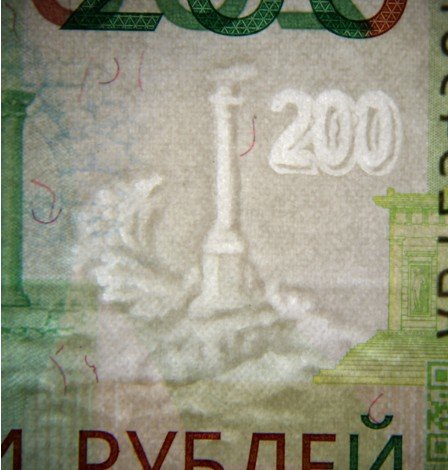