From sky to water: a scheme that Tatarstan is going to use in order to take control over a designer of navy ships

Realnoe Vremya found out Tatarstan is holding negotiations with the federal centre in order to become the owner of the Zelenodolsk Design Bureau. A future share of the republic in Russian Helicopters, which is to appear after the liquidation of Oboronprom, is considered as a possible option of exchanging. A correspondent of Realnoe Vremya looked into details of the intricacies of the exchange process.

We are not looking for easy ways

The Zelenodolsk Design Bureau, which was a part of the 'producer-designer' united technological chain of the Tatarstan shipbuilding cluster together with Gorky Plant, can be taken under control of the republic. Many mass media resources wrote about it. However, they mistakenly mentioned the money of Ak Bars Holding as a source of the purchase. As Realnoe Vremya found out, quite a complicated scheme is supposed to be used.

A source, which is close to the administration of the Cabinet of Ministers of Tatarstan, told the transfer process is likely to be linked with another procedure – liquidation of Oboronprom state enterprise. The republic holds about 5% of its shares.

'Tatarstan is likely to get an analogous share in Russian Helicopters during the liquidation of Oboronprom. As a result, this share will be given to Rostec. We asked to exchange this share for the ownership of the Zelenodolsk Design Bureau and other assets. As the price of the share in Obronoprom is higher than the block of shares of the Bureau, the deal presupposed a transfer of other federal assets to the republic too,' the interlocutor stated. But he did not tell what assets we were speaking about.

The director general of the Kazan Helicopter Factory Vadim Ligai knows about the reorganisation of Oboronprom. He explained Realnoe Vremya that, indeed, Tatarstan holds a share in Oboronprom that will be converted to the shares of Russian Helicopters. The Republic has never participated in its capital. The head of Kazan Helicopters did not tell any details of the deal on the exchange of shares of the Bureau. 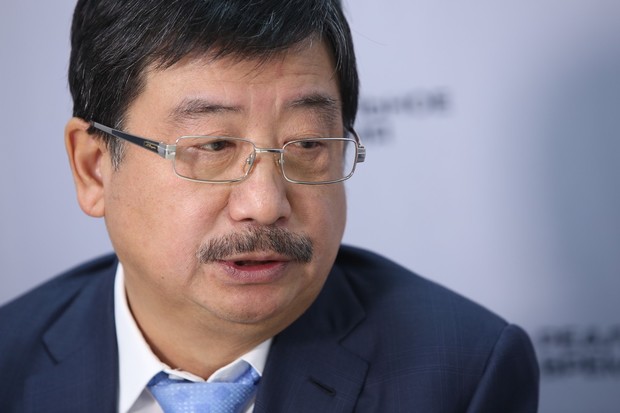 Vadim Ligai explained that, indeed, Tatarstan holds a share in Oboronprom that will be converted to the shares of Russian Helicopters but did not tell any details of the deal on the exchange of shares of the Bureau. Photo: Roman Khasaev

Dreams of their own designer

Talks about a possible annexation of the Zelenodolsk Design Bureau to one group with the Zelenodolsk Plant named after A.M. Gorky started this spring. Minnikhanov met with the head of the United Shipbuilding Corporation JSC Aleksey Rakhmanov. Details of the meeting were not made public. The only thing that was specified was that they talked about the cooperation of the enterprises of Tatarstan and the United Shipbuilding Corporation.

After the ceremonial launching of Gepard-3.9 for the Vietnam People's Navy at the end of April, a correspondent of Realnoe Vremya asked the deputy director general of Gorky Plant Aleksander Karpov what stage the discussed question of the swallow of the Design Bureau by the plant was at. The interlocutor of the newspaper explained purchase of shares of the Bureau by Ak Bars Holding, not its annexation, was chosen as the best option.


'So, we take them under our wing. In other words, we both are a part of Ak Bars Holding. They will be an independent unit with their own bank account. We came to an agreement with the United Shipbuilding Corporation. In general, they are ready to sell these shares. I think the deal is due to be made this year, and there will be some clarity,' Karpov told. 'Initially, it was supposed to be annexed to the plant. But what for? It is a good organisation that recommended itself in a certain market. When we are in one holding, it will be clear we won't have any quarrels, and Rakhmanov won't influence our Zelenodolsk Design Bureau.' Aleksander Karpov explained the purchase of shares of the Bureau by Ak Bars Holding, not its annexation, was chosen as the best option. Photo: Roman Khasaev

It should be noted indirect signs of a possible compensation for Tatarstan if the region leaves the federal holding appeared during the Saint Petersburg International Economic Forum. It was known the Russian Direct Investment Fund and some Arab investment funds signed an agreement with Rostec on the purchase of the blocking stock of shares of Russian Helicopters for $600m. RBK informed about it. Earlier the head of Rostec Sergey Chemezov told about negotiations with Mubadala Development that belongs to Abu Dhabi. In the beginning, it was told that the foreigner managed to buy up to 49% of the shares of the helicopter holding.

Commenting this sensation, the deputy director general of Rostec Sergey Skvortsov told Russian Helicopters is going to sell its shares to not only Rostec but also Tatarstan that holds about 5% in the capital of the company. He explained that about 16% will be given to investors via an emission of new shares. The Arabs will be given preferred shares that will limit their influence on the management of these defensive enterprises.

We did not manage to have any comments in Rostec and the Ministry of Agriculture of Tatarstan.

In 2008, the Minister of Land and Property of the Republic of Tatarstan Valery Vasilyev told the republic and Oboronprom PJSC signed an agreement that was to protect the region from additional emission. The share of Tatarstan was to be higher than 15% of the authorised capital. But the agreement was not reached. In 2011, according to the data of the annual statement of Oboronprom, the share of Tatarstan was only 7,5%. The major part of Oboronprom – 73,9% — belonged to Russia in the name of Rostechnologii GC, 8% — MIG Russian Aircraft Corporation JSC, 6,9% — Rostechnologii GC, 3,1% — Rosoboronexport, 0,6% — Rostvertol.

The share of Tatarstan shrank in 2013. The annual report for 2014 illustrated Rostec held 50,43%, the state in the person of Rostec had 37,59% (they are written separately for some reason), MIG owned 5,01%, the Ministry of Land and Property of Tatarstan had 4,67%, Rosoboronexport had 1,92%, Rostvertol had 0,38% at its disposal. In 2013, the holders and their shares did not change. The only difference was that the state started to hold shares via the Federal Agency for State Property Management, not Rostec.

According to the data given by the Federal State Statistics Service, now the share of Tatarstan in the authorised capital of Oboronprom is 4,67%. It is estimated at 1,455bn rubles. Russian Helicopters are likely to be given to Rostec during the liquidation of Oboronprom. Photo: bricsmagazine.com

At the end on May 2016, the Ministry of Land and Property of Tatarstan decided to sell its 1,46m shares to the authorised capital of Svyazinvestneftekhim (SINKH). It was supposed to do it by means of an additional emission of the shares of the company. The process has not finished yet – the Ministry of Land of Property is still meant to be the owner of the share of Oboronprom.

Let us say the information that Russian Helicopters JSC (under control of Rostec) is going to carry out an additional closed emission appeared in May. According to the mass media, t he company is ready to sell up to 53,% of its increased authorised capital for 60,3bn rubles. However, only other units of Rostec, the Federal Agency for State Property Management and the authorities of Tatarstan in the person of state enterprise Svyazinvestnetfekhim are on the list of those companies that are able to buy the shares of the joint-stock company.