The Central Election Commission has counted three-fourths of votes after the presidential election in Ukraine, the showman and the current leader have gone through to the second round

A president was chosen in Ukraine on 31 March, actor Volodymyr Zelensky – a successful showman – is holding the lead. And, in political experts' opinion, this result didn't become a surprise. The main intrigue during several pre-election days was who would become the second candidate – current leader of Ukraine Petro Poroshenko with almost twice votes less than Zelensky. Former Prime Minister Yulia Tymoshenko has been third and hasn't reached the second stage scheduled for 21 April. The experts whom Realnoe Vremya surveyed think that Zelensky won in the first round mainly because of the population's dislike of the current leader.

Volodymyr Zelensky who already played a role of president in the popular series Servant of the People won almost in all regions of Ukraine – he had 30,41% of votes after counting 75,13% of ballots.

Current President and founder of Roshen confectionary Petro Poroshenko got 16,12%. Yulia Tymoshenko has 13,20% votes. The former prime minister claimed that by her campaign team's estimates she goes to the next round second with 21% of votes (while Poroshenko has 17,5%), the mass media said.

The turnout exceeded 60% (63,52% at 7 a.m.). Сampaign manager, ex-employee of the Russian president's administration Andrey Kolyadin notes that these numbers certainly indicate people's interest in political changes and that ''the country respects people'': ''A lower turnout shows that authorities don't consider the people as an actor, an environment attention should be paid to.''

As for results, in Kolyadin's opinion, it was predicted that Zelensky would reach the second round as a winner as early as several days to the election: ''The only question was 'Will Poroshenko or Timoshenko become the second participant of the second round?' When the election neared, everyone thought it would be Poroshenko. Exit polls during the election campaign showed approximately the same percentage, this is why there is no surprise''.

The results were predictable, it is what sociologists forecasted, President of Minchenko Consulting holding Yevgeny Minchenko agrees. They can be mainly explained by the anti-establishment war, he says: ''The mass vote against the current power is a world tendency, and it would be strange if Ukraine were an exception.''

Course for nationalism and relations with Russia

From the point of view of campaign manager, head of Political Expert Group Konstantin Kalachyov, the election didn't have serious violations and was competitive:

''The update request is dominating, Zelensky's result comes from here. Moreover, he has got a decent number of votes in all regions of Ukraine, especially in the southeast.''

Poroshenko has focused on a state and patriotic strategy based on the attitude to Putin and Russia, the interlocutor goes on:

''The rhetoric he used gave a result in three regions, he even was first in the west. It's clear that patriotic citizens who think that all misfortunes of Ukraine are linked with Russia and Putin voted for him.'' According to BBC Russia, he managed to outrun his rival in western regions – Lviv, Ivano-Frankivsk and Ternopil Oblast.

''When we saw a failed attempt of Petro Poroshenko to create his campaign by modelling a nationalistic identity – he claimed he was a president of one part of the country – he, in fact, got what he got but failed in the other part of the country,'' Minchenko says. ''If Poroshenko focused on joining the European Union and becoming a member of NATO in the campaign, Zelensky said about changes, that Ukraine needed to get an opportunity to hold referendums, that they vigorously have to fight corruption, what he blames Poroshenko for. As for Russia, Poroshenko was much more stricter because he used an image of patriot who raised defence capacity and protected the country from Russian aggression,'' Kalachev explains.

What's more, the expert says that Zelensky wasn't clear enough when it comes to his attitude to Russia in his programme: ''But it's two-way traffic, and the question is whether Russia is ready for a dialogue on Donbass. One should have no illusions; when Saakashvili went, everyone thought that relations with Georgia would change. But nothing changed dramatically.'' Kalachyov notes that relations with Russia concern Russians more than Ukrainians themselves: ''It seems to me that the whole programme is explained in Servant of the People series. There is a lot of populism, but also there is an expectation of serious changes, a desire of a vigorous fight against corruption, a request to update the political elite.''

The programme isn't the case, Minchenko states: ''That hatred and dislike the population feels for the current elite matters.'' Zelensky's programme has a set of common phrases, it doesn't have anything substantial, the interlocutor adds: ''But we should also understand that Ukraine is a parliamentary-presidential republic. Even if Zelensky wins, he will have to co-exist with Groysman's government (Volodymyr Groysman has been the prime minister of Ukraine since 2016) till the end of the year, and then the government is created after the parliamentary election.''

In Minchenko's opinion, the reason for Zelensky's popularity is Poroshenko and the ruling elite's unpopularity in general that is considered by the population as ''corrupted and ineffective''. He presupposes that highly likely Zelensky will win in the second round: 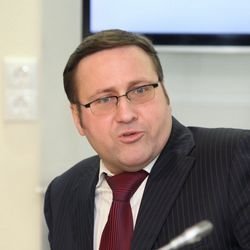 ''I can't imagine how Poroshenko can beat him, except mass falsification. But motivation for it will suddenly reduce given the margin between the candidates that's almost twice higher in favour of Zelensky.

The interlocutor reminds about attempts of mass bribery of voters ''with public money'' about which the mass media talked about: ''It's reported now on violations on the election day and during the count. But I would say now it is what usually happens in elections.''

Kolyadin is convinced that the results aren't being falsified: ''Otherwise, the actor wouldn't have a chance to win the first stage – only apparatchiks would win.'' Compared to Poroshenko, Zelensky doesn't have political experience. The comedian mentioned it in one of his speeches this way: ''I have a degree in Law, it's an advantage. But I don't have experience in politics, and it's a great advantage. Though many suppose it's a drawback.''

''As for these stories about the experience, did Putin have experience? He was a colonel. What experience did Ronald Reagan (Editor's Note: the 40 th US president, former actor), the Reykjavik mayor (Editor's Note: Jón Gnarr, mayor from 2010 to 2014) have?'' Kalachyov says and notes that not the absence of experience but the creation of an efficient team is the problem for Zelensky now.