Asgat Safarov: ''When I walk down Bauman Street, I see 10% of signs in the Tatar language''

The government of Tatarstan stated that, despite the rosy reports, the law on state languages does not work

The law on state languages is not effectively enforced in Tatarstan. Ideally, all information in the republic should be duplicated in Russian and Tatar, but so far in 100% of cases this is done only in the documents of the registry office. Officials say that they do not have enough specialists who could translate laws from Russian into Tatar. Vasil Shaikhraziev proposed to oblige to play songs in the Tatar language in parks and squares. Rafis Burganov said there is a shortage of teachers to implement the concept of trilingual schools. Asgat Safarov admitted that the figures on the use of Tatar along with Russian officials are drawn to reassure themselves. With showy excitement for the preservation of the language of Tukay, the meeting was held in the Russian language. Read more in the material of Realnoe Vremya.

Parks and squares will be forced to include play in Tatar

Deputy Prime Minister of Tatarstan Vasil Shaykhraziev proposed to expand the application of the law on languages. To publish documents in the Tatar language, duplicate street names, signs and navigation in stores is not enough for the effective implementation of the law. According to Shaykhraziev, the musical accompaniment in public places should be in the Tatar language.

''If we go to parks, skating rinks, why the law is not fulfilled in the part of musical accompaniment? People are worried. Colleagues, these are questions of the municipality, it would be great if the law works at full extent,'' said Shaykhraziev.

So far, the deputy prime ninister stated, the law on bilingualism in Tatarstan is not effectively enforced. In the public sector, in 100% of cases only birth, marriage and death certificates and answers to citizens' appeals are written in Tatar, if they are also written in the Tatar language. 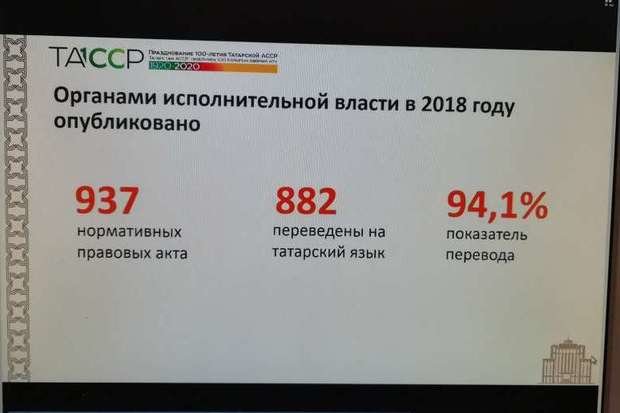 Out of 937 legal acts issued by the executive committees in 2018, 94% have been translated into Tatar. 50% out of 25,000 normative legal acts of municipalities were translated to Tatar. Officials complain about a shortage of employees who could translate from Russian into Tatar. ''There is a problem with translators in all municipalities,'' Asgat Safarov, the chief of staff of the president of Tatarstan, admitted.

On the websites of the districts over the year in Russian there were published 26,000 news, in Tatar – 25,000 news. ''This is by 20% more than in the previous year,'' Shaykhraziev said and recalled that the share of laws published in the two state languages is included in the list of indicators by which the government evaluates the work of local authorities.

88% of street signs and names are duplicated in Tatar language

However, Shaykhraziev immediately questioned the effectiveness of this method of preserving and developing the Tatar language.

''What we are doing on the Internet, in official documents, write letters — it's great, but very few see it. When we go out on the streets, and there are names, signs are only in one language — people do not see our work,'' Shaykhraziev said.

He warned that a meeting of the council takes place on 21 March and the heads of major cities will be asked to report on bringing the facades of buildings to the requirements of the law on two languages.

In most areas, all street signs have been translated. Many worked hard — if in January 2018 0% of the signs were in two languages, then by December — 100%. In outsiders — Yelabuga district, where only 65% of the plates are written in Russian and Tatar languages. Gennady Emelyanov has problems with road signs, as well as the heads of Leninogorsk and Spassky districts — 9-12% are in two languages, on average in the republic — 82%. 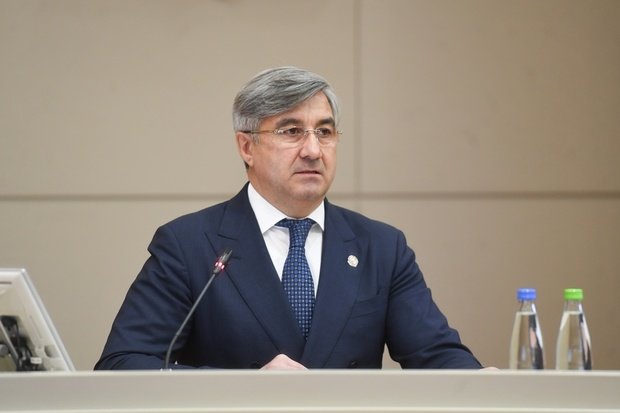 Shaykhraziev reported that the share of the population service by trade workers in two languages amounted to 94%. Photo: tatarstan.ru

''Figures are from evil, it is not a guesstimate…''

Shaykhraziev was proud to report that the share of services provided to the population by bilingual trade workers was 94%. Asgat Safarov doubted these figures.

''The provision of service of the population in trade on two state languages — how did you calculate it? Figures are from evil, I'm not saying it is guessmate,'' said Safarov and noticed that he had never seen the cashiers respond to customers in two languages.

Shaykhraziev justified that the statistics he voiced did not say that cashiers speak Tatar. ''It is networkers — OBI, Leroy, Metro clearly comply with the law, all navigation there in two state languages.''

The deputy prime minister complained about the builders of social facilities and the ministries that supervise them. ''It hurts when we break our law with budget money. This applies to all ministries. The hospital and the palace were built on budget money, and during the coordination of signs forgot that they should be translated into two languages. This applies to parks and gardens. Everything that goes on republican money, all of us have to execute within the law. Now at whose expense are we going to eliminate this drawback?''

''We have a responsibility for non-compliance with the law on bilingualism. Why did the administration not use this tool? You don't have to go far. When I walk down Bauman Street — there are 10% of signs in the Tatar language. There are heads of administrations, they are responsible for that. We draw different numbers, reassure ourselves that everything is all right. In fact, things are going very slowly, the population criticize for a reason,'' said Asgat Safarov. ''For the current year, more than 7,000 textbooks in the Tatar language were donated to educational organizations,'' Burganov said. Photo: tatarstan.ru

Minister of Education Rafis Burganov reported on the results of the programme ''Preservation, study and development of state and other languages in Tatarstan''. This year for these purposes 139 million have been spent. The main results he called the competition, total dictation, translation of cartoons in Tatar and Russian subtitles on Tatar-speaking TV programmes. 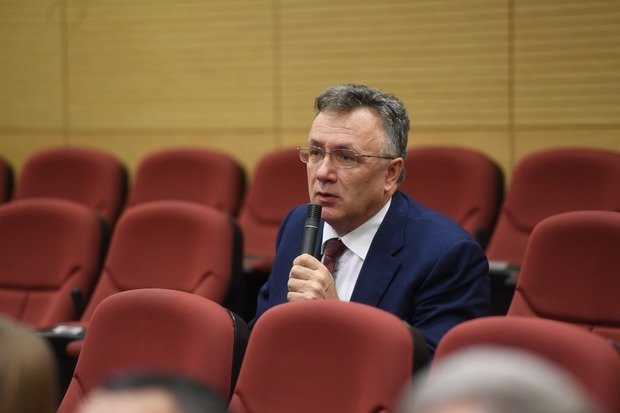 ''Was money intended for translation books?'' said Director General of TNV Chanel Ilshat Aminov, mentioning the meeting in the state council, where the issue was discussed. Photo: tatarstan.ru

Burganov reports on shortage of teachers

The rector of the Kazan Federal University reminded Burganov that according to the new concept the national schools need teachers not only with knowledge of Russian and Tatar, but also of the English language. Ilshat Gafurov asked Burganov to calculate how many such teachers the republic is going to need: ''We need to gather a team, prepare the material and technical base, and we would like to know how many specialists will be in demand each year. At least for 5 years ahead.''

It should be noted that almost during all the meeting of the council on the implementation of the law on state languages, including a session of questions, comments and suggestions, was in Russian. And only Rafis Burganov read some pieces of the report in Tatar.