Aleksey Alyoshin: ''86% of deaths in the workplace aren't a result of accidents but disorder''

Rostekhnadzor named the main cause of accidents in hazardous facilities, asked to give control over lifts back and follow the example of the FSB

Head of the Federal Environmental, Industrial and Nuclear Supervision Service, Rostekhnadzor, Aleksey Alyoshin has an expanded meeting in Kazan on 7 February where the performance of the Volga administration was analysed. There were 14 emergencies falling within Rostekhnadzor's jurisdiction in Volga Federal Okrug in 2018. The Kazan Gunpowder Factory, which has been just recently considered the most hazardous enterprise of the country, gave the leadership to petrochemical facilities – it's where most accidents took place. Alyoshin called not accidents but disorder the main as the main cause of people's death in dangerous enterprises because of low qualification of specialists and lack of discipline.

Disorder as main cause of emergencies in hazardous factories

The panel session of Rostekhnadzor began with a report of Boris Petrov, head of the Volga administration of the Federal Environmental, Industrial and Nuclear Supervision Service, about the situation in Volga Federal Okrug. In 2018, the Volga administration conducted 13,000 checks. During them, there were detected 65,000 violations, and 69 potential accidents were prevented – it's 2,5 times more than last year. Head of the federal service Aleksey Alyoshin told about the numbers in the context of Russia. 1m violations were detected across the country, of which 2,000 could have posed a threat to life and health.

14 accidents and 14 incidents took place in Volga Federal Okrug in 2018, seven of which ended with death. The statistics across Russia are 174 accidents in enterprises falling within Rostekhnadzor's jurisdiction and 176 incidents. According to him, the unsatisfactory training of specialists and lack of discipline are the main cause of emergencies.

No real steps to relocate the gunpowder factory at the moment

The petrochemical sector is the record holder of emergencies in Volga Federal Okrug. Though the Kazan Gunpowder Factory has just recently been a leader. It seems that the change of director affected, and explosions and fires in the gunpowder factory reduced.

''With your arrival, touch wood, I'm afraid to jinx…'' Rustam Minnikhanov said addressing to Aleksandr Livshits, director general of the gunpowder factory, and noted that for some reason not only accidents reduced but ''women's mood went up after you came''. How does he know that?

Aleksandr Livshits told there were detected three factors influencing safety, and they were trying to neutralise them at the moment. A low automation level and high share of manual work are the first. Staff is the second.

''We have a chemical and technological college near the factory, and the speciality High Molecular Compounds disappeared there, gunpowder specialists disappeared as a class,'' Livshits complained.

Thirdly, it's control inside the enterprise. Prevention of violations has been tightened. ''We detect many problems without making them reach critical moments.''

Aleksey Alyoshin noted the situation in the gunpowder factory had changed ''in both number of incidents and the measures that have been taken there.''

But the gunpowder factory is almost in the centre of Kazan, a dangerous thing. And Minnikhanov asked: ''Are there any real steps to relocate it?'' Livshits replied: ''No real steps at the moment.'' 140 of 502 lifts have been detected violations

The state of facilities of the social sphere that aren't considered hazardous cause Rostekhnadzor's concern. The number of violations on social sites in energy is twice higher than in all facilities of the energy surveillance service,'' said Boris Petrov and showed slides with wires that aren't in due state.

''We can expect Winter Cherry and Lame Horse to repeat, but we can take special control over social facilities,'' he complained about the federal law on Protection of Juridical Persons and Sole Proprietors in State and Municipal Control. According to him, the same thing refers to lifts.

''There is a rule not to scare small businesses, while almost all housing fund owners are small businesses, and it's closed for us. And instead of a preventive job, we wait for accidents and tragedies. The lifts that haven't been substituted or modernised don't have a state body that's responsible for safety,'' Petrov said.

140 of 502 lifts that were changed in 2018 were detected different violations, the speaker proved his proposal to give control over the lifts back to Rostekhnadzor with statistics. Now private companies are servicing them. 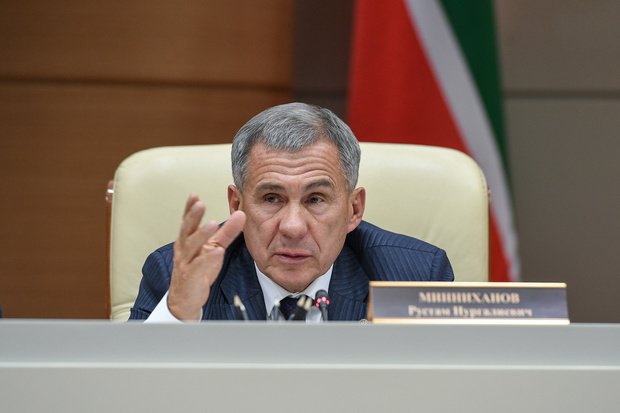 Aleksey Alyoshin paid attention to the performance of private expert organisations that sign documents on compliance of equipment and prolongation of their service life. These organisations often give reports without going to enterprises.

''Manufacturers produce equipment around the world, not some expert organisations. They themselves [expert organisations] say that 70% of evaluations are a fake. As for prolongation of service life, it's necessary to take dramatic measures, so a check will stop being a sham.''

Rustam Minnikhanov noted that key factories operated stably, while accidents in the industry take place mainly because of service and repair companies ''that cause more problems''.