Tatyana Golikova about WorldSkills in Kazan: ''We are moving even ahead of schedule''

The needs of the competition: more money from Moscow, retraining of pre-pensioners, and repair of Universiade Village in Kazan

The issues related to preparation for WorldSkills were discussed on 24 January in Kazan with participation of Deputy Prime Minister of Russia for Social Policy Tatyana Golikova. Prior to the meeting, President of Tatarstan Rustam Minnikhanov concerned himself about the health condition of WorldSkills International President Simon Bartley and presented him a fur hat. Then the countdown stele to the start of the competition was opened. At the meeting, Golikova told how they are going to facilitate the arrival and work of foreign experts, to ensure security during the event at the legislative level. Read the details in the material of Realnoe Vremya.

WorldSkills President Simon Bartley arrived in Kazan on Wednesday evening. At the meeting, he was reported on the preparation of the championship in the capital of Tatarstan. The day before, the guest of honour had a very busy day. In the morning, he visited the Cabinet of Ministers of the Republic of Tatarstan and returned with a very necessary gift — a fur hat, which President of Tatarstan Rustam Minnikhanov presented to him and Chief Executive Officer of WorldSkills International David Hoey.

Mr. Bartley told the journalists that he was reported on only positive information about the work on the threshold of WorldSkills.

''Heading the board of directors, we receive information from WorldSkills International Secretariat, which is headed by David Hoey. Also from the organizing committee, from Kazan, WorldSkills Union of Russia. All information that we receive is only positive. There are about seven months left before the start of the championship, we still have a huge amount of work to do. Some issues will appear a little later, and some problems will be resolved now by themselves. For our part, we can say that we are confident that everything is going to be great,'' said the president of WorldSkills. 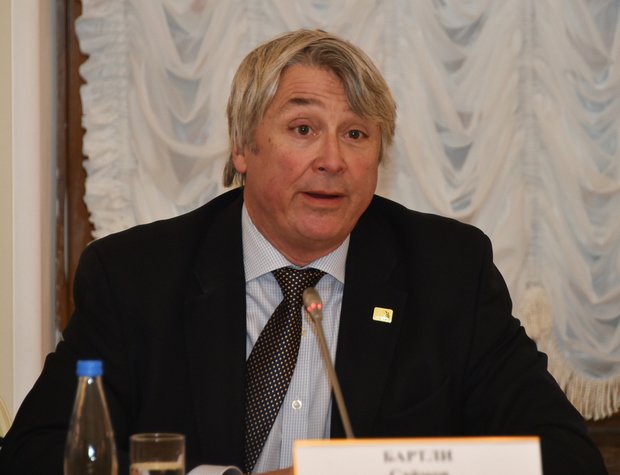 Simon Bartley: ''We are sure that everything will be fine!'' Photo: president.tatar.ru

He decided not to make forecasts on the topic of promising professions, noting that if he knew the exact answer to this question, he would be a billionaire and invested in these professions. In the meantime, not being a billionaire, he only shared his thoughts that the future belongs to human interaction with the IT component.

Fur hats for representatives of WorldSkills turned out to be very useful, because in the afternoon they planned to open the countdown stele to the start of WorldSkills Kazan 2019.

''Every time we come to Kazan, we are glad that you have two seasons — winter and summer, it is cold and hot. Because we can't change the weather, we just have to adapt to it. We are grateful to the president for such a gift. Today, at the opening of the countdown stele, we will have an opportunity to put on these warm fur hats and be warmed even more,'' said Simon Bartley with a smile.

He immediately gave the chance to journalists to imagine him in this hat in August.

''I hope that in the summer I don't use this hat. But if you see me in it in August, you will realize that all the changes in the world associated with global warming are happening now,'' joked the president of WorldSkills.

With positive results and plans for pre-pensioners

After the opening of the stele, the delegation went to the Kazan city hall — to the meeting of the organizing committee of WorldSkills Kazan 2019, which was specially attended by Deputy Chairman of the Government of the Russian Federation on Social Policy Tatyana Golikova.

Thanking the president of Tatarstan for the opportunity to hold the meeting in Kazan, she outlined the tasks and provided statistical data.

''Over the past seven years, thanks to the WorldSkills movement, we have become one step closer to solving the problem of training quality personnel. Preparation for the championship has made a significant contribution to the development of secondary vocational education in Russia,'' said Golikova. 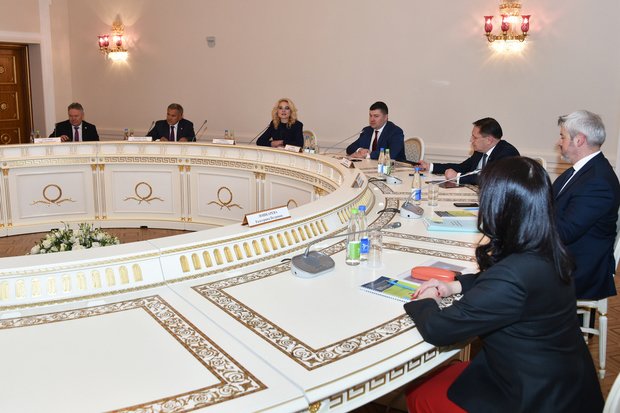 After the opening of the stele, the delegation went to the Kazan city hall — to the meeting of the organizing committee of WorldSkills Kazan 2019. Photo: president.tatar.ru

Golikova called training and retraining of people of pre-retirement age an extremely important for Russia innovation.

''Tomorrow, the Russian trilateral commission is considering the relevant document, which instructs Robert Nailevich [Urazov, CEO of WorldSkills Russia – editor's note] and his colleagues to conduct in 2019 training and retraining of our 25,000 pre-pensioners for the new and existing competencies that are currently in the armoury of WorldSkills,'' said the deputy prime minister.

Bigger than in Abu Dhabi

Moving on directly to the upcoming WorldSkills Kazan 2019, Tatyana Golikova compared expectations with the championship in Abu Dhabi in 2017. So, Kazan expects the arrival of 68 member states and 77 countries in the business programme, in the UAE there participated 59 countries. The number of contestants increased from 1,251 to almost 1,600, the number of competencies — from 51 to 56, and the audience became more from 150,000 to 250,000 people. Kazan surpassed Abu Dhabi by the area built for the WorldSkills complex. If the area of Kazan Expo is almost 270,000 square metres, in the Emirates the championship was held on the area of 108,000 square metres. In addition, for the first time in the history of WorldSkills, the separate platform Feature Skills for 15 competencies was created.

''I will not continue, this list can be very long and will tire you. Today we have had the opportunity to get acquainted with how the Republic of Tatarstan, the Russian Federation, Kazan are preparing and prepared for the 45th championship of working professions WorldSkills,'' stated the deputy chairman of the government of the Russian Federation. 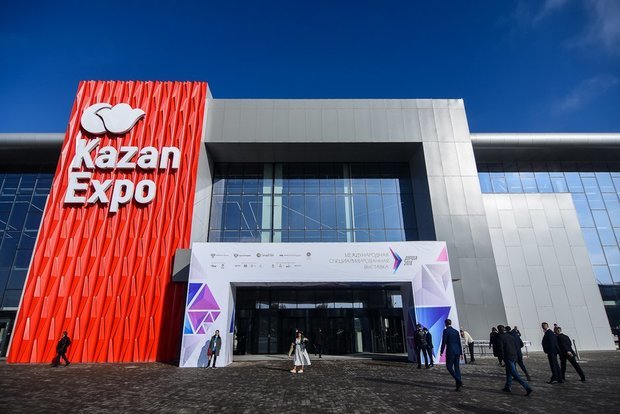 She said that they got acquainted not only with Kazan Expo, but also with the Universiade Village, where participants and experts would live. The conclusions are in favour of Tatarstan: according to Golikova, Russia is ready to host the championship, although there is still a lot of work ahead.

The previous meeting of the organizing committee was held in December, and since then the work has not stopped. A few days ago, the draft order to clarify the organizational structure of the committee was sent to the prime minister for signing, and on 23 January Tatyana Golikova approved the committee's plan for 2019. In addition, on January 11, the ministry of internal affairs agreed to create an interdepartmental operational headquarters to ensure security and law and order during the championship.

''It will include representatives of our law enforcement agencies, the Cabinet of Ministers of the Republic of Tatarstan, 'Young Professionals' Union. We expect to complete this work by 1 April 2019. Besides, colleagues from the FSB were instructed to organize the priority entry on the border of the Russian Federation for the participants and organizers of the world championship,'' Golikova told.

The preparation of a draft law to simplify the legal regulation of the work of foreign citizens in Russia on the organization and training of the Russian national team was also important. The document was considered the next day at the tripartite commission. According to the draft bill, it will be possible to attract foreigners for these purposes without a permit, and specialists will not need it for work. ''I would like to ask you to give instructions on updating financial standards for the world championship,'' the Tatarstan president carefully outlined the issue. Photo: president.tatar.ru

With budget updating for WorldSkills and Universiade Village

''The preparation for the world championship is going according to the schedule. Thank you very much, Tatyana Alekseevna, for the decisions taken to ensure the safety of the city, the object of the opening and closing ceremony, the use of the Universiade Village. We are grateful to our colleagues from the federal authorities for solving sectoral issues, as well as to the regions of Russia — for active participation in the training of volunteers and an organized group of visitors,'' after listening to the federal official, Tatarstan President Rustam Minnikhanov thanked everyone for their work.

He reminded that the international exhibition centre, in addition to all the prepared facilities, there will be installed another 50,000 square metres. In the meantime, Kazan is going to start active testing of the complex. At the same time, the head of the republic raised questions about the future of the building.

Another issue that was raised by Rustam Minnikhanov was the budget to host the championship.

''Despite the relatively short period of the competition part of the championship, the total stay of participants and delegates is about 2,5 weeks. Quantitative indicators in the field of food, attracted transport, number of rooms involved, medical care, hospitality services require the consolidation of a large number of resources for a short period of time, which does not always meet the accepted financial standards. Taking this into account, I would like to ask you to give instructions on updating financial standards for the world championship,'' the president of Tatarstan carefully outlined the issue.

Besides, according to Minnikhanov, it is necessary to approve the form of accreditation certificate by analogy with the World Cup, which will allow participants of the championship to enter and leave Russia without a visa. The relevant bill, as Tatyana Golikova noted later, will be introduced in the near future.

The president also outlined another request: ''to fix up a little'' the Universiade Village — in accordance with the high requirements of WorldSkills. The president also outlined another request: ''to fix up a little'' the Universiade Village — in accordance with the high requirements of WorldSkills. Photo: Roman Khasaev

After the meeting in the course of communication with journalists, Tatyana Golikova said that the ministry of transport of Russia is discussing with air carriers and Railways the provision of preferential tariff for participants of the World Cup. Also, the issue of day transportation by train of children is being resolved, so as not to overload the hotel, but to give them the opportunity to visit Kazan during WorldSkills.

''If to sum up the results of today's organizing committee, in principle, we are moving even ahead of schedule on implementation of activities on preparation to the 45th championship of WorldSkills and, in fact, today we have started the countdown to the event,'' concluded Tatyana Golikova. Rustam Minnikhanov added that he does not see any problems and unsolvable issues on the threshold of the championship in Kazan.