A Russian start-up wants to use satellites for advertising

A futuristic idea of broadcasting advertisements in the night sky may become real, and a Russian company that is developing the project aims to perform the first test launch already this summer. Astronomers criticise the idea, as it will increase light pollution and contribute to the volume of space debris, but acknowledge that such projects are inevitable.

A Russian start-up intends to bring billboard advertisements to low-Earth orbit using a grid of small satellites, reports Astronomy.com. The project called Orbital Display is supposed to use tiny CubeSat satellites to unfurl Mylar sails that catch and reflect sunlight creating a pixelated matrix. The project's developers, StarRocket, propose to use this technology to display brand emblems or flash urgent notifications during emergencies.

CEO of StartRocket Vladilen Sitnikov approached Skolkovo Institute of Science and Technology (Skoltech) and contracted a team of engineers to figure out technical details and develop a prototype. If the company finds funding, their first test launch can happen this summer, while the project's full execution is scheduled for 2021. Sitnikov compares his project to banner-towing aeroplanes as well as to Elon Musk's SpaceX (when the American entrepreneur launched his Tesla into space last year, many considered it to be an advertisement).

StartRocket says that its space billboard will have planned obsolescence and won't last more than a year. Moreover, it will only be viewable in evening and morning twilight, when it can catch sunlight while the observer is in darkness, explained Patrick Seitzer, an astronomy professor at the University of Michigan. ''Depending on the orbit chosen, they might be visible for a few days and then not visible for a week or more,'' he added. 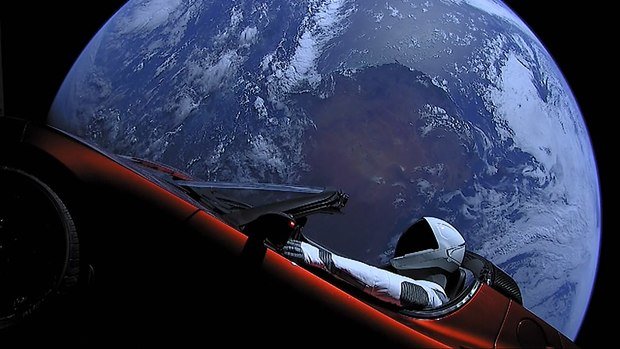 When Elon Musk launched his Tesla into space last year, many considered it to be an advertisement. Photo: SpaceX

Unsurprisingly, the idea has caused negative reactions from scientists. Seitzer, who has been studying space debris since 2000, considers that ''launching art projects like this… seems unwise'', as ''space is getting increasingly crowded''. According to the US Air Force's official public catalogue, there are over 20,000 objects with orbits, and less than 10% of those objects are active satellites.

Astronomer John Barentine, a member of the American Astronomical Society's Committee on Light Pollution, Radio Interference and Space Debris, believes that these space billboards may qualify as both light pollution and space debris and possibly even disrupt radio signals. ''It's a threat to the ability to do astronomical research from the ground,'' he said.

Nonetheless, it seems that currently there is no law that can prohibit the project's realisation. The US Federal Communications Commission recently proposed updates to mitigating orbital debris, but they haven't been yet adopted and don't address advertising. ''There's not a lot that can be done,'' said Barentine, so the implementation of a similar project may only be a matter of time.