Mintimer Shaimiev about Kazanorgsintez's anniversary: ''We have been leaders for already 60 years''

One of the leading petrochemical enterprises of Russia, Kazanorgsintez PJSC, celebrated its double anniversary — 60 years since the establishment and 55 years since the production of its first products, on 22 November in Piramida cultural and entertainment complex in Kazan. Over the years, the company has experienced the launch of new facilities, large-scale crises, managed to strengthen and create the modern production. At the celebration event, Tatarstan State Councilor Mintimer Shaimiev congratulated the factory workers on the anniversary and remembered how they had to fight for the preservation and development of Kazanorgsintez during the economic crisis in 2008. Read more in the material of Realnoe Vremya.

The representatives of the Tatarstan establishment and members of the petrochemical industry of Tatarstan congratulated the employees and managers of Kazanorgsintez PJSC on the double anniversary of the company on 22 November. The first stone in the foundation of the Kazan plant of organic synthesis was laid in 1958. Later, the plant became one of the flagships of the chemical industry of the country and the budget-forming company of the Republic of Tatarstan. The first products were produced there in the summer of 1963. At that time, only one production was launched, and the capacity of the enterprise was 45,000 tonnes a year of phenol and 27,500 tonnes a year of acetone. The company approached the anniversary date with significant achievements

The successes of Kazanorgsintez surprise with their scale. The company approached the date with significant achievements: the production of high-density polyethylene increased almost one and a half times over 10 years, from 2007 to 2017. The production of low-density polyethylene increased from more than 197,000 tonnes in 2007 to 218,000 tonnes in 2017. The capacity utilization rate increased from 92% in 2016 to 94% in 2017, and the volume index amounted to 101,7% compared to 2016.

The anniversary year began for the company without loan debts. In August 2017, Kazanorgsintez redeemed its loans to Sberbank in advance in full amount. Let us remind that the loan was issued in December 2009, and the final maturity date was in June 2018. The loan funds were used to restructure the company's debt on previously obtained loans to finance the investment programme, under which two new plants for the production of bisphenol A and polycarbonate were built, as well as a large-scale reconstruction of ethylene, HDPE and phenol-acetone production facilities was carried out.

''We have been leaders for already 60 years''

Welcoming the guests at the anniversary of the enterprise, Tatarstan State Advisor Mintimer Shaimiev reminded how Kazanorgsintez survived the consequences of the global financial crisis in 2008. The crisis hit the company at a time when huge investments were made, and the financial results were yet to come. At that time, the most important thing for the staff and management of the company was that they were not abandoned when the company was on the verge of an economic collapse. The issue was discussed at the level of the federal government. 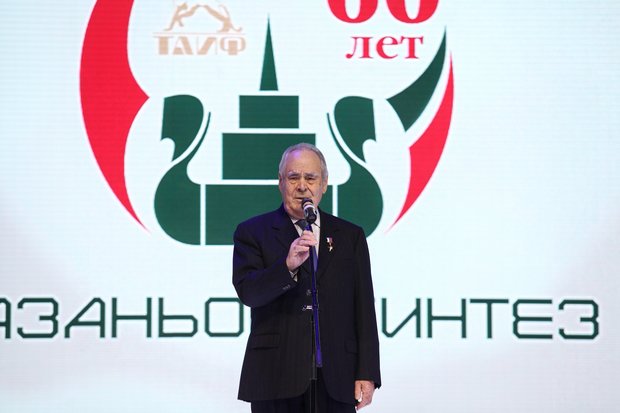 Mintimer Shaimiev congratulated the employees of Kazanorgsintez on the anniversary

''The leaders of the republic and Orgsintez allowed the crisis of 2008 to pass through themselves. We were invited to the Federation Council to discuss the situation of Orgsintez. The company's debt was 30 billion rubles. Nobody wanted to figure out where the loans came from. It is wrong to simplify such issue at such level,'' Mintimer Shaimiev told.

They all were convinced that Orgsintez would never pay off its debts at that time. At this time, many competitors of Kazanorgsintez terminated their production. However, Kazanorgsintez did not reduce the capacity, but provided the consumption of the entire chain of suppliers of raw materials. The enterprise loaded the capacities of Nizhnekamskneftekhim on ethylene, they provided consumption of straight-run gasoline at TAIF-NK, which consumed the oil extracted by Tatneft.

''Many offered to give Orgsintez to Sberbank. They believed that the bank would figure out what to do. I rose to speak, 'Has anyone wondered why Orgsintez has many loans today? The loans are to expand the production. There are loans, but they are for development, it is a look forward. Orgsintez will launch the production and pay off the defts.' No one wanted to believe that. I felt that Orgsintez was about to leave, but I said that it would happen only over my dead body. I had the right to say so, to sacrifice everything,'' Mintimer Shaimiev's speech was greeted with applause. ''Many offered to give Orgsintez to Sberbank. They believed that the bank would figure out what to do,'' Mintimer Shaimiev said

Successful development of Kazanorgsintez became possible thanks to the development strategy of TAIF PSC. Thanks to this, Kazanorgsintez has become one of the largest players in the foreign and domestic market. Last year, it produced almost half of total polyethylene output in Russia – 727,000 tonnes against 1,7 million tonnes.

''We are developing, we are trusted, our products are in demand. Tires for cars, participating in the world race, are made from our rubber. We have been the leaders for already 60 years. I like the motto of TAIF – 'Power for good'. I heartily congratulate you, keep up teh good work,'' emphasised the state adviser of the Republic of Tatarstan. After the opening speech, Mintimer Shaimiev awarded employees of Kazanorgsintez with state awards. The title of Honoured Chemist of the Russian Federation was awarded to Farit Mukharlyamov, a processing machine operator of synthesis of the 6th category of the bisphenol A plant. Rauf Shavaliev, a repairman of the 6th category of the plant of organic products and technical gases, was also awarded the title Honoured Chemist of the Republic of Tatarstan.

First Deputy Prime Minister of the Republic of Tatarstan Rustam Nigmatullin congratulated the factory workers on the anniversary. He noted the development of the company, drawing attention to the fact that many professionals dream of working for Kazanorgsintes. ''You are the basis of our economy,'' Rustam Nigmatullin said. 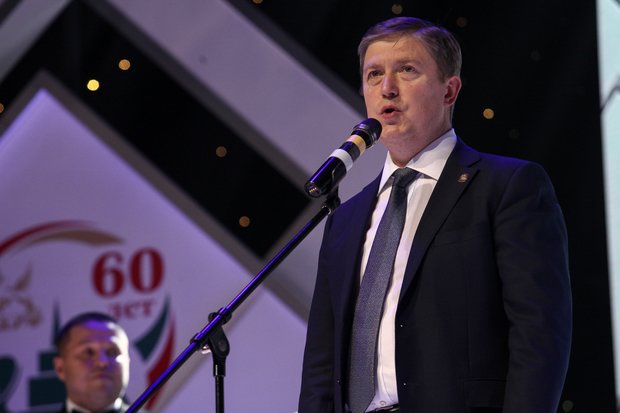 ''You are the basis of our economy,'' Rustam Nigmatullin said

Chairman of the board of directors of Kazanorgsintez PJSC Ruslan Shigabutdinov confirmed that the plant approached the anniversary date with good results, high capitalization and great prospects.

''Our difficult industrial way shows that there are no problems and tasks that our valiant order-bearing team could not solve. The enterprise did not arise by magic. Behind it, there is the daily work of many thousands of employees. I want to thank and express my gratitude to the veterans, those who laid the foundation of our company many years ago, who raised the factory buildings in the distant '50s and '60s, provided trouble-free operation, keeping the company in difficult years of perestroika. And those who are building modern factories and working for the benefit of the enterprise,'' said Ruslan Shigabutdinov. He thanked the leadership of the republic for the support of Kazanorgsintez in all endeavors, the executive directorate for everyday work, and many thousands of employees for their success. In turn, Director General of Kazanorgsintez PJSC Farid Minigulov drew attention to the fact that the year 2018 is rich in memorable dates. 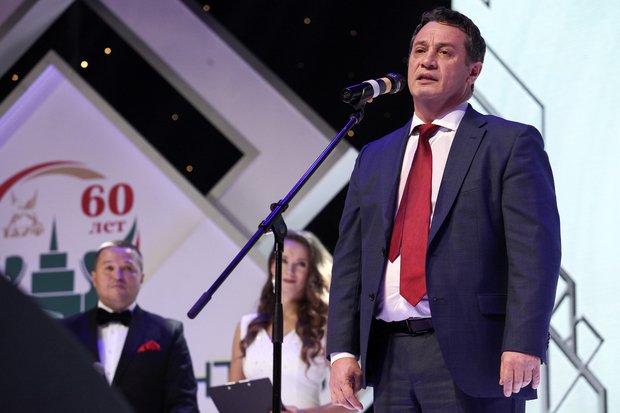 ''Fifteen years ago, TAIF Group became the main shareholder of Kazanorgsintez, 10 years ago the first and so far the only polycarbonate production in Russia was launched. I would like to thank our veterans who built the production facilities in the bare field, developed them and who follow us with excitement and help with kind words and advice. I thank the current employees of Orgsintez, those who develop technologies, build new lines,'' said Farid Minigulov. The official part of the event, solemn speeches and wishes of successful development and achievement of ambitious goals was followed by the entertainment part of the evening. Tatar pop stars and creative teams of the republic performed for the guests.