'Do you split the money with your wife?': how Minnikhanov and Komarov argued about May Decree budget

The federal centre didn’t set clear parameters for co-financing, as a result, regional investments might total more than planned 19%

A visit of Plenipotentiary Ambassador to Volga Federal District Igor Komarov to Kazan continued on 14 November. It's his first visit to Tatarstan in a new status – he was AvtoVAZ president here, this is why he couldn't avoid comparisons. In the Cabinet of Ministers, the plenipotentiary ambassador discussed May Decrees with regional authorities. A rise in cancers in Tatarstan and a lack of seats in kindergartens concerned him the most. Minnikhanov told the federal centre should set financing parameters – 89% that Moscow set turn into 50% in some programmes. Realnoe Vremya tells the details.

''There is a 4% rise in death rate from cancer in Tatarstan. It's serious, the highest growth indicator in the region''

There are 12 national projects, but Igor Komarov mentioned probably the most troubled for Tatarstan. He started with health and provided the Russian Health Ministry's numbers. According to them, the death rate from cancer suddenly grew in the republic.

''There is a 4% rise in the death rate from cancer in Tatarstan. It's serious, the highest growth indicator in the region. The ministry of health pays attention to this fact. Moreover, much money is invested in health and equipment purchase,'' Komarov said.

He noticed that the republic had 25 settlements with less than 100 people more than six kilometres far from the closest medical establishment: ''Residents of these villages should receive medical help.''

Provision of seats in kindergartens for children up to three years is another problem. According to the national project, 100% of kids should go to the nursery by 2024.

''The problem of available education for children up to three years hasn't been solved in eight out of 45 municipalities. The highest demand is in Kazan and Naberezhnye Chelny,'' Komarov said. The plenipotentiary ambassador discussed May Decrees with regional authorities

Another national project is about available dwelling. To reach the bar, which was set, Tatarstan needs to annually build 3,6m square metres. Now about 2m square metres a year are built.

''Here, it's a problem of purchasing power too. Construction paces should coincide with people's possibilities, so that a considerable share of built blocks of flats will be in demand,'' Komarov said.

He also paid attention to equity holders: ''This issue is on the agenda in Tatarstan, the number of victims exceeds 4,400 people, about 27 facilities were included to the road map. We discussed with Mr Minnikhanov that a special fund was created, attention to it is paid. But it's important that the programme run smoothly. And preventive measures to control facilities with delays and problems in construction stages are important.''

Komarov asked not to reduce the pace of rehousing from dilapidated dwelling and not to allow a sudden rise in price for solid waste collection and disposal, as citizens' money is the main source of financing, according to a new waste management system: ''We need to control tariff calculation and carry out a related explanatory job.'' The plenipotentiary ambassador set a task to attract extrabudgetary money and private and public partnership to road construction and repair.

''There have been set ambitious tasks. And the experience in solution of these problems in regions shows that we need to calculate everything and set the priorities., to include not only what we want but also choose priorities. We'd like the government of Tatarstan to calculate and evaluate the sufficiency of allocated money, the presence of money in order to see what we have money for and what for we don't by the end of the year when approving projects' data sheets,'' the plenipotentiary ambassador said. Komarov asked not to reduce the pace of rehousing from dilapidate dwelling and not to allow a sudden rise in price for collection and sold waste disposal. Photo: Oleg Tikhonov


''Everybody understands differently. We understood it as 95% to 5%''

According to Komarov, in comparison with other Volga Federal District regions, Tatarstan has a high level of financing of national projects, a small deficit of money is forecasted compared to other regions of the district ''where the percentage of the deficit is twice higher''. ''Your situation is more favourable, but we'd like the work on choosing priority projects and financing resources to be done well, professionally and responsibly,'' he finished the report.

In a return speech, Minnikhanov paid attention to the ''problems that haven't been completely understood yet''. According to him, the co-financing level is unclear.

''The co-financing level is approved by the government, it's hasn't been completely approved. Talking about the 2019 co-financing level, the ratio was 58% to 42% (Editor's Note: from the federal and regional budget). Today this number has changed as 81% to 19%. Federal ministries vary this number from 50 to 81. A clear explanation is needed because we sign an agreement with federal ministries where our co-financing is 19%,'' Minnikhanov said and reminded that the federal centre had officially said about 95%.

''Everybody understands differently. We understood it as 95% to 5%. We need to avoid a loose interpretation of these percentages,'' the Tatarstan president said.

According to Minnikhanov, the accomplishment of tasks of national projects depends on clear goals and clear financing. He paid special attention to the kindergartens Komarov had criticised.

''For instance, the kindergarten. They [the federal centre] give a sum for nurseries, and kindergartens can't be nurseries only, it's a complex. For example, we got 29 facilities, it means the ratio is 65% to 35%, [not 81% to 19%]. Safe and quality roads are another topic that hasn't been discussed with federal colleagues – there aren't final parameters. And the digital economy is the most difficult thing. How will it work? How will it look?'' Minnikhanov asked Komarov a question.

Minnikhanov reminded that 5,6tr rubles in the country were planned for national projects. And only 1,7tr are given to regions. ''Our number is 34bn, I think.'' 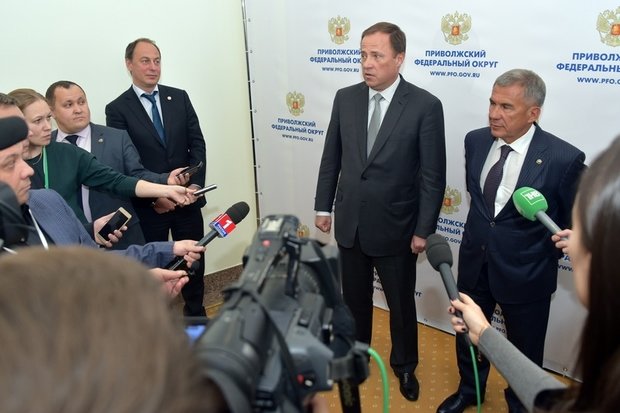 Neither Komarov nor Minnikhanov expressed so abruptly during the press scrum with journalists. Perhaps, agreement was reached

''Do you split the money with your wife?''

Neither Komarov nor Minnikhanov expressed so abruptly during the press scrum with journalists. Perhaps, an agreement was reached.

''Do you split the money with your wife? The co-financing problem will always be present. A dialogue is held. We see a big picture, we see how much money is needed for them. We have questions about the parameters of the digital economy, safe and quality roads, but it's routine questions. We have a task – to carry out these decrees, the president set the most topical tasks, so that these processes would take place in every region. We understand the responsibility and will meet the parameters,'' said Minnikhanov.

Komarov was also more positive after the talk.

''Tatarstan has taken measures, and authorities control the preparation. There was a series of problems of financing, there were questions in health, construction. But we see everything is under control. And I think there will be a high level of readiness to cover the areas by the end of the year, which will allow to increase the quality of life in the region,'' Igor Komarov said.

He also shared his impression of a visit to Naberezhnye Chelny and Yelabuga, which was one day before. He reminded that when he ''worked as a director of the big enterprise in Volga Federal District'' (Editor's Note: Komarov was a president of AvtoVAZ from 2009 to 2013), he was in Tatarstan. And having arrived now, six years later, he noted many positive things.

''I saw serious growth in Naberezhnye Chelny and Alabuga – production volumes have grown manifold, there are new residents thanks to both businesses' initiative and direct participation of Tatarstan officials. It's pleasant to come and see and surprise at the changes that are taking place in many areas,'' Komarov concluded.