The man and the arms. Izhevsk remembers legendary Kalashnikov

The most famous Soviet small arms designer was born on 10 November, 1919

The legendary designer of small arms Mikhail Kalashnikov would have turned 99 on 10 November this year. The creator of perhaps the most popular and recognizable in the world rifle worked in Izhevsk for most of his life. Together with other young designers like him, Kalashnikov worked on upgrading and improving existing weapons, controlled the start of mass production at the plant in Izhevsk. The exhibition, which has opened recently in the M.T. Kalashnikov Museum and Exhibition Small Arms Complex in the capital of Udmurtia, is dedicated to the work of the inventor and his associates. Read more in the material of Realnoe Vremya.

Mikhail Kalashnikov was born in a large family in the village of Kurya, Altai Governorate, Russian SFSR, now Altai Krai, Russia, in 1919. He showed interest in machinery from young age, first got acquainted with the arrangement of the weapon when disassembling the Browning pistol with his own hands.

In autumn 1938, he was conscripted into the Red Army. He was trained as a tank mechanic, served in the 12th Tank Division in the city of Stryi in Western Ukraine. As the researchers say, already there he demonstrated his inventive abilities — developed the inertial counter of shots from tank cannon, the device for TT pistol to improve the efficiency of shooting through the apertures in the tank turret, the counter of the tank operating time. Already in 1940, the running time meter for tank engines, invented by Kalashnikov, entered serial production.

During the Great Patriotic War, he was wounded in combat in August 1941, and already in hospital began to think about creating a new model of automatic weapon. Since then, his work with comrades, relocations, finding solutions began. The Kalashnikov rifle won the competition in 1947 and was introduced into the inventory of the army. 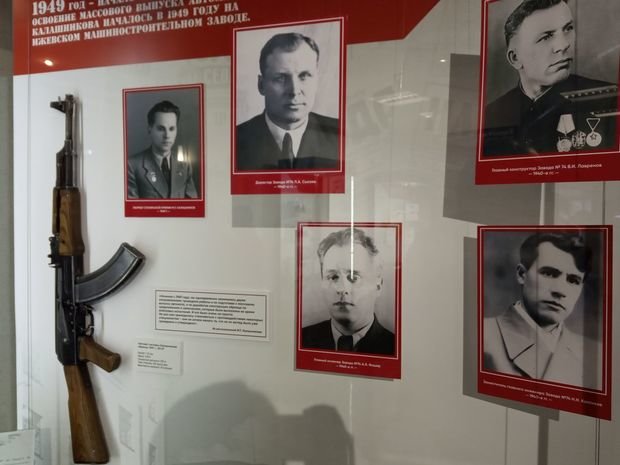 The mass production of AK-47 assault rifle with the direct participation of People's Commissar of Armaments of the USSR Dmitry Ustinov was decided to launch at the plant in Izhevsk. In 1948, Kalashnikov was sent to the capital of Udmurt ASSR for personal participation in the creation of technical documentation and the organization of production of the first pilot batch of the rifle. In May 1949, the first 1,500 assault rifles were tested and put into service.

''Young people without education managed to create a weapon that has become a legend of not only the 20th, but also 21st century. Just think about it. Kalashnikov in 1949 was only 30 years old, his friends from the group — 25. They went to work for the plant after school, during the years of working with the rifle they were studying extramurally in an industrial college, in a mechanical institute and received a diploma together with state awards,'' said Lada Mikhaylova, the head of the exposition department of the M.T. Kalashnikov Museum and Exhibition Small Arms Complex, at the opening of the exhibition 'Kalashnikov Comrades'.

Anyway, the AK-47 from the beginning was subject to constant changes. Mikhail Kalashnikov also recalled the systematic work. His quote is given in one of the display windows of the exhibition.

''Starting from 1949, we were engaged in two areas: we carried out work on the preparation for the mass production of the rifle, and on finalizing the design of the sample with due regard to the proposals and comments that were made during the military tests. It was not easy. More than once we had to face opposition of some experts — they didn't want to change the things that, in their opinion, had already been tested and approved,'' Kalashnikov wrote. 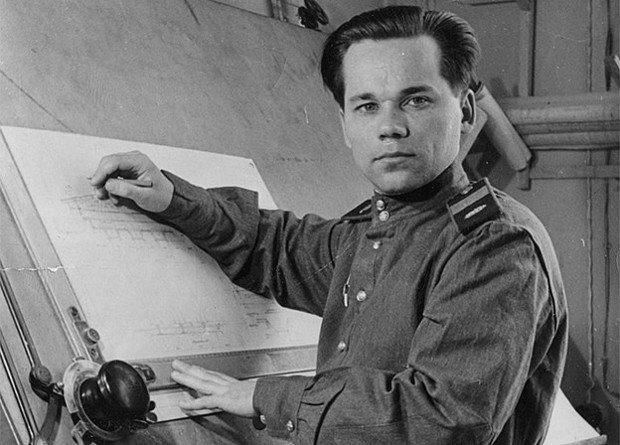 At the same time, the serial production of the rifle was quickly laucnched because of the active participation of director of the plant No. 74 Pyotr Sysoev and chief designer Vasily Lavrenov.

In 1949, Kalashnikov moved with his wife and daughter to Izhevsk for permanent residence. He lived the first years in the hotel Tsentralnaya.

''The room was small, the decor was banal, there were only two beds, a table, two chairs and a small wardrobe. In the room, we stoked a small potbelly stove: it heated the room, we cooked food on it for the child and ourselves,'' Kalashnikov wrote.

By the time, he had already been awarded the State Stalin Prize, in 1950 he was first elected to the Supreme Soviet of the USSR.

The formation of the design team under the guidance of Kalashnikov began. It included Vladimir Krupin, Vitaly Pushin and Valery Kharkov. Kalashnikov met Krupin in 1948, when establishing the production of the rifles at the Izhevsk motor plant, he became his first assistant to finalize the machine-building plant. He remembers Pushin as a well balanced person, who ''even in a stressful situation did not allow himself to raise the voice at others''.

Valery Kharkov became the successor of the glorious dynasty of Izhevsk armourers. He came to the plant during the years of the Great Patriotic War, as he had neither time nor money for study. Already working, he was studying in parallel for two years in the evacuated Bauman Moscow State Technical University in Izhevsk. 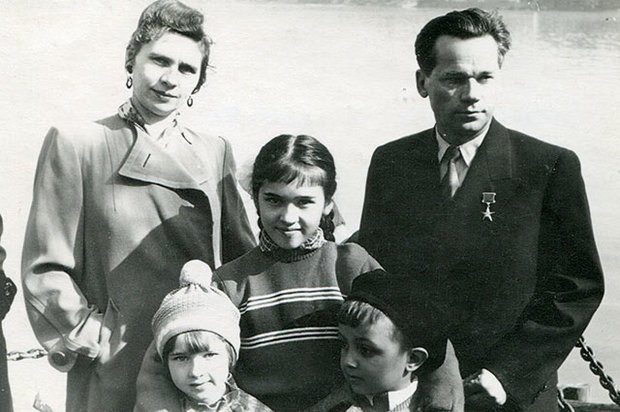 Kalashnikov with his wife and children, 1959. Photo: Elena Kalashnikova

The work to find ideas to improve the rifle was constant, even at informal gatherings.

''On a holiday day, taking the wives and children, we went to visit one of us. As a rule, our spread lasted until the first expressed working problem, after which the festive table turned into a working one… Only after midnight we went home, taking the sleeping children in our hands and wishing the next day would come sooner when we could meet again and continue the interrupted discussion,'' Kalashnikov recalled. By that time, he had been allocated a two-bedroom apartment.

Along with this, we had to form the parts literally manually. This was done by mechanics, many of whom were hereditary gunsmiths.

''In the experimental shop, Pavel Bukharin made experimental parts with his own hands. Sometimes the part had to be first sharpened, cut, milled by hand, in order to take the exact measurements after that and give to the drafters,'' says Lada Mikhaylova.

Over the years, the Kalashnikov assault rifle went through thousands of different changes, the designers, according to the museum employee, fought for every gram of weight loss. In 1959, the modernized Kalashnikov — AKM — was adopted.

Kalashnikov's group was engaged in the development of various modifications, went to military tests, and in the late 1950s began to create the general-purpose machine gun, which in 1961 won the competition. 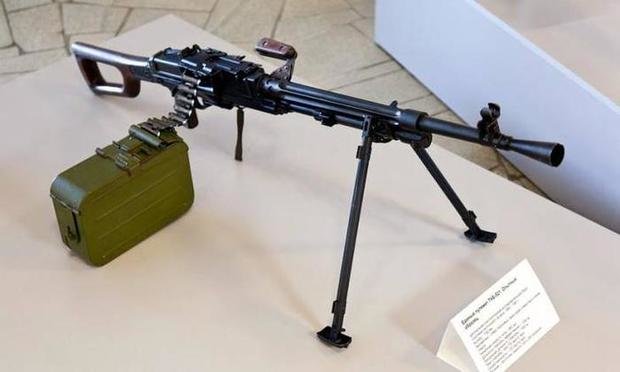 Kalashnikov's group was engaged in the development of various modifications, went to military tests, and in the late 1950s began to create the general-purpose machine gun. Photo: newsland.com

The Kalashnikov assault rifle and its modifications were created in the conditions of the beginning arms race, while its design made it possible to become the most reliable weapon, which served the growth of popularity. The researchers say that the AK occupies a share of 20% of all available small arms in the world.

Mikhail Kalashnikov continued to work for Izhmash until the end of his life. The plant was named after him in 2013. Now the concern is called Kalashnikov. It took part in various patriotic events, enjoyed great respect and love in the region. One of the fans even equipped the five-story building in Izhevsk, where Kalashnikov lived, with a lift. The M.T. Kalashnikov Museum and Exhibition Small Arms Complex was opened in Izhevsk in 2004.

Mikhail Kalashnikov died on 23 December 2013 at the age of 95, buried in the newly created Pantheon of Heroes of the Federal Military Memorial Cemetery in Moscow.

Udmurtia plans to hold a number of events dedicated to the 100th anniversary of the legendary gunsmith in 2019.