Boris Zarkov: ''The gastronomic capital is London because it is a hype city''

The founder of White Rabbit Family about who dictates gastronomic trends, what business mistakes one shouldn’t make and about his mess-up worth 40 million

Restaurateur Boris Zarkov and chef cook Vladimir Mukhin are the first in Russia who with their White Rabbit have entered the ranking of the 50 best restaurants in the world, taking this year the 15th place and setting a record for the domestic gastronomy. White Rabbit is the only Russian restaurant that has taken place in the upper half of the international rating for 4 years in a row. Today, one of the most successful domestic restaurant holdings — White Rabbit Family — includes more than two dozen projects. Boris Zarkov told about how to develop people in food field, the gastronomic festival Ikra, the sunset of the era of luxury brands and what comes to replace them in the interview with Realnoe Vremya.

''If people do not feel positive, they leave the brand and the employer''

Boris, what exactly in the history of Alice Lewis Carroll attracted you that you named your first restaurant of the group as White Rabbit?

The line ''follow the white rabbit'', that is, listen to your intuition. Sometimes you need to pause your cerebral cortex. First intuition, then analysis.

Is cerebral cortex responsible for analysis?

For consciousness, thinking and speech. The limbic system — for sense organs and emotions. The reptile part of the brain is our survival instincts. It turns out that most of our decisions, about 95 per cent, is made in the limbic part of the brain. Therefore, restaurants, and any retail in general — all that is associated with purchases, the person perceives emotionally. Memory is directly related to emotions. Things that do not cause emotions are not remembered. That is why we remember very well how we used to go fishing with dad in our childhood, how we used to go to forest with our sisters… We live in emotions. We need to create impressions in everything we do: from identica to product. This is how we create our projects. Every time we start a new project, we ask ourselves not ''what we are doing'' and not ''how'', but ''why''.

How did you answer this question when you were opening White Rabbit in 2011?

At that time, cooks were hidden, they were not shown. The positioning of the restaurants was at a party. I thought — why was this happening, because people were interested to develop in the field of food. But food was hidden. Our difference in positioning is that we were the first to promote chefs with the main goal — to develop people in food. I think the question ''why'' is very important. I had everything happening intuitively. Later I read it in Simon Sinek's Start with Why: How Great Leaders Inspire Everyone to Take Action. On the example of Apple, he tells why the corporation achieved success — Steve Jobs made the product the way he saw it. He didn't care about stereotypes. Jobs felt what the future would be like. I'm an Apple fan, by the way. Did you know that all Samsung phones, cameras and screens are several generations ahead of Apple? But I will never change my phone to a Samsung. Because for me, the Apple phone is the symbol of that I belong to the tribe of people who innovate and choose creativity.

Back to intuition. Does that mean that you can be called an intuitive entrepreneur?

Absolutely. I started reading literature useful for business two or three years ago. Something I read earlier, of course, but I couldn't find the desired information. I've made so many mistakes! I have had such failures, and they still happen. But I am grateful for these failures. This is the best lesson one can learn. We live in emotions. We need to create impressions in everything we do: from the identica to the product. This is how we create our projects. Every time we start a new project, we ask ourselves not ''what we do'' and not ''how'', but ''why''

What is the most serious mess-up you have ever had?

Well, all of them. For example, a recent failure even shook me a little. We were building a restaurant in a very famous project, I will not tell in what exactly. Here the owner of this huge building, where we rented the premises, comes and says, ''You know what, my friend, I've changed my mind that I need your restaurants here.'' But we've already spent 40 million by that time. I ask how come, we have a contract? To which he answers that a year ago I was overdue operational payment two times, and so ''you know what, dear, go out of here.'' That's how I failed and left. We live in the environment where such happens. Yes, something from the lease was returned to us.

In recruitment of employees. There should be no mistakes here, this is my personal opinion. One needs to invest the maximum of their energy in the choice of a person. You will spend time introducing a new employee to the company, integrating him or her into the culture, motivating and developing, and then six months later you will realize that this is not what you wanted. But six months will be spent in vain, today it is inconceivable. Time is the most precious thing we have.

About values. What are they in your company?

We even outlined them. This is very important because people need to understand the rules. If the values of some employees do not coincide with ours, they should understand it. And they either work on it or leave. The most important thing for us is respect and trust. Respect is when you accept someone as he or she is. In our company, tolerance is the number one value. We do not care what your religion is, what colour your skin is, what your sexual orientation is. People should work freely and feel free.

What values do you communicate to the world?

Our most important goal is the happiness of people, unconditional happiness. Of course, we have a lot of mess-ups, but if a guest comes to us and he or she is dissatisfied with something — whether he or she is right or not — we will compensate in any case.

In general, now it is the time when everyone wants to get positive, even if it is your employees. If people do not feel positive, they leave the brand and the employer.

It is also important that the company has a positive light. We have the gastronomic festival Ikra. We don't make any money on it. It's social for us. We do it because we get high. Of course, the monkey in my brain says I have to make money, but it's a social project so far. Our most important goal is the happiness of people, unconditional happiness. Of course, we have a lot of mess-ups, but if a guest comes to us and he or she is dissatisfied with something — whether he or she is right or not — we will compensate in any case

''A mistake can always be corrected''

Often traveling around the world and looking for new recipes among other things, what is the most unusual recipe you have tried?

Inspiration comes and goes, so I can't say ''the most''. They all are the most. The last thing that surprised me was in a restaurant in Ibiza. I liked a lobster salad. I love the strange combination of everything. The food is generally important to combine all the opposites: sweet and sour, soft and crunchy. And there were almost all opposites.

What recipe in your restaurant took off unexpectedly for you?

Crispy eggplant salad. The wave went all over Moscow. It is in wok they cook eggplant with tomatoes and cilantro.

How did the idea to open the mushroom restaurant Mushrooms?

In youth, people want to surprise others. Sometimes the desire to surprise leads to fails (smiling). And this is just this case. We do not promote it as a mushroom restaurant, but as an Italian one.

When did you understand that you need to change the concept?

A mistake can always be corrected. We did not alter anything, did not trumpet about it. We changed the descriptor, positioning in Instagram. Everything happens quietly and carefully. 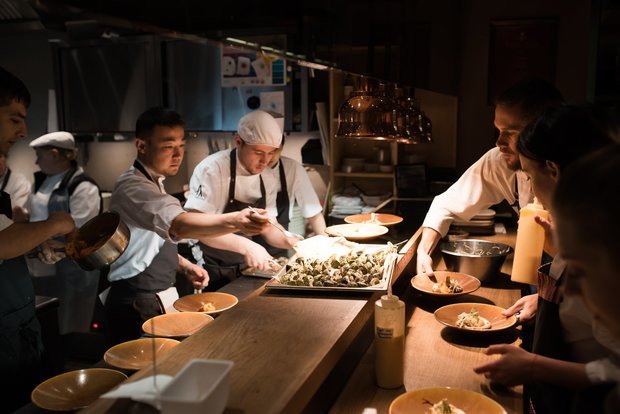 It is also important that the company has a positive light. We have the gastronomic festival Ikra. We don't make any money on it. It's social for us. We do it because we get high


''London is a hype city where trends are created''


What city do you consider the gastronomic capital of the world?

I think it is London, because it is a hype city where trends are created.

What are your plans for the medium term?

I really want to open something abroad.

In London. And we'll do it.

By Alsina Gazizova, photos from the websites of the restaurants