This year marks 190 years since the birth of Leo Tolstoy. The date is marked on an international scale, as the author remains one of the most widely read in the world. About unfading interest in the writer, his views on religion and politics — read in the interview of Realnoe Vremya with the researcher of his work, philologist Lev Sobolev.

In India, Tolstoy Museum staff was asked, ''Where do you pray to Tolstoy?''

Mr. Sobolev, is it possible to sum up all the arguments today about what Leo Tolstoy has become for our country and the whole world?

I would not undertake to speak for all Russia and to sum up. The popularity of Tolstoy worldwide is indisputable. He is one of the four most widely read authors in Europe and Asia. In India, Tolstoy Museum staff, when they brought the exhibition there, was asked, ''Where do you pray to Tolstoy?'' Because Tolstoy is not only a first-class artist, he is also the creator of Tolstoyism, the special religion. It seems to me, as any huge thing, as well as any huge artist, thinker, he is different for everybody. Of course, there can be an overlap. For someone Tolstoy is primarily War and Peace, for someone — Anna Karenina, for others — Filipok. There can be no canons here, because the world lives and continues to read and comprehend Tolstoy.

Why is there still interest in Tolstoy today? What his ideas are particularly relevant today?

I think that there are several things that can revive interest in Tolstoy today. The first is his psychological analysis, view of humans. I think that a lot of people caught themselves on that Tolstoy expressed with words those things that they felt but could not articulate. < / / > 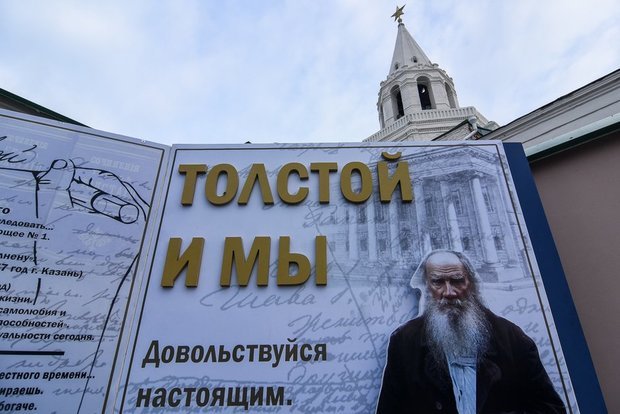 ''For someone Tolstoy is primarily War and Peace, for someone — Anna Karenina, for others — Filipok. There can be no canons here, because the world lives and continues to read and comprehend Tolstoy.'' Photo: Oleg Tikhonov

The second thing that strongly attracts is the Tolstoy religion, his idea that a believing person (he certainly was not one) does not need a mediator, does not need a Church. Of course, the churched people do not accept this, but this does not mean that they are going to dig up Tolstoy from the grave in Yasnaya Polyana and burn his bones. One way or another, he had an integral and clear view on how to live and believe. At the same time, Tolstoy was a practical man: many people said that reading Tolstoy or getting to know him changed their lives.

''Chekhov said that while Tolstoy was alive, everything was fine, he worked for everyone, but when he died, everything would go to hell''

Tolstoy biographers calls his death a harbinger of a change of the system in the country, the future revolution. Do you agree?

I can't argue with that, history doesn't know the subjunctive mood. But I can quote Chekhov, who says that while Tolstoy is alive, everything is fine, he works for everyone, but when he dies, everything will go to hell. I can quote Blok, ''It's not so scary as long as this man goes after the plow.'' All this was written during the lifetime of Tolstoy. For many, Tolstoy's death was a disaster, though expected. Not to mention that he was the first Russian writer in the world every minute of the last week of the life of whom was covered by the world press.

In recent years, social courts have been initiated against Tolstoy in Russian cities, where he is accused of being a dangerous anarchist, almost the culprit of the 1917 revolution.

I have read the articles, the authors of which I will not name, because they seem to me completely wrong. They accused Tolstoy almost of Bolshevism that he brought the October revolution closer. But the thing is that Tolstoy answers this question himself when he says that he generates the events such as 1812, that is, the invasion of Napoleon, or the French revolution. The ideas that this is because five or six people wrote books and these books were read by some people seems completely absurd to Tolstoy. In order for such events to happen, hundreds and thousands of reasons must come together. Those drunken or sober sailors and soldiers who in February 1917 went out and started riots that resulted in the February and October revolutions had not read Tolstoy. And there was no Lenin in February 1917 in Russia. ''For many, Tolstoy's death was a disaster, though expected. Not to mention that he was the first Russian writer in the world every minute of the last week of the life of whom was covered by the world press.'' Photo: Oleg Tikhonov

But Tolstoy's influence on the intelligentsia was quite strong.

His influence was not revolutionary. He used to say that we should start with ourselves, that we should change ourselves, not the world around. He has the story Divine and Human, where he writes about a genuinely mistaken and regrettable revolutionary. Those who hang him are worse than him. But he, willing to kill a minister or governor, is a poor and mistaken person.

I must say, in the last 20 years Chekhov very seriously argued with Tolstoy. He has the story New Dacha, where people come and want to live with the peasants around them in peace, but nothing works out. But Tolstoy did not idealize the relationship of intellectuals and peasants.

Can his non-possession sermon, when the idea of property permeates all spheres of life, be heard today in Russia?

Someone hears, and someone does not. I am generally afraid of generalizations such as that the whole country is based on the idea of property. You see, it's one thing when a mother thinks about how to feed her sick son, and another thing when a person thinks about how to buy another island. Tolstoy was a principled opponent of land ownership. As for the rest, none of those who came to him, wrote, asked him how to live, he did not say, ''Give all your possessions to people and follow me.'' This was said by Christ, and Tolstoy did not need to repeat it.

How has the teaching of Tolstoy at school changed from Soviet times to the present day?

On the one hand, the external conditions have changed. It is not necessary to study the Lenin's article Tolstoy as the Mirror of the Russian Revolution, although I believe that as a sociological and journalistic article it deserves comprehension and reading. But it's not necessarily to agree, whereas in Soviet times it had to be known by heart, step to the right or left was not allowed, everything had to be determined in the light of Lenin's assessments. Nevertheless, there were some exceptions earlier as well: forty years ago, two of my students went to Tula on the 150th anniversary of Tolstoy, made a report about Tolstoy and Vasil Bykov, about military literature, won a prize.

As for my presentation of Tolstoy at school, my principle is following: first Tolstoy, then Dostoyevsky. First antidote, then poison.

What does it mean? As a teacher, what can you say about the Tolstoy idea of the school he tried to create in Yasnaya Polyana?

I am very interested in this topic. Tolstoy built lessons like this: he answered questions and did not tell what he was not asked. I think that's a great point. It is clear that there is a programme, topics. But I think that real learning begins when children ask questions, when they realize that they do not understand something, and try to ask. And this idea is particularly relevant today, when amid the current state of the Internet and technology in many schools the teacher is not needed at all.

The most important thing in the contact of Tolstoy with children – it is to encourage them to inquisitive thoughts. Certainly, it is the Rousseau's theory of freedom-based education, the idea that our ideal is at the back, not at the front. This dispute between the German and French schools is still ongoing: what is the child — a clean board or a natural harmony that should be preserved? For Tolstoy, the second view, the Rousseau's position, was indisputable, he followed it as best he could. Boris Mikhailovich Eichenbaum in his very witty works about Tolstoy proved that Tolstoy's pedagogical pamphlets ''Who learn to write from whom — us from peasant children or peasant children from us'' were caused, first of all, by Tolstoy's position, his dispute with modern literature. Although we cannot create a school like in Yasnaya Polyana. What is more – it did not live more than a year under Tolstoy, these ideas are convincing and important.

In the memories of the life in Yasnaya Polyana during Tolstoy's lifetime his children write that his father did not allow them to live meaninglessly. How do you understand this?


I think that to understand this it is not necessary to give an example of Yasnaya Polyana. When in any family, urban or rural, Russian or not, people are busy and treat the work respectfully, meaningless pastime is minimized. Tolstoy did not walk around the house and did not seek out where his sons or daughters were sitting idly. He had different relationships with children. First Lev Lvovich was unusually close to his father, then he separated with him. Maria Lvovna and Tatiana Lvovna were very close to their father, they used to go with him to arrange dining rooms, to help the hungry. Almost all of Tolstoy's children left memories, as did his wife. They sometimes slightly contradict each other. But this is also not surprising. We should be careful about these memories, because a person can sincerely remember what really had not happened at all.

By Natalia Fedorova, photos from the exhibitions ''Believe yourself!''