VAR for figure skating: Americans want to get opportunity to protest

In the wake of the World Cup — skaters also want objectivity

Hardly had figure skating got accustomed to the summer changes in the rules when they again started to talk about new ones, without which they, apparently, really cannot do. Despite fundamental changes in the system of the element ''weighing'', the referees work in competitions continues to receive criticism. This time, the role of the innovator has been taken by a coach, wards of whom have been recently unfairly judged at Skate America. Tom Zakrajsek suggested introducing video replays for judges, so on that basis they could correct scores. Despite the seeming simplicity and logic of the proposal, it has enough opponents. About what they want to change in figure skating – read in the material of Realnoe Vremya.

Last summer, there was a real revolution in figure skating. After the victory of Alina Zagitova at the Pyeongchang Olympic, the ISU (International Skating Union) functionaries decided that it was time to make changes into the system of skater performance evaluation. The changes turned out to be more radical than expected, due to which they even had to cancel the previously established world and Olympic records. Various rumours, behind-the-scenes struggle and other information repeatedly leaked to the media until the beginning of the new season. Feeling the effects of the changes, the world of figure skating quietened down, eventually accepting the innovations quite loyally.

However, it wasn't possible to avoid disagreements. However, they are no longer related to the evaluation rules themselves, but rather to their technical component. Immediately after the first Grand Prix stage of Skate America, famous coach Tom Zakrajsek proposed modifying another important aspect of figure skating. According to the expert, the judging team assessed the performance of his ward, Vincent Zhou, not objectively, and to exclude such cases in the future, he advocated the introduction of video replays in figure skating by the example of the football innovation. The US had really a serious reason to start this conversation — the judges gave Zhou ''short of rotation'' to almost all his jumps in both programmes, because of which he did not get into the top three.

''As a result, instead of earning 12.73 points, Vincent earned 6.48 points due to an underrotation call coupled with an edge alert. Finishing .63 off the podium was costly for Vincent in terms of prize money, points toward the Grand Prix Final, ranking points, etc. I would argue that not only is it important for Vincent that the ISU gets this right, it is important for every skater who devotes so much time and so much effort. And every parent who devotes the same time and so much money. As well as every coach, judge and official. It is important for our sport. The ISU should also do this to relieve some of the burden placed on the technical panels which currently use low quality video equipment and only one camera angle,'' Zakrajsek posted. 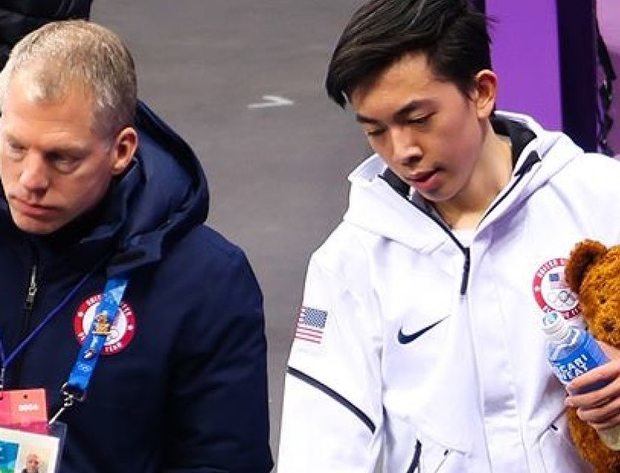 According to Zakrajsek, the referees scored the performance of his ward Vincent Zhou unobjectively. Photo: facebook.com/CoachTomZ

However, the most interesting is another proposal. He proposed to introduce viewing of video replays of controversial episodes, the right to request which the athletes dissatisfied with the assessments can exercise. He also recommended to take an example from tennis or American football, where the practice of replays has already proven to be the best.

''Just as is the case in the sports of tennis, or American football, I am also recommending that the ISU allow a coach/player to politely request a review of a questionable call immediately after the results are announced. This form of «instant replay» already exists as coaches and skaters sit in the kiss and cry and re-watch the elements back in slow motion on the jumbotron but the ISU should formalize this no matter how much time it might add to the event,'' the coach believes.

ISU: ''The system is totally transparent''

However, some do not see in the proposal of Zakrajsek anything new. Vice-President of ISU Alexander Lakernik was one of the first to speak in this regard. According to him, video replays already exist and hardly demand changes at this moment, and he agreed with the opinion on bad technical equipment of judges.

''Zakrajsek is a good coach, professional, and his emotions in this case are understandable,'' said Lakernik. ''But video replays already exist in figure skating, in full amount, the judges and the audience can see them. The system is totally transparent. The only thing I would agree with in this case is the comment on the quality of these video replays, which should be improved.''

But it is not so simple here. Obviously, Lakernik either does not quite understand the essence of the proposals, or simply does not want to stir up one of the most unpleasant aspects in his sport. Coaches and athletes really have the opportunity to review the episodes in kiss&cry room, but they have no right to protest or ask to recalculate points on the basis of replays. The rules say:

''An incorrect evaluation of an element or its level of complexity, leading to a decrease or increase in the score, belongs to the category of 'human error'.'' Alexander Lakernik: ''Video replays already exist in figure skating, in full amount, the judges and the audience can see them. The system is totally transparent. The only thing I would agree with in this case is the comment on the quality of these video replays, which should be improved.'' Photo: armnoc.am

Translated into human language, this means that the result can only be challenged if there is a mathematical error. But the judges' decision is not to be reconsidered, even if the athlete is deliberately underestimated. Many skaters faced such thing, but only the coach Zhou has decided to announce their claims.

There is problem, there will be a solution

Zakrajsek has been supported by people who are closer to skaters than functionaries. So, his initiative has been supported by honoured coach of the USSR Tatyana Tarasova. She noted that the introduction of video replays would have a beneficial effect on the refereeing, strengthening the principle of fairness.

''I am for having the opportunity to check the work of any crew because the destiny of a person depends on their opinion. Not always people who judge understand it. It would be great if technical progress could be made in this regard. As you know, trust and verify. I want it to be fair,'' Tarasova said.

Apparently, the figure skating community will divide into two camps in this matter. But, like in other sports, changes in this regard are inevitable. Despite the presence of obstacles, such as the increase in the timeframe of broadcasts, video replays must come in figure skating soon. An example here is football or tennis, where the quality of refereeing with the introduction of replays has seriously increased. ''I am for having the opportunity to check the work of any crew because the destiny of the person depends on their opinion. Not always people who judge understand it,'' Tarasova said. Photo: uznayvse.ru

However, it is hardly worth expecting sharp changes in the current season. Some hotheads are already offering to cancel several stages of the Grand Prix to introduce the innovations right now. We must understand that no one will take such a step, especially in the post-Olympic season. Besides, in the light of the summer changes in the rules, it would be a complete marasmus to make a new revolution after only six months. So, video replays will be introduced not earlier than in a year at the most. Anyway, the VAR system (as it is called in football) is much closer to figure skating than it seems.