''Off-road national project'': half of regional roads to be in order. In six years

The upcoming reincarnation of Putin's Safe and Quality Roads project into the namesake national project will allow to attract additional money to put 50% of regional roads in order, First Deputy Minister of Transport of Russia Innokenty Alafinov claimed at a plenary session of the Russian Road Agency's scientific conference in Kazan on 17 October. It's already known Tatarstan will increase related costs by 3bn rubles next year – to 30bn. However, one shouldn't delude that it's ''road renaissance'': four traffic weight control points will open at the entrance to Kazan at the end of the year, there will also be more speed cameras. Realnoe Vremya tells the details.

Putin's Safe and Quality Roads project (hereafter SQR) was the major topic of the plenary session of the Federal Road Agency's scientific conference held within Road 2018 international conference in Kazan. Two years ago, the Russian Ministry of Transport launched this priority project in 38 regional agglomerations to put regional roads that were obviously falling behind federal high-speed roads, in order. In addition, these drawbacks are becoming more notable because there are more regional than federal roads. ''On the one hand, there are federal roads about thousands of kilometres in length. On the other hand, there are regional roads over 13,000 kilometres in length, while money for repair is given inversely,'' the representative of the republic's Ministry of Transport and Road explained the road situation in Tatarstan. ''As a result, 82% of federal segments of roads don't comply with standards, while regional roads' indicator doesn't reach even 50%.''

With the launch of SQR, Moscow provided regions with an opportunity to start fighting for not completed repair of regional roads but on equal financing conditions – fifty-fifty. Tatarstan President Rustam Minnikhanov, Chairman of the Government of Udmurtia Yaroslav Semyonov and Deputy Chairman of the Government of Kaliningrad Oblast Aleksandr Rolbinov explained to officials of the Federal Ministry of Transport what the regions got in the end. It wasn't just official reports (though they couldn't avoid victorious reports) but speeches aimed to take part in the big national project with the same name.

As it's known, the Russian Transport Ministry evaluates SQR national project additionally needs 4,2tr rubles until 2024. This money is meant to be used to put a part of regional roads in order from 43% in 2018 to 50% in 2024, the ministry's materials suggest. And though the collection of offers from regions on SQR ended in July 2018, the officials enthusiastically heard out the information. Before this, the Russian president's aide, former Minister of Transport Igor Levitin pointed out again that not the quality of roads in itself but the safety of citizens and their lives were the main goals of the national project.

''I'd like to talk about one parameter – the mortality rate's 3,5-time reduction as a result of road traffic accidents compared to 2017, to the level that doesn't exceed four people per 100,000 people and aspiration to zero mortality. I think it's a very serious task we have,'' Levitin said. According to him, they have to modernise over 800km of Russian segments of first-category roads.

Third: Nizhnekamsk after Kazan and Chelny

As a host, the Tatarstan president was given the floor first. Rustam Minnikhanov clearly supported the national project and claimed its fulfilment in Tatarstan allowed to increase the number of quality roads and reduce the quantity of road traffic accidents. Federal highways, regional roads and major city streets making up principal transport flows were priority areas of the programme, the Tatarstan president said. Over 338 km of roads were repaired during the programme's application in the republic, there were taken measures to increase safety in 163 accident black spots, 74 crossings were equipped with traffic lights. Thanks to the done volume of the job, the share of roads complying with the standards totalled 81%, the number of accident black spots reduced to 73%.

Minnikhanov reminded that at the moment SQR was applied in two urban agglomerations – Kazan and Naberezhnye Chelny. ''Nizhnekamsk will join them after adopting the national project,'' the Tatarstan president assured. 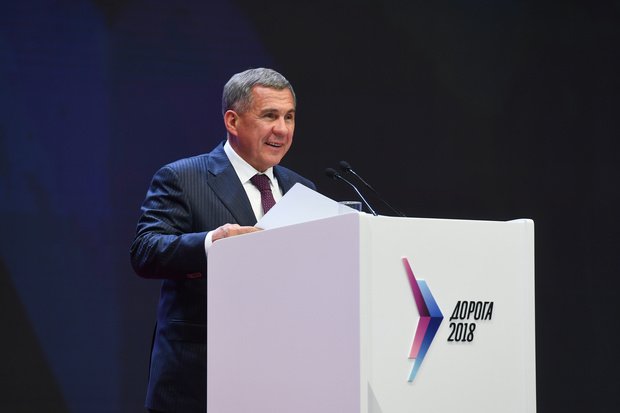 Rustam Minnikhanov clearly supported the national project and claimed its fulfilment in Tatarstan allowed to increase the magnitude of quality roads and reduce the quantity of road traffic accidents. Photo: tatarstan.ru

Director of Main Administration of Road and Transport Maintenance of Tatarstan State Treasury Administration Eduard Danilov told journalists in the forum's backstage that Tatarstan could additionally get 4bn rubles within Safe and Quality Roads national project as a federal co-financing of roadworks on its territory. ''If 27bn rubles are spent on roadworks in the republic in 2018, it will be 30bn in 2019. Tenders haven't been conducted yet.''

To exclude the dishonest during selection

''Two years ago, Safe and Quality Roads priority project began without Kaliningrad Oblast,'' Deputy Chairman of the Government of Kaliningrad Oblast Aleksandr Rolbinov surprised the audience. ''But even if other regions had noticeable supremacy in time, we kept to the schedule – we conducted a tender to choose contractors, signed contracts, carried out and completed roadworks. It took two years and cost 26bn rubles.''

But gaps in the famous Federal Law No. 44 concern Kaliningrad authorities due to which dishonest contractors get state contracts. ''Perhaps all people here will agree with me that standards of this law don't allow to shut off from dishonest contractors,'' Rolbinov presupposed. ''Yes, they can be blacklisted. But this will mean this year the work will fail. And these companies will take part in a tender again but with another name.'' The region's vice prime minister admitted a road contractor had been terrorising the region for two years in a row without having facilities. ''Not to frustrate programmes, all road structures of the region have to do all the job instead,'' Rolbinov surprised the audience again. To exclude such cases, he offered to make amendments to the Federal Law No. 44, which ''will allow to have founded requirements for contractors during the competition.'' He immediately offered to save control and surveillance of roadworks at the regional level.

''Firstly, we gave these functions to municipalities. But according to the results, we think it was a mistake. Municipalities are underqualified,'' Rolbinov is convinced.

If Kaliningrad authorities surprised with some inability, Udmurtia did with miraculous thrift. Chairman of the Government of Udmurtia Yaroslav Semyonov claimed it was possible to repair eight local roads in the city of Kambarka by economising the spending of federal money on road repair in Izhevsk. In addition, Udmurtia authorities created a four-level control system over money spending – you won't believe, even with a public commission that also accepts roads. 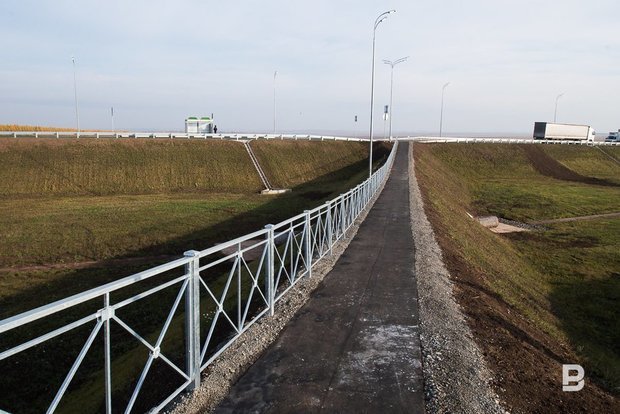 The Tatarstan transport ministry is preparing a pleasant surprise for road workers amid an inflow of big money to the sector. As Deputy Transport Minister Artyom Chukin told Realnoe Vremya, the ministry prepared a project of a decree to increase the ''lifelong contract's terms from 3 to 5 years. According to the federal decree No. 271, the client has the right to conduct tenders for repair and maintenance during the period exceeding three years. ''We just want to try it here. There is such a document at the federal level, we want to make an analogue. All contractors have both regional and federal roads. Contractors will have an assured order for 5 years. I will tell you when it's ready,'' he assured.

Stricter control over road conservation will become a reverse side of the road renaissance in Tatarstan, which means fines. According to the Federal Road Agency, about 300 traffic weight control points are to appear across Russia (today there are just 27). After the exhibition opened, the journalists asked Director of Road Traffic Safety State Budget Administration Rifkat Minnikhanov how fast weight control would come to Tatarstan. According to him, now there is one point on regional roads in Tatarstan. Four at once will open by the end of the year in places that can't be passed by. ''What will happen if a weight limit is 10 tonnes and a fully loaded 15-tonne vehicle comes? Of course, there will be a rut, which leads to road traffic accidents in winter and spring,'' Minnikhanov thinks. He also said the traffic weight control network would consist of 13 points by late 2020. In addition, the geography of speed cameras will expand. Fines will replenish the road fund, Minnikhanov noted.