Kazanorgsintez Chief Ecologist: ''Projects to reduce environmental impact are beneficial to the enterprise itself''

Kazanorgsintez, once built far outside the city, due to the growth of new residential complexes can find itself surrounded by houses. Therefore, the company has seriously increased spending on projects to reduce the impact on the environment in recent years. The modernization, conceived for the sake of environmental effect, gave in the long term the economic effect as well. At the same time, the company has begun to look on environmental issues through a broader lens: they not only modernize the production technologies, but also carry out reconstruction of own sewage treatment plants, units for disposal of liquid waste, burners for flare systems, introduce separate waste collection. Andrey Smolko, Deputy Chief Engineer — Head of Ecology Department at Kazanorgsintez PJSC, told Realnoe Vremya about what really spoils the air in Kazan, what is really harmful in emissions and how the modern chemical giant is changing for the sake of environmental purity.

Mr Smolko, in recent months the topic of ecology of Kazan has been actively discussed in the society. And in these discussions, there increasingly began to sound accusations against industrial enterprises. The productions are usually considered to be the main polluters of the environment. How true is this judgment? If we talk about Kazanorgsintez, what share of emissions accounts for it in Kazan? The ministry of ecology of Tatarstan annually publishes the Tatarstan Republic National Environmental report. It provides detailed information on both sources and volumes of pollution. According to the data published in it, the problem in Kazan is not so much with industrial enterprises as with cars. If you look at the emissions into the atmosphere, the share of motor vehicles accounts for 71,8%, and this does not include transit transport on M7 highway. The share of Kazanorgsintez PJSC is only about 9%, which is not much for the largest enterprise of our city. The total share of other industries is about 20%.

If we speak about absolute figures, what is the volume of pollutants Kazanorgsintez PJSC has formed over the year? What percentage of it goes to the air, what — in the water, and what is the solid waste?

In 2017, the emissions and discharges from Kazanorgsintez PJSC amounted to 13,58 thousand tonnes of pollutants. Also, the production and consumption waste were 21,3 thousand tonnes. More than 80% of this are low-risk construction, municipal waste and scrap metal.

How has the volume of emissions at Kazanorgsintez changed over 10 years?

Annually throughout 10 years we either reduced them or maintained at the level of the previous year, despite the fact that production volumes grow every year. That is, no matter how we ramp up the production — the impact on the environment does not increase. For example, the largest amount of emissions into the atmosphere at Kazanorgsintez was recorded in 2008. Then it amounted to 14,1 thousand tonnes. By this year, the emission of harmful substances into the atmosphere from stationary sources amounted to 10,7 thousand tonnes, that is, less by a quarter.

What is the allowable amount for the same emissions into the atmosphere?

According to the project of maximum permissible emissions into the atmosphere, Kazanorgsintez is allowed to emit 127 pollutants in the amount of 15,4 thousand tonnes per year, that is, by a third more than the real figure.

''Outside the sanitary protection zone, the MPC level is not exceeded by any indicator''

Who and how controls emissions of the enterprise?

First, Kazanorgsintez has its own environmental monitoring system. The calculation of dispersion and measurements carried out by the accredited sanitary-industrial laboratory confirms that the maximum permissible concentration of atmospheric air is already achieved at a distance of 500 to 1,000 m from the border of the industrial site. That is, outside the sanitary protection zone, which for Kazanorgsintez PJSC is approved by the chief sanitary doctor of Russia in 1,000 metres from the border of the industrial site, the level of MPC (maximum permissible concentration) is not exceeded by any indicator.

In 2017, Kazanorgsintez carried out more than 6,500 analyses of atmospheric air, more than 8,800 measurements of the air in the working area, measurements of industrial emissions were carried out 957 times, the analysis of emissions at the industrial site — more than 2,200 times. The state of atmospheric air was checked more than 3,300 times. The sanitary and industrial laboratory monitors the content of harmful substances in the air and in the air of the working area, monitors the efficiency of dust and gas collection plants and the compliance with the established standards of maximum permissible emissions into the atmosphere, controls emissions in adverse weather conditions and conducts flare selection.

''Projects to reduce environmental impact are beneficial to the company itself'' 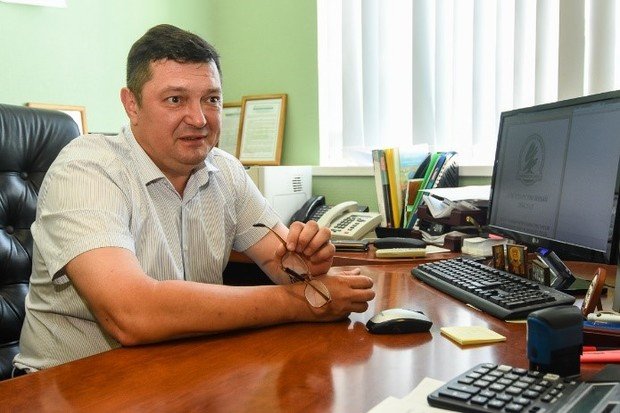 The production volumes are growing, and emissions are reducing — it does not sound logical. How could that be?

Kazanorgsintez celebrates 60 years this year. But from the Soviet plant, which was laid in 1958, there is little left. Now it is the modern complex of chemical enterprises, which has modern systems of environmental equipment. The company is equipped with 55 gas treatment plants. There are industrial filters, devices for chemical purification of gas from gaseous impurities and others.

At the same time, the production itself is regularly modernized, and new technologies allow to reduce the impact on the environment. Thus, we managed to significantly reduce emissions into the atmosphere after the modernization of the burners of flare systems. They have been updated to provide a more complete combustion and smokeless combustion of off hydrocarbon gases through organizing the air supply to the flare burners.

At the plant of Bisphenol A, Kazanorgsintez uses modern units for safe burning of the tarry residues of Bisphenol A, which belongs to 1 class of danger. The unit of the flare system of the closed type allows every year to destroy up to 3,600 tonnes of tarry residue of Bisphenol A. When burning, there is no smoke, low noise and no thermal radiation.

The project for the use of flare vented emissions as raw materials for the production of liquid carbon dioxide — the raw materials for polycarbonate — allows to annually reduce CO2 emissions into the atmosphere by 20,000 tonnes, as well as to obtain additional 227,720 Gcal of secondary steam. Thanks to this measure, Kazanorgsintez implements the Kyoto agreement on quotas for carbon dioxide emissions into the atmosphere.

Very often in the discussions of environmental issues it can be heard the phrase that the company is not ready to spend on the environment: the costs are large, but benefits, if any, are minimal. If so, then why does Kazanorgsintez need all this? If the company is allowed to emit more than 15,000 tonnes of harmful substances by all standards, so why fight emissions, reduce their volumes, spend money on it?

First, Kazanorgsintez employs the same Kazan citizens who live in our city. Naturally, we are all interested in that the impact on the environment becomes lower. Second, modernization is beneficial to the enterprise itself, if it works for the long term. If we consider the same flare systems, they burn expensive raw materials. No one is interested in just heating the oven with bundles of money. Therefore, many projects that are aimed at reducing the environmental impact in the medium and long term really lead to a high financial effect. For example, the savings due to the modernization of one flare system at the enterprise alone amounted to 21,6 million rubles per year.

447 million rubles — for the environment

Speaking of money, how much money does Kazanorgsintez expend on environmental protection measures?

Last year, the operating costs for environmental protection alone amounted to 447 million rubles, which is much higher than in previous years. What are the most large-scale measures to reduce the environmental impact the enterprise carries out?


Perhaps, one of the largest is the commissioning of the hypochlorination plant for the disinfection of the Volga River water. The new unit includes the production of low-concentration sodium hypochlorite through electrolysis method from edible salt. The obtained chemical compound has replaced chlorine used for water disinfection. The new method of disinfection of the Volga water is characterized by environmental, industrial and technological safety. In addition, it will improve the composition of drinking water. It should also be noted that the Volga water, purified by such modern technology, is already supplied to the needs of the city, providing Salavat Kupere residential complex with clean drinking water.

What measures has Kazanorgsintez carried out to reduce discharges to the river in the last 5 years?

Kazanorgsintez has fully completed the reconstruction of sludge and silt sites. The total cost amounted to 52,7 million rubles. The base and the walls have been replaced at the slurry sites, the sites have been reinforced with solid concrete base, thus preventing the seepage of contaminated sludge into the soil and groundwater. Also, the open channels have been replaced with closed pressure pipes. Kazanorgsintez has fully completed the reconstruction of sludge and silt sites

The installation of heat exchange equipment for condensate cooling at the Polycarbonate plant allowed to reduce the consumption of river water and reduce the amount of waste water by 61,3 thousand tonnes per year.

The distribution pipelines for the charge of circulating water supply systems of the enterprise with treated wastewater after the microfiltration node of the company PALL have been installed at the biological treatment facilities. The project makes it possible to completely return the waste water to the technological process, which reduces the discharge of the waste water to the Volga river by 12,000 cubic metres per day.

The introduction of the technology of alkaline effluent neutralizing with carbon dioxide at the enterprise allowed to reduce the secondary pollution of treated wastewater with sulphates by 53%.

What is the situation with the management of production and consumption waste today?

In 2017, Kazanorgsintez tested the system of dual collection of solid municipal waste. How did the system perform? As you know, the year 2017 was declared the year of ecology by the president of Russia. We worked out a model of dual collection of municipal solid waste (MSW) to reduce the amount of waste coming to landfills in the city. In 2017, Kazanorgsintez PJSC formed and placed at the solid municipal waste landfill the waste in the amount of 1,978 tonnes from the territory of the enterprise and social culture facilities. However, for the further implementation of this project, it is necessary to conduct legislative procedures. According to the requirements of 89-FZ ''On production and consumption waste'' in the Republic of Tatarstan, there must be developed a scheme of territorial planning for waste and it must be defined a Single regional operator for the processing of MSW (solid municipal waste) by January 1, 2019. The purpose of this is to stop the chaos with the landfills and pass it in one hands.

When we visited your plant, in several places we saw bins for separate waste collection. Is this also a project of the plant?

Yes, we try to make our colleagues get used to separate waste collection. Containers for selective collection of industrial waste and recyclables were installed more than 10 years ago, most workers have become accustomed to comply with selective collection. But there is a problem with where to send this sorted garbage further as in Tatarstan a regional operator for municipal waste has not been chosen yet. And we still have a lot of work to do here.