Realnoe Vremya analysed the situation with direct foreign investments (DFI) in the Volga Federal District. In general, AvtoVAZ's home region – Samara Oblast – remains the most attractive place for investors. Capitals of the USA go to Tatarstan, and Bashkiria attracted over 70% of investments from Cyprus. Meanwhile, Chuvashia and Mordovia are suffering from an outflow of foreign investors.

By early April, the total volume of long-term foreign investments in Russia exceeded $556bn, having increased by 10,2% a year. However, almost a half of this money settled in Moscow, while together with Sakhalin and Tyumen Oblasts they attracted more than 67% of all DFIs. Krasnoyarsk Krai, Yamalo-Nenets Autonomous Okrug, Saint Petersburg, Moscow, Lipetsk, Chelyabinsk and Vologda Oblasts are also in the top 10 regions with the biggest foreign investments. Scales in the Volga Federal District are more modest: the overall volume of direct foreign investments in 14 regions of the district totalled a bit more than $15bn. It's less than Moscow Oblast or Saint Petersburg attracted separately. 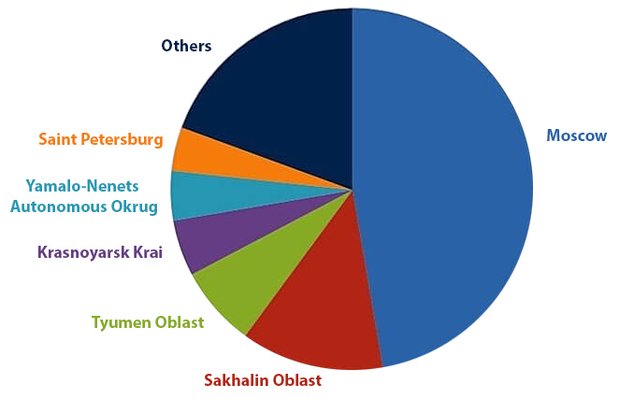 Samara Oblast – AvtoVAZ's home region – accounts for the biggest volume of investments in the district. The oblast attracted $4,3bn in total, of which $3,7bn investors invested in local companies' capital. Perm Krai is the second region in the Volga Federal District where the volume of direct foreign investments amounts to $3,5 billion (over 67% of this money takes part in the capital).

Nizhny Novgorod Oblast, Tatarstan and Bashkortostan rank third, fourth and fifth. The total investments in these regions are over $5,5 billion. At the same time, two Volga regions – Chuvashia and Mordovia – had a negative result concerning direct foreign investments in early April. This means some of the foreign investors stopped participating in local enterprises or they went bankrupt.

The republic attracted almost $1,7bn direct foreign investments in total. Tatarstan companies got the biggest part of this sum ($968m) like debt instruments, $706m of investments participate in the capital.

Manufacturing facilities occupy the key place in the sectoral structure of foreign investments in the republic, which has over 64% of all DFIs. Mineral extraction has another 17%. As for territorial structure, investments from the USA dominate here – probably due to the location of Ford Sollers in Alabuga special economic zone. Tatneft also has US shareholders in the person of The Bank of New York Mellon. Investors from the USA have invested $497m in Tatarstan in total (all in debt instruments).

In addition, Cyprus and Germany are big partners that sent $264 and $218m of direct investments respectively. In the first case, it's a standard story when Cypriot companies are nominal shareholders of regional enterprises. For instance, Osmand Holdings Limited and Sinek Investment Development hold over 12% shares of Ak Bars Bank, though the republic's Ministry of Land and Property Regulations is the end beneficiary of both companies. Tatneft Finance (Cyprus) Limited is also among affiliated persons of Tatneft. As for territorial structure, investments from the USA dominate here – probably due to the location of Ford Sollers in Alabuga special economic zone. Photo: Maksim Platonov

In case of Germany, it's particularly joint projects of KAMAZ with Daimler AG and Nizhnekamskneftekhim with Linde AG. Alabuga also has projects with the participation of German capital. Late last year, Knauf purchased Tatarstan assets of Armstrong from the USA, including the factory making ceiling plates located in the special zone.

Most DFIs in Bashkortostan ($446m out of $1,1bn) are also located in the sector of manufacturing facilities. Over 73% of all direct investments were attracted from the Republic of Cyprus. And it's explainable. A company of Viktor Kharitonov and Yegor Kulkov Augment Investments Ltd, which is the main owner of Pharmstandard-UfaVITA PJSC (the Ufa vitamin factory) is registered in Cyprus.

Kronospan Bashkortostan is part of Kronospan Holdings Ist Limited from Cyprus, which is, in turn, part of Kronospan from Austria. Bashkir factories Nicol Pack (controlled by Rybakov Family Holding Limited) and Dortransstroy (ErmanierLimited) also have links with Cyprus.

Klorendia Holdings LTD is a 100% owner of Bashkir Meat Company, while the major shareholder of Nefteavtomatika JSC is Lakasa Investments Limited. Finally, Bashkir Soda Company is part of BashChem holding, a third of whose shares is held by Modisanna Limited from Cyprus. The Netherlands, which hold $68-milion shares in the capital of local companies, is the second biggest partner of Bashkortostan. For instance, Sibir Holding B.V. from the Netherlands holds 28% of Bashneftegeofizik, while Urals Holding B.V. owns 26% of AK Ozna JSC, which services oil producers.

Firms from the British Virgin Islands invested $31m in Bashkortostan enterprise. The links with the offshore zone are also quite clear. For instance, BRITTA INVESTMENTS LTD., which is a co-owner of Mechela that's, in turn, part of Beloretsk Metallurgic Factory, is registered there.

Manufacturing plants (including mechanical engineering) became the most attractive area for investments in Samara Oblast as well as in the majority of other regions. The share of companies working in this sector is 48% of the total DFI volume.

The biggest volume of investments comes from Ukraine and Uzbekistan – $747m and $551m respectively. It's known these states are constant trade partners of Samara Oblast. For instance, in 2017, Ukraine accounted for more than 16% of the monetary volume of the region's export.

Chuvashia and Mordovia at a loss

As it was already mentioned, Chuvashia and Mordovia are suffering from an outflow of direct foreign investments. It's hard to understand why. Judging by the available data, the decline in Mordovia began in the fourth quarter last year – some of the foreign investors left one of the projects on the territory of the republic. Investors left Chuvashia in the first quarter of 2018.

Fujikura from Japan arrived in Chuvashia in 2016. There wasn't any big project with foreign investments last year, tells Anatoly Yarutkin, a public representative of the Agency for Strategic Initiatives and director of Ipso agricultural company.

Fujikura Automotive RUS Cheboksary, which made car components, ceased operations in November 2017. Pravda PFO newspaper wrote the factory lost several orders from Volkswagen factory in Kaluga. However, official data suggest that the negative result of DIFs in Chuvashia is linked with the departure of investors from Southern Europe.

South European investors also left Mordovia, however, it's also unknown which investors they are. The republic's government hasn't answered Realnoe Vremya's question yet.

It became known in March that big vodka producer Cristall-Lefortovo (nominally controlled by BKS Kholding Limited from Luxemburg) planned to close its factory in Saransk.