Ivan Mezyukho: ''It’s becoming more complicated for Ukraine to feed its own citizens with the anti-Crimean propaganda''

The information space of Ukraine has its own Crimea, which is far from the real one, notes political expert Ivan Mezyukho. In a column written for Realnoe Vremya, the expert pays attention to how the anti-Russian rhetoric is augmenting in the neighbouring country on the threshold of the presidential election, which will be next year. At the same time, our columnist thinks the population is already tired of empty promises and corruption of Kiev functionaries.

No way without Crimea

The neighbouring country doesn't calm down and continues laying its claims to Crimea. Ritual statements of Ukraine about Crimea are made by politicians of this state even if the West has almost accepted the Russian status of the peninsula. The tiredness of Ukrainian society of the topic of Crimea doesn't impede local political functionaries from generating anti-Crimean statements. What else can they do? There are no successes in the economy, the social policy in the country has fallen to zero, society is demoralised, functionaries got stuck in corruption, there is a war in the east of the country, while the level of banditry is approaching that of the tumultuous 90s.

Analysing statements of Ukrainian functionaries and political experts of Petro Poroshenko in the last months, we can come to a conclusion that the topic of Crimea will be certainly raised by the leader of the Ukrainian state and his team during the upcoming presidential and parliamentary election campaign. It seems that they can't do without Crimea. It doesn't matter it's a threadbare topic but it's tried and tested and partly effective. Analysis of the recent actions of the Ukrainian leader allows to presuppose that Mr Poroshenko is partly focusing on the active nationalistic minority during the upcoming election, which isn't subject to absenteeism and is successfully accepting inimical statements of the head of the state about Crimea, Donbass and Russia…

''The topic of Crimea will be certainly raised by the leader of the Ukrainian state and his team during the upcoming presidential and parliamentary election campaign.'' Photo: finance.liga.net

Ukraine already doesn't miss an opportunity to generate fakes about Crimea. The situation with the polluted air in the Crimean town of Armyansk became a reason for Ukrainian politicians to remind of themselves. So, in an interview with the media on Facebook, director of the organisation Mejlis of the Crimean Tatar People, which is banned in Russia, Refat Chubarov claimed that there were some military poisonous substances that were allegedly hidden in Crimean Titan factory, which, by the way, is the biggest titanium dioxide producer in Eastern Europe.

The ex-Crimean resident, of course, didn't mention the evaporation of the content of an acid accumulator (in the factory), which has considerably shallowed in the last years due to the closure of the North Crimean Channel by Kiev, caused the emission of chemical substances into the atmosphere, the media say. It seems Mr Chubarov was addicted to the anti-Crimean rhetoric and got inspired by the Skripals case that offered to send OPCW representatives to Armyansk from the high rostrum of Supreme Rada of Ukraine… This politician should urgently decide which party to choose to be elected to the new convocation of parliament. Probably this is why he acts by the principle ''more good and different publicity stunt''…

Even if representatives of the Ukrainian delegation impeded representatives of Crimea from giving a speech at last week's session of the OSCE's Office for Democratic Institutions and Human Rights in Warszawa, the Crimeans' voice anyway was heard at discussion platforms. The representatives of the Crimean mass media managed to express their vision of the situation in Crimea. The Ukrainian delegation had its own female Crimean resident, former resident of the peninsula and today's First Deputy Minister of Information Policy of Ukraine Emine Japarova. There is no necessity to explain the Ukrainian functionary's opinion about the peninsula. 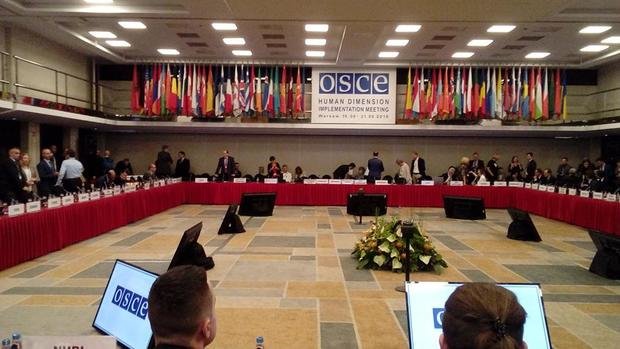 ''Even if representatives of the Ukrainian delegation impeded representatives of Crimea to give a speech at last Tuesday's session of the OSCE's Office for Democratic Institutions and Human Rights in Warszawa, the Crimeans' voice anyway was heard at discussion platforms.'' Photo: politnavigator.net

The information space of Ukraine has its own Crimea, which is far from the real one that has been successfully developing within the Russian Federation for more than four years. Ukrainian delegates had already inadequately reacted to the presence of Crimeans on OSCE discussion platforms. It was clear from the beginning of the event that the participation of Crimeans in the conference would be accompanied by the Ukrainian delegation's incorrect behaviour.

The news that the Ukrainian prosecutor general's office of the non-existing Autonomous Republic of Crimea and the Ukrainian ''Crimean'' policy identified 900 participants of the Popular Opposition of the Republic of Crimea was other proof of that Crimea would be used during the upcoming election in Ukraine. In addition, Ukraine will be promoting a new anti-Crimean resolution at the UN soon, while the above-mentioned Ministry of Information Policy of Ukraine is already working on the so-called Crimea's Information Reintegration Strategy.

The financing of virtual ''Crimean'' power agencies in Ukraine seems a corruption project of Ukrainian functionaries. The paperwork is at the height, money is used. In the absence of real victories of Ukrainian power over poverty and corruption, Kiev propagandists won't forget to say a couple of words about Russian Crimea, Donbass and Russia, in general, on the threshold of the elections. Even if Kiev is almost closing a part of the checkpoint on the state border with Russian Crimea, there is growth in the number of Ukrainian tourists going on a holiday to the peninsula compared to 2014. It's becoming more complicated for Ukraine to feed its own citizens with the anti-Crimean propaganda. The truth about Crimea will inevitably reach both Ukraine and the West.