The Russian currency, which has reached its lowest level since March 2016 this week, can return to 63-64 rubles per dollar at the end of the year, according to estimates of the economic ministry. Nonetheless, the ministry has revised its economic growth forecasts: the authorities expect lower growth and higher inflation in the near term.

The ruble has ''seriously deviated'' from fundamental value but is expected to firm to 63-64 rubles to the US dollar in December 2018, says Reuters citing Minister of Economic Development of Russia Maksim Oreshkin. ''Currently, there is a deviation from the fundamental [exchange rate] level… It can last for quite a prolonged period,'' Oreshkin said at the Eastern Economic Forum on Wednesday.

So far, the government hasn't resorted to any measures to support the currency, such as making exporters sell foreign exchange, although officials have repeatedly stated that they had a wide range of tools to be used in case of high market volatility. The ruble, which is now floating freely, was influenced by a number of factors including sanctions and capital outflows. The current slump started in early August due to the threat of extending US sanctions against Moscow. Earlier this week, the Russian currency has fallen to its weakest in two and a half years and touched 70,6 per dollar. 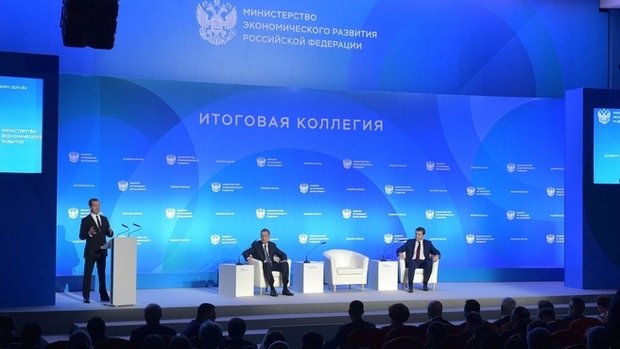 Ministry of Economic Development has lowered its economic growth forecasts for 2018 and 2019. Photo: government.ru

The Ministry of Economic Development has slightly lowered its economic growth forecasts this month amid ''mercurial markets, faster capital outflows and pessimism over the possibility of new US sanctions''. In 2018, the ministry expects that the growth will amount to 1,8% compared to its previous estimate of 1,9%. According to Oreshkin, Russia's economic growth won't exceed 1,9% in the last two quarters of 2018. ''We don't expect any big positive surprises from the third and fourth quarters (in terms of economic growth),'' said the minister, adding that it was due to the increased unpredictability and higher volatility on financial markets. The forecast for 2019 was also lowered from 1,4% to 1,3%.

Oreshkin also warned that if the exchange rate remained at current levels, annual inflation might exceed his previous forecast of 3,4%. The 2018 inflation target set by the Russian Central Bank is 4%. The Central Bank's board is supposed to meet on Friday to discuss its key interest rate. Analysts expect the regulator to keep the rate steady in order to calm markets down.