Kazan Autumn held by Tatarstan State Symphony Orchestra will open in Kazan very soon. The orchestra is drawing conclusions on the eve and sharing its plans for the new season. Realnoe Vremya tells the details.

We can say the last eight years has been as intense for the Tatarstan Symphony Orchestra as never before. Immediately after Aleksandr Sladkovsky was appointed as head conductor and art director of the orchestra, the collective entered a new phase of work, which is a far cry from the way its work looked like earlier.

Here are some demonstrative numbers and facts that characterise a correct marketing policy. 40 compositions of composers that weren't performed in Kazan have been played during these years. It's compositions written by Sofia Gubaidulina, Leonard Bernstein, Aleksey Rybnikov, Edison Denisov and others. Such conductors as Krzysztof Penderecki, Yury Bashmet, Vladimir Spivakov, Vladimir Fedoseyev and others work with the orchestra.

Top singers also have worked and work with the orchestra – Mikhail Pletnyov, Hibla Gerzmava, Dmitry Khvorostovsky, Olga Borodina, Igor Butman, Simone Kermes, Roberto Alagna, Sergey Roldugin, Nikolay Lugansky and others. The orchestra has played over 340 premieres, including 140 vocal performances, during these years. These performances include compositions of Mahler, Bruckner, Gubaidulina, Tchaikovsky, Stravinsky, Shostakovich and others. 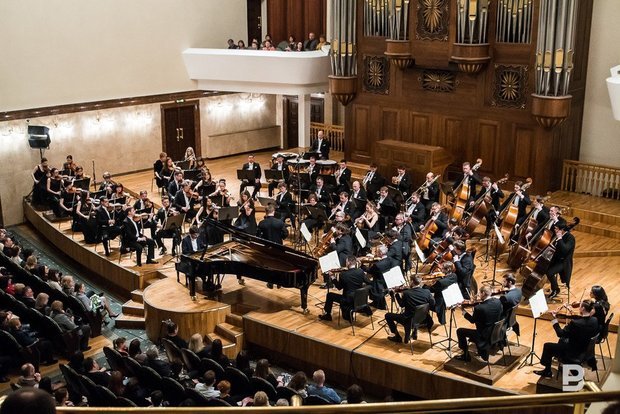 The last eight years has been as intense for the Tatarstan Symphony Orchestra as never before. Photo: Maksim Platonov

The orchestra invites the audience to its seven festivals during the year, art director of the orchestra Aleksandr Sladkovsky is their initiator and ideological mastermind. In addition, the orchestra is a constant participant of both Russian and foreign festivals. It goes on a tour to Sochi or Irkutsk as successfully as in Tokyo or in the French Riviera.

Discography is a separate topic. The recordings that are sold now worldwide have unique ones. For instance, Mahler recorded with Melodia or recordings of Dmitry Shostakovich's all symphonies and instrumental concerts, which were also recorded with Melodia and have already obtained amazed evaluations of leading world musical critics. By the way, Shostakovich's recordings are sold in 53 countries of the world now. Isn't it promotion of the Tatarstan Symphony Orchestra?

Educational charity projects are one of the areas of the symphony orchestra's work. They are four: 'From Children to Children', 'Music Classes with Orchestra', 'Orchestra's Magic Strains', 'Healing by Music'. And another project – 'From Heart to Heart' – is fulfilled together with the Tatarstan Ministry of Culture. Moreover, the Tatarstan Symphony Orchestra has its Youth Orchestra.

The official opening of the 53 rd season will be on 26 September. A very unusual concert awaits us. Firstly, it will consist of three parts. Secondly, historian and dramaturg Edvard Radzinsky is participating in the programme. He will perform a play based on his Mozart's Secrets. The author decided only he could perform it. And he had already presented a story about Mozart's secret with the Russian National Orchestra and Evgeny Svetlanov's orchestra. In that evening, the Tatarstan State Symphony Orchestra will perform fragments of the Jupiter Symphony No. 41, a requiem, concert arias and overtures for Mozart's Don Giovanni and The Abduction from the Seraglio operas. Historian and dramaturg Edvard Radzinsky is participating in the programme. He will perform a play based on his Mozart's Secrets. Photo: 360tv.ru

In general, citizens of Kazan will hear over 20 premieres. It will be compositions of Weber, Slonimsky, Shostakovich, Penderecki, Stravinsky, Mahler. The orchestra is still going to travel abroad, it will take part in festivals in Tokyo and Nantes. And it got a new invitation after a triumphal performance at an international festival in the French Riviera. This time it will be on the stage four times. The calendar year will end for the orchestra at a festival in China where the collective will perform four concerts. But the most important event is obtaining a season ticket to the Moscow Philharmonic, only top collectives have such an honour. The season ticket No. 17 includes three concerts of the Tatarstan State Symphony Orchestra under Aleksandr Sladkovsky. They will be in the P. Tchaikovsky Hall in January, February and March 2019. The orchestra will perform compositions of Bartók, Debussy, Mahler, Richard Strauss, Bruckner, Saint-Saëns. The soloists impress – it's Renaud Capuçon, Mario Brunello, Jean-Yves Thibaudet.

''We will have our own season ticket to the Moscow Philharmonic for the first time in the history of the orchestra, which is the most important event of the new season. The Moscow Philharmonic is a very serious organisation, it's hard to obtain a season ticket. I'm very thankful to Director General of the Philharmonic Aleksey Shalashov who did the honour. Of course, we performed concerts every year but with others' season tickets. Now we have our own ticket and will perform three completely different complicated programmes, including the very complicated Symphony No. 9 by Bruckner, Richard Strauss's Don Quixote, Bach's Concerto No. 2, Mahler's The Song of the Earth, Saint-Saëns's Piano Concerto No. 5. The names speak for themselves. Now the orchestra is in its best shape, it can do it. We're happy to play this music with our own season ticket. We're reaching a completely different level of the ranking on the federal scale,'' Aleksandr Sladkovsky told Realnoe Vremya. The orchestra will have is own season ticket to the Moscow Philharmonic for the first time in the history of the orchestra. Photo courtesy of Tatarstan Symphony Orchestra

According to him, the tour timetable becomes complicated and busier, the number of programmes increases, the load is big. But the head conductor is optimistic and supposes the orchestra can do a lot now. ''Of course, we're thinking now we will record with both Medici and Mezzo. I think we will go further this season,'' Aleksandr Sladkovsky commented.

Full-house concerts are another important result of Aleksandr Sladkovsky's 8 years of work in Kazan. The orchestra managed to bring its audience up, which expects its performances. By the way, the concert near the Agriculturists' Palace will traditionally be free. Arias from operas performed by Bolshoi Theatre soloist Andrey Zhilikhovsky and soloist of Helicon Opera Olga Tolkmit will be heard this evening.