Without second round: about how Turkish opposition deluded itself, and Erdoğan — won

Elections in Turkey: president’s personal tragedy, collapse of the Turkish lira and a vote for Putin in Antalya

Recep Tayyip Erdoğan and the Justice and Development Party won early elections in Turkey. The second round has been cancelled. Meanwhile, Realnoe Vremya experts note that it is becoming harder and harder for the head of the country to win — in the conditions of economic recession and political instability. What results the opposition forces have shown, what to expect after the elections and whether the president will keep his pledges — read the review of our online newspaper.

Victory of people and opposition in Saudi Arabia

Unprecedented for the state double elections have taken place in Turkey. On Sunday, the citizens simultaneously elected a president and a political party that would represent their interests in the parliament. A week earlier, a vote was held in the diplomatic missions of Turkey, located outside the country, including in Kazan. According to the preliminary results of the early elections, it became clear that the incumbent President Recep Tayyip Erdoğan remains the head of the state for the new term. He scored 52,5% of the vote.

The results of the elections of Turkish citizens from abroad are also interesting. If in Egypt 56,5% voted for Erdoğan, and for İnce – 33,2%, in Finland Pro-Kurdish candidate Demirtaş earned 43,7%, Erdoğan is the second (32,1%). Saudi Arabia celebrates the victory of İnce — 62,1% against 35,3% for Erdoğan. 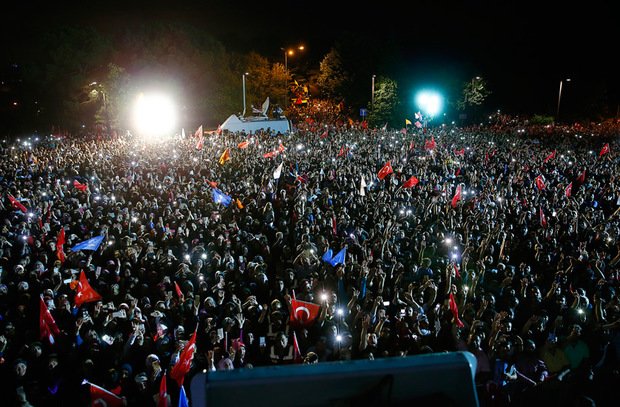 Erdoğan came to the office of the winning party and made a speech from the balcony. Photo: tccb.gov.tr


Erdoğan received congratulations from the leaders of dozens of countries. The Turkish press especially highlighted the congratulations from Vladimir Putin and the Iranian leader. Speaking of Putin, we couldn't help but mention an incident. One vote in Antalya was given for the Russian president. There was found a bulletin, on which among the candidates there was Vladimir Putin inscribed next to the remark 'Evet' (for). The bulletin was declared spoiled.

It is noteworthy that just before the announcement of the results Erdoğan was congratulated by the heads of Azerbaijan, Hungary, and Bosnia and Herzegovina. The turnout was 87%.

Can we repeat that? They couldn't

Also, 600 deputies whose powers after last year's referendum were cut were determined. The youngest member is a candidate from the Justice Party, 22-year-old Rumeysa Kadak, who was from Istanbul. Among other funny characters — serving a sentence in the case of Ergenekon, Mehmet Ali Çelebi, he became a deputy from the Republicans in the city of Izmir. A Doctor of President Süleyman Demirel became a member of the Good Party.

The leader of the parliamentary race was a coalition led by the Justice and Development Party (AKP), whose leader is actually Erdoğan. The political scientist reminds that there is still the state of emergency in Turkey, introduced in July 2016 after the failed coup attempt in Turkey. Photo: alif.tv


''Erdoğan's party could not repeat the success of the president, gaining 42%,'' says Head of the St. Petersburg Centre for Middle East Studies Gumer Isaev. ''The intrigue of the elections was whether there would be the second round. But, despite the fact that not all the votes have been counted, we can say that one round was enough for Erdoğan to win. But the situation in the parliament is much more complicated — the opposition parties that have surpassed the threshold are able to paralyze the initiatives of the ruling until recently Justice and Development Party. However, in 2015, this situation was already developing — without agreeing on a coalition, the parties went to re-elections, in which the AKP returned the majority. During the months of the parliamentary crisis in the country, the situation worsened, there were several terrorist attacks. Erdoğan's supporters can be happy, but it should be noted that he did not get the victory so easily — despite much more time on television than his opponents had, administrative resources and the ability to mobilize the electorate.''

The political scientist reminds that there is still a state of emergency in Turkey, introduced in July 2016 after the failed coup attempt in Turkey. In his opinion, there is no threat to the existing government, but the state of emergency has been extended for almost two years — under its cover, Erdoğan could deal with the opposition.

If in the 2000s Erdoğan and the AKP won largely due to the success in the economy, then in the recent years the Turkish economy is being in a difficult position. The Turkish lira in the last year beat record after record with a minus sign. By the way, the day after the elections, the national currency of Turkey significantly collapsed compared to the dollar. Erdoğan has quarreled with European partners and is in a difficult relationship with the United States — its key partner in NATO. Photo: tccb.gov.tr


''Turkey's economic growth has slowed down, capital outflow and reduction of foreign investments were the result of adventurous foreign policy,'' Isaev continues. ''The situation with 4 million Syrian refugees in Turkey remains difficult, and the Turkish policy in Syria itself has not brought the expected results at the beginning of the Syrian crisis. Erdoğan has quarreled with European partners and is in a difficult relationship with the United States — its key partner in NATO. Despite all these problems, Erdoğan once again wins, but it is becoming more and more difficult for him and his supporters to achieve the result. In the conditions of quarrel with the West and problems in the economy there remain populism and the concept of ''Besieged fortress'' — effectively, but hardly for long enough.''

Let us remind that last April the Republic of Turkey held a referendum (actually initiated by Erdoğan) on amendments to the Constitution. Realnoe Vremya wrote in detail about the results of the vote. Our online newspaper reported that residents of major cities — Istanbul, Ankara and Izmir — said ''no'' to the amendments to the basic law of the state. However, the supporters of the new Constitution managed to gain their 51,4%.

Six parties have overcome the 10%-threshold. The AKP, headed by Erdoğan and gaining the majority of votes in the elections, put forward 293 deputies to the parliament. However, this number is not enough for the sole decision-making in the parliament, believes Arif Asalyoglu, the director general of the International Institute for the Development of Scientific Cooperation (Moscow). The Nationalist Movement Party (HDP), with which the AKP has formed a coalition, will be represented by 49 deputies. In other words, each time a draft law is passed through the parliament, the AKP will be forced to seek the support of the HDP.

''This is a kind of another version of the coalition government. This situation actually indicates a decrease in the performance indicator in both the AKP and the HDP. Their interaction will continue without any problems as long as the friendship and coalition between the two parties are maintained. Of course, the HDP will seek to occupy some important positions and some ministries. The two sides will constantly bargain on this issue,'' emphasizes our interlocutor.

It is important that supported by the Kurds People's Democratic Party (HDP) — ''an important element in the political atmosphere of Turkey'' — once again managed to overcome a 10% election threshold. It will be represented by 67 deputies. The candidate of this political block managed to gain 8,3% of the vote. The Turkish political expert calls it a good result for a man who fought in the election race from prison, because he could not hold rallies or use the media.

The final official results may take a long time to be announced. The statement of opposition supporters and news related to violations add intrigue to the agenda. Asalyoglu cited examples when bags with clean ballot papers, as well as thousands of forms with marks in favour of the AKP, were seized. The police received controversial statements. The final official results may take a long time to be announced. Photo: Oleg Tikhonov


Will the president keep his election pledges?

For the editor-in-chief of Moskovsky Komsomolets newspaper in Turkey, Yashar Niyazbayev, the election results were unpredictable.

''No one knew what to expect from the elections,'' the journalist commented to the correspondent of Realnoe Vremya. ''According to the results of the polls, there should have been the second round. And there, the victory awaited Erdoğan in any case. But, as we can see, Erdoğan could win without the second round. It was a surprise, at least for me. Probably, it is a great merit of the opposition, they could convince me and other observers that they would have serious support in the first round.''

According to him, the opposition accepted the results of the elections. Even a mobile application, which was created by the ''dissenters'' (all opposition parties — Kemalists' party CHP, Pro-Kurdish HDP, Islamist Happiness Party, Good Party) and which was to present alternative results from these opposition observers at the polling stations, gave similar results. Moreover, he does not expect protests such as rallies or pickets.

If we take into account the results presented by the opposition, probably everyone accepted what they saw. Unlike the Turkish political scientist, Niyazbayev did not find any serious information about stuffing or falsifications, which could cause discontent of the population. In addition, many opposition representatives have already announced their intention to continue the struggle within democratic framework. So they accepted the results that have been presented.

''The first step, which is expected by all segments of the society and economic markets, is a removal of the state of emergency in the country,'' Asalyoglu summed up. ''Another important step is to stop the detentions, dismissals and trials that continue after the coup of 15 July 2016, affecting 450,000 people. Other important issues are economic recovery and the relations with the EU. All these are election pledges of Erdoğan and his AKP party.