Ceremonial events dedicated to Chemist's Day have taken place in Nizhnekamsk. By tradition, the official part with participation of President of the Republic of Tatarstan Rustam Minnikhanov was held in the Sports Palace Neftekhim Arena, where the guests of the event were acquainted with the exhibition-presentation of innovative products of the largest enterprises of petrochemical and oil refining industries of Tatarstan. During the official part, veterans of the production were awarded well-deserved state awards.

Nizhnekamsk is the petrochemical capital

Representatives of the petrochemical industry of the whole republic have celebrated their professional holiday for the sixth year in a row in Nizhnekamsk — the capital of petrochemistry and oil refining. The decision to hold this day on a regional scale exactly in the city on the Kama River was taken by President of Tatarstan Rustam Minnikhanov in 2013. Due to the location of the largest industrial enterprises, which form the basis of the economy not only of our republic, but also of the country, Nizhnekamsk is rightly considered to be the centre of petrochemistry and oil refining.

Before the beginning of the official part, the head of Tatarstan, Rustam Minnikhanov, visited the exhibition of petrochemical enterprises of the republic. Among the participants of the exhibition, one of the key positions was traditionally held by TAIF-NK. The company presented to the guests of the festival the results of its activities in 2017, as well as samples of the main products — gasoline, diesel fuel, kerosene, jet fuel and bitumen. ''The projects implemented by our veterans allow us to be the most competitive not only in the country, but also in the world markets,'' Rustam Minnikhanov said.

Deputy Prime Minister of the Republic of Tatarstan — Minister of Industry and Trade Albert Karimov expressed his gratitude to the veterans of the industry and labour collectives of the enterprises and noted that the industry looks to the future with confidence. Already today, the most ambitious projects are being prepared and implemented, which involve the production of modern high-tech innovative products.

People are the main value of petrochemical industry

Petrochemistry and oil refining is a multi-thousand army of highly qualified specialists. The professional holiday was attended by veterans and the best employees of the petrochemical industry, labour dynasties, Tatarstan scientists and rationalizers, as well as university students, school students and teachers — winners of the national and regional olympiads. Deputy Head of the technical department at TAIF-NK PSC Vyacheslav Kuzmin was awarded a diploma in the nomination ''The Scientist-Production Worker''. Photo: Maksim Platonov

For labour successes, Director General of Tatneftekhiminvest-Holding OJSC Rafinat Yarullin handed over to Deputy Head of the technical department at TAIF-NK PSC Vyacheslav Kuzmin a diploma and memorable statuette in the nomination ''The Scientist-Production Worker''. In the same row with the awarded there was Minaskhat Khasanshin, a process unit operator of the sixth category of the refinery of TAIF-NK PSC. For many years of fruitful work in the petrochemical and oil refining industry, the specialist was awarded the honorary title ''Honoured Chemist of the Republic of Tatarstan''. The TAIF-NK employee was awarded the badge and the identity by President of Tatarstan Rustam Minnikhanov. Minaskhat Khasanshin, a process unit operator of the sixth category of the refinery of TAIF-NK PSC, was awarded the honorary title ''Honoured Chemist of the Republic of Tatarstan''. Photo: Maksim Platonov

Minaskhat Khasanshin has been working in the petrochemical industry for already 39 years. He took an active part in start-up operations of the vacuum unit, in the development of production of primary crude oil processing, monitored the progress of commissioning during major repairs and technical re-equipment of ELOU-AVT-7 plant. Employees of the refinery note that under the strict guidance of Minaskhat Khasanshin it was possible to bring the production performance to the modern requirements of industrial safety standards, to introduce an automated process control system, as well as to improve the overall performance of the plant for raw materials.

''I am very pleased with such a distinguished title. It is a great honour for me to receive it from the president of Tatarstan. I have worked for TAIF-NK for many years and I really hope that young professionals, a mentor to whom I am today, when coming to work to our company will gain skills and experience of the older generation,'' Minaskhat Khasanshin said.

After the awarding ceremony, the republican Chemist's Day continued with a concert programme, where about five hundred children from various dance groups of the city participated. Young dancers in their performances reflected not only the whole peculiarities of our multi-ethnic people, but also the unity of representatives of the entire petrochemical industry. Besides, the guests were pleased with artists from Nizhnekamsk, Kazan and Ulyanovsk. Russian singer Valery Syutkin closed the festive programme. 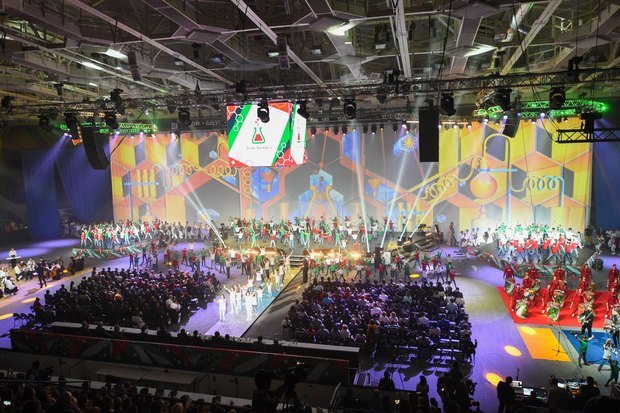