''It's not easy'': how Russia is going reduce poverty in the country

Russia has approached Vladimir Putin's new term with 22 million poor people. In some regions, 20-40% of the population live below the poverty line

Vladimir Putin officially took office as President of Russia on May 7. The country has approached his new term with the level of poverty reaching 15% (in the first quarter of 2017) and 22 million poor people. In 11 regions, more than 20% of the population live below the poverty line, and in Kalmykia, Ingushetia and Tyva — 31-42%. In the next six years, the Kremlin hopes to reduce poverty in half, but it will not be easy and will require strong comprehensive measures. Read more in the material of Realnoe Vremya.

''The only thing that matters is that the country was developing''

Late in the evening on May 6, a few hours before his fourth inauguration, President-elect Vladimir Putin invited members of the outgoing government to the Kremlin. He thanked them for their joint work and the results achieved over the past six years — the years filled with ''new challenges, extraordinary events — both in our country and in the world''.

In the past six years, the main direction of the government's work was related to the implementation of the May decrees 2012, ''Yes, there were difficulties, problems, not all indicators were achieved with high accuracy,'' Putin stated. ''It always happens when you undertake a large-scale, long-term project.'' But the only thing that matters — all these years the country was developing.''

At the same meeting, Putin called ''our'' key task for the coming years — in his words, it is ''a confident increase in real incomes of citizens''.

Recently, in public speeches, the head of the state often brought up the topics of income and living standards. On March 1, in his address to the Federal Assembly, he spoke in detail about the problem of poverty, which he had not done in his annual messages since 2011. Putin said that during his new term poverty in Russia is planned to be reduced at least twofold (and signed a corresponding decree). Putin said that during his new term poverty in Russia is planned to be reduced at least twofold. Photo: kremlin.ru

According to Bloomberg, in the next six years the Kremlin is ready to spend 10 trillion rubles — the money will go for the development of education, healthcare and infrastructure. This can become a practical content of the new ''May decree'' and, as they hope in the Kremlin, will spur economic growth and improve the quality of life (presidential spokesman Dmitry Peskov said in April that the decree on increasing spending on social services and infrastructure was really being prepared, but ''there are other figures here'').

Political expert Abbas Gallyamov believes that now the Kremlin is really concerned about socio-economic problems and will try to solve them. ''They will just have to do it because poverty is one of the key priorities of the population. However, Putin will still focus on foreign policy. In another way, he can't do it other way,'' Gallyamov says.

''The fact that the problem cannot be solved — it is also obvious. The current regime will not be able to provide the necessary rates of economic growth because it requires systemic political changes, which Putin will never decide on,'' he added.

The topic of poverty in Putin's messages to the parliament first emerged in 2002, when a quarter of Russians lived below the subsistence minimum, ''There is no reason for dizziness from success. Russia's economic problems, accumulated in previous decades — the decades of stagnation and crises — have not gone away. Poverty, though has retreated — only slightly, but continues to affect 40 million of our citizens.'' A year later, in the 2003 address, overcoming poverty was called one of the most important state tasks. This prioritization has borne fruit.

However, the number and proportion of poor people then began to rise sharply. The collapse of oil prices at the end of 2014, followed by a shock fall in the ruble, sanctions against Russia and the accumulated structural problems led to a crisis, soared inflation and a fall in real incomes, which lasted for 4 years in a row. The largest spur of poverty occurred in 2015 — the year of the most significant economic downturn, which was 2,5%. That time 3,5 million Russians joined the ranks of the poor. Next year, the number of poor people increased by another 100,000 and reached 19,6 million, or 13,4% of the country's population. The data on the poverty level for the whole 2017 has not been published yet, but in the first quarter it was 15%.

The picture of poverty has changed a little over the years. According to Rosstat, in 2016 the bulk of the poor (64%) lived in cities, more than a quarter of them — in small towns with a population of less than 50,000 people. Another 36% of the poor lived in rural areas. Almost 30% of the poor are children under the age of 16, more than 19% are young people aged 16-30.

Incomes and living standards are very unevenly distributed throughout the country. There is a nearly five-fold income gap between the poorest and the most developed regions. The top five regions with the highest per capita income in 2016 included rich in natural resources Nenets, Yamalo-Nenets, Chukotka Autonomous okrugs, Magadan Oblast, and Moscow. The most disadvantaged subjects were Tuva, Kalmykia, Ingushetia, Karachay-Cherkessia, Mordovia and Altai. If in Nenets AO income per inhabitant amounted to 69,900 rubles per month, in Tyva — only 14,100 rubles.

In 2016, there were 11 regions in Russia where the poverty rate exceeded 20%. For example, in Kalmykia it was equal to 31,2%, in Ingushetia — 32%, and in Tuva it exceeded 42%. The situation with poverty in all these subjects, as well as throughout the country, began to worsen after 2014, but before that the share of the poor was also high there. 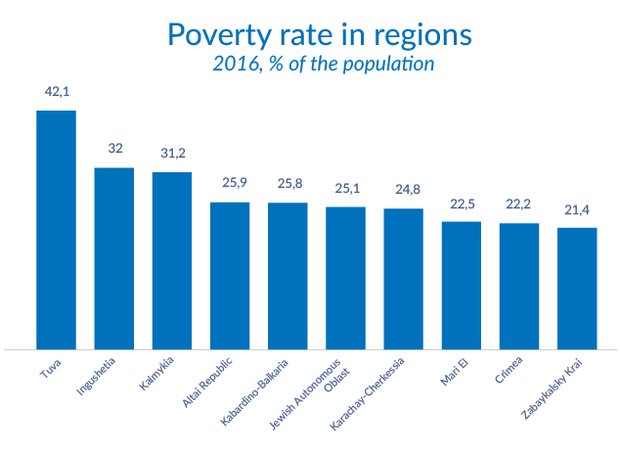 According to Vladimir Redkin, senior director of international and regional finance at Fitch Ratings, the situation with poverty in the regions is usually stable, ''So I'm afraid that the data in 2016 and now reflect the real picture.'' In some entities, poverty statistics may be somewhat overstated because they do not take informal incomes into account. But mostly, official data correspond to reality. ''If the economy in the region is not very developed, the incomes of the population are small,'' Redkin says.

A step towards reducing the number of poor people, he continues, may be a recent increase in the minimum wage. Also, the problems in disadvantaged regions can be solved through targeted social support (''for example, assistance not to all large families, but only to those that are really in need''). ''But it's not easy,'' Redkin admitted.

Elena Grishina from Institute of Social Analysis of Forecasts, Ranepa, says that the two-fold reduction of poverty until 2024, about which Putin says, ''does not look like a fantasy''. But to achieve this, we need serious comprehensive measures. Firstly, it is strengthening of targeted support. Now the amount of payments to the poor is not very high, ''If some benefits are 300 rubles, then, of course, it affects the poverty reduction insignificantly.'' The assistance should be redistributed to the most needy, and its volume should be increased.

Secondly, Grishina continues, measures will be required to stimulate the labour market, which will help to create high-tech jobs with high wages. Finally, poverty will depend on the level of pensions — given that today almost half of households have pensioners.