'Star hour' for hoteliers in Kazan

Hotels will provide guests of 2018 World Cup with rooms from 3,400 rubles a day

Chairman of Tatarstan State Committee on Tourism Sergey Ivanov reported journalists about readiness of all Kazan hotels to receive fans and guests of 2018 World Cup on May 4. He told how much it would cost to stay in hotels of different classes and what additional services hoteliers are ready to provide the visitors with during the championship. Also, he explained to the correspondent of Realnoe Vremya why for hotels in the neighbouring regions, which are also involved in reception of guests of the championship, unlike Kazan hotels, it wasn't necessary to pass strict examination on ''professional suitability''.

''All Kazan hotels, which is about 9,500 rooms, are almost 100 percent ready to receive fans and guests of the championship,'' said Sergey Ivanov to reporters. ''They have completely passed process of obligatory classification and received confirmation of their 'stars'.''

Mandatory classification of hotel business objects by accredited organizations — in simple terms, an objective assessment of the ''starness'' declared by them in advertising, as reported by the chairman of the State Committee for Tourism of the Republic of Tatarstan, will be introduced in Russia only in 2019. However, for hotels located in the regions of the 2018 World Cup matches and hosts, ''star hour'' struck ahead of schedule, and they successfully passed the quality test.

Since the monitoring of prices for hotel rooms conducted by Rospotrebnadzor in February-March revealed that 27 Tatarstan hotels that taking advantage of the demand famously overstated the prices for guest services for the period of 2018 World Cup, the correspondent of Realnoe Vremya asked how things were with this that time. Ivanov said that the cost of a room, depending on the class of the hotel, varies within 3,400-16,000 rubles a day and assured that hoteliers have already fulfilled the issued by the supervisory authority order to reduce prices: ''All Kazan hotels, which is about 9,500 rooms, are almost 100 percent ready to receive fans and guests of the championship,'' said Sergey Ivanov. Photo: Maksim Platonov

''Overpricing took place only at microenterprises working in this sphere,'' he specified. ''Large market participants comply with the Decree of the government of the Russian Federation No. 89, but small ones maybe just do not know that during the championship for each category of hotels there have been designated the 'ceiling' on the cost of accommodation. Violations were detected in mini-hotels with a maximum of five rooms. However, I assume that now there are similar cases when prices rise because of unawareness…''

Ivanov didn't inform how nine administrative cases filed in March against particularly greedy hotels ended. However, even if hoteliers were fined, they are unlikely to remain at a loss: the demand for rooms during 'peak' days, which include not only match days but also the day before the match and the day after, is very high. Today, according to the State Committee for Tourism of the Republic of Tatarstan, all rooms have been booked in Kazan hotels, and for the rest of 2018 World Cup — from 85 to 90 percent of the rooms. And this despite the fact that Kazan was only 2 weeks ago among the cities in which the official FIFA dealer on provision with hotel rooms Match Accommodation released a significant part of the unrealized reservation, which was then to go on sale.

Competition is a troublesome business

But the situation with apartment rent for the period of the championship is not clear yet. The State Committee for Tourism of the Republic of Tatarstan determined the number of residential apartments rented during 2018 World Cup only approximately.

''To date, there are 800 apartments, which are rented,'' said Ivanov. ''What kind of apartments it is and at what price they are rented, we have no data. It is also difficult to determine how many apartments owners will rent out during the championship. The owner of the property can offer an apartment for rent for a thousand rubles and for one hundred thousand, but in the second case, the question arises, who will rent it? I will be glad for citizens who will rent out apartments during the championship at such prices, but if to speak objectively, now they manage to rent out housing only at the developed market prices.'' When asked whether there are enough rooms in Kazan for all the guests, Ivanov told reporters that he ''hopes for it''. Photo: Oleg Tikhonov

However, the chairman of the State Committee on Tourism of the Republic of Tatarstan considers serious competition on the part of private owners, about which Kazan hoteliers have repeatedly told, as insignificant. There is nothing terrible in the competition, he believes, but warns that such competition for the private trader is a troublesome matter because it 'has certain duties: to ensure the quality and safety of the services, to pay taxes, to ensure the registration of guests in the migration service.''

For someone — halal, for others – transfer…

When asked whether there are enough rooms in Kazan for all the guests, Ivanov told reporters that he ''hopes for it''. In total, about 200,000 people are expected to visit Kazan during 2018 World Cup, but this figure, called by the chairman of the State Committee for Tourism, does not include those who decide to come to Kazan individually. That is, not as a fan, but on the principle ''why not visiting Kazan, plunging into the atmosphere of the holiday?'' Nevertheless, regional officials have no doubt that a decent reception will be provided to everyone, if not in Kazan itself, then in its neighbouring cities and even in neighbouring regions. The guests of the championship, as it turned out, are also going to be accommodated in hotels in Ulyanovsk, Cheboksary, Yoshkar-Ola. The local hoteliers, unlike Tatarstan, in order to earn money on the World Cup, do not necessarily have to undergo mandatory classification because their hotels are located outside the ''hosting subject''. Accordingly, accommodation in neighbouring regions will cost cheaper for fans and tourists, but the road to Kazan and to the stadium — more expensive.

But Kazan hotels, or rather, those who want to receive guests from Muslim countries, for example from Iran, in addition to the mandatory classification, are now forced to take another ''exam'' — for halalness. And this applies not only to food, as many are accustomed to think. They will have to provide special requirements both to clothes of the personnel, and even to the interior. Also, these hotels are hastily recruiting employees with knowledge of the languages the guests speak… 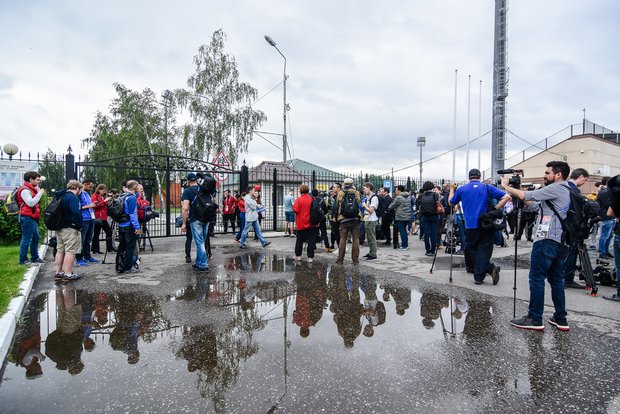 And finally another category of hotels that do not meet any special requirements, but still ''specific'': eight Kazan hotels recommended by the FIFA organizing committee for accommodation of journalists.