Kazanorgsintez PJSC, part of TAIF Group, is considered to be one of the best in terms of working conditions and social protection of its employees and their families in Tatarstan. The collective bargaining agreement of Kazanorgsintez includes 30 main types of benefits and guaranteed payments, which employees can use. At the enterprise there are projects of training and advanced training, preferential housing programmes, special conditions of medical care. More details about social projects and guarantees of Kazanorgsintez — read in the material of Realnoe Vremya.

675 Kazanorgsintez's employees provided with housing in 2017

Kazanorgsintez employs more than 8,600 people today. It is one of the largest enterprises in Tatarstan in terms of employment. Special attention is paid to working conditions and additional guarantees for its employees. The average salary at the enterprise is one of the highest in the petrochemical industry. Last year it was 1,7 times higher than the average in Tatarstan.

Housing programme is an additional incentive for employment at Kazanorgsintez. TAIF Group annually makes voluntary contributions to the implementation of social mortgage programme.

In 2014-2016, the company operated three housing programmes. The employee could use three sources of financing: a loan in the amount of 277,000 rubles, which was allocated by the company, own funds, as well as a loan from Avers Bank. Housing programme is an additional incentive for employment at Kazanorgsintez

''At the time, Avers Bank issued loans at 11%. To make the loan terms coincide with the social mortgage (under social mortgage, payments amount to 7% — editor's note), the company compensated for the difference in the amount of 4%. Today Avers Bank issues loans at 9%, respectively, we can compensate for 2%,'' said Fanur Almiev, the head of the social sphere at Kazanorgsintez PJSC.

Conditions for obtaining a loan on preferential terms are simple: the working experience of the employee should be one year. The area of housing where he lives should be no more than 18 square metres per person. As of January 1, 2018, 293 Kazanorgsintez's workers are in the waiting list for an apartment.

From 2014 to 2016, the company was issued a quota for 1,600 employees. Last year, 675 employees of Kazanorgsintez were provided with housing.

Reimbursement for part of the cost of trips to health resort centres cost the labour union 1.3m rubles

Kazanorgsintez pays greater attention to the health of the employees. Each year, the employees undergo periodic health examination. In total, more than 6,500 employees passed it in 2017. As a result of the medical examination, chronic illnesses were revealed of 390 factory workers. Another 723 employees had indication for health resort treatment. In 2018, the examination was conducted by doctors of the 7th city hospital of Kazan. They identified two staff members with possible cancer of internal organs. Fortunately, these results were not confirmed after a checkup. Also, they carry out regular and specialized inspections in certain areas. Also, each year the company carries out medical examination for cancer. In 2017, 1,400 women over the age of 40 years visited oncologist, 653 women workers were sent for additional examination. ''The year 2018 is declared year of men's health. Male workers older than 40 years will undergo cardiology and oncology examination,'' added Fanur Almiev.

It should be noted that workers of Kazanorgsintez, members of the labour union, can receive partial compensation of cost of the voucher to the health centres Bakirovo, Izhminvody, Zhemchuzhina, Vasilevsky and Livadia every three years. The amount of compensation depends on the length of service in the union and the location of the centre. The volume of payments can reach from 4,000 to 7,000 rubles. The workers taking the ticket ''Mother and child'' can reckon on partial compensation every three years. In this case, the union can pay up to 15,000 rubles, but not more than half of the cost of the vacation. In total, 29 million rubles were allocated for the maternity and childhood protection programme in 2017. 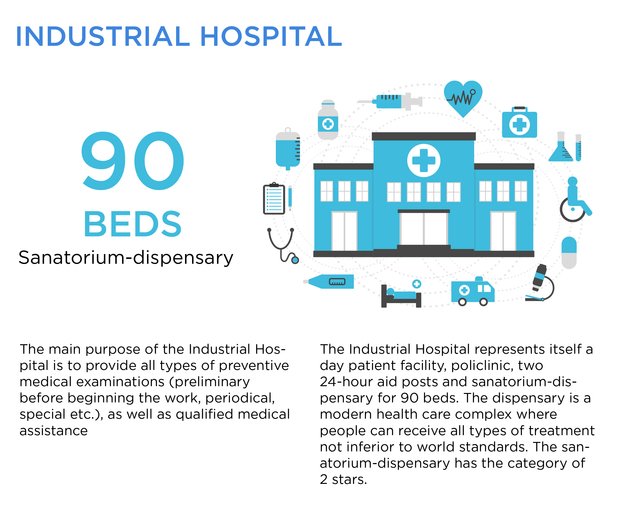 In 2017, 59 pensioners, members of the trade union organization, received preventive treatment in the sanatorium-dispensary of the medical and sanitary part of Kazanorgsintez. In total, 563 people received treatment in the sanatorium last year, including 75 employees under the contract of voluntary medical insurance. The primary trade union organization spent more than 1,3 million rubles to compensate for the cost of trips to the sanatorium of the enterprise and the health resort centres of the Russian Federation and Tatarstan.

Training in Moscow and in Kazan State Technological University, without departing from the production

The employees of Kazanorgsintez throughout the year improve their knowledge. To do this, the company has several specialized programmes. Thus, over 11 months of 2017, more than 5,300 people were trained, which is by 1,360 employees more compared to the same period of 2016. About 3,000 people were trained in their workplaces. 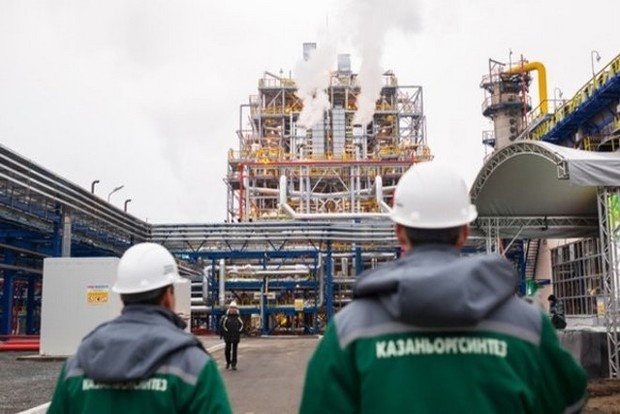 About 3,000 people were trained in their workplaces

Natalia Vakatova, chief of personnel training department at Kazanorgsintez PJSC, told the correspondent of Realnoe Vremya that the company itself has a license for educational activities. ''Programs have been developed for training the employees, there are instructors, teachers, who also undergo refresher courses as part of their pedagogical activities. Skilled workers of Kazanorgsintez also teach in the college named after V.P. Lushnikov, the plant has established close cooperation with them,'' Natalia Vakatova said. In 2018, 326 college students undergo practical training at the enterprise.

About 2,200 employees of Kazanorgsintez were trained in educational institutions of Kazan in 2017. Some of the employees improved professional standard in Moscow and St. Petersburg.

''Under the programme initiated by assistant to Tatarstan president Rinat Sabirov, some workers that have potential for learning are sent to obtain higher education at Kazan National Research Technological University. Now 26 people are studying under this programme, this year another 15 employees will increase the level of knowledge,'' Natalia Vakatova explains. After graduation, employees must return to the enterprise and work on it for three years.

The work with pensioners

Kazanorgsintez treats veterans with care and attention. There is a separate union of pensioners of production, which consists of 3,422 people: six of them — participants of the Great Patriotic War, 78 – homefront workers, 700 — disabled.

Fanur Almiev said that last year they held a festive concert to celebrate Victory Day. The invited veterans were presented with greeting cards and financial assistance. Traditionally, Kazanorgsintez makes a significant contribution to the ten-day festival of the disabled and Day of the Elderly. Non-working disabled persons registered in the primary trade union organization are provided with financial assistance. In total, in 2017 Kazanorgsintez provided assistance in the amount of more than 7 million rubles to non-working pensioners. The youth organization of Kazanorgsintez actively helps veterans. Workers call the seniors, ask how to help: this winter they removed snow in front of the houses, cleaned the roof in the spring, washed the windows.

Another form of assistance to pensioners is a non-state pension fund. ''Our pension fund consists of more than 2,000 employees, they receive non-state pension at the expense of the enterprise. To get it, the working experience should be 25 years,'' says the head of the social sphere at Kazanorgsintez PJSC. ''If he retired on preferential terms, the total length of service should be 20 years.''

Accordingly, women's working experience should reach 20 years of retirement on general basis and 15 years of retirement if the pension is granted on preferential terms. If people got I or II group disability, 3-5 years of work is enough for them to get a non-state pension. If the employee bears the title of honored worker, the allowance is 10%. Since 2017, the minimum monthly non-state pension has increased.

From Sabantuy to New Year tree

The employees of Kazanorgsintez support all city events. The national Tatar holiday, Sabantuy, in 2017 took place in the Birch grove in Kazan, where 11 people from the team of Kazanorgsintez took the 4-5 places in the weight categories 65 kg, 70 kg, 75 kg, 80 kg, 85 kg, 90 kg, 100 kg, 120 kg, over 120 kg, as well as the first place among veterans in the national wrestling competition Kurash. 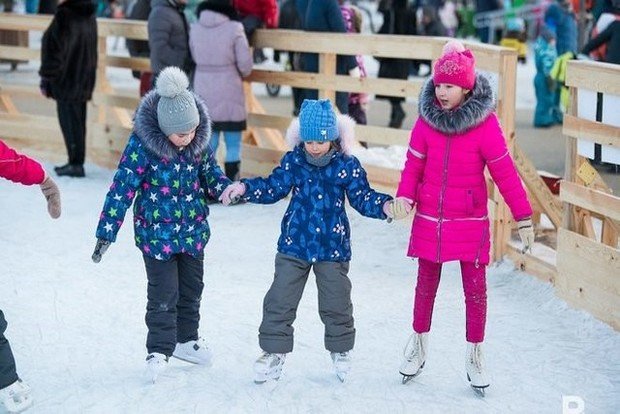 During the winter holidays and New Year holidays the place is visited by about 40,000 people

Traditionally, before the New Year, the park Pine Grove near the Palace of Culture of the Chemists is decorated by efforts of plant workers. On the square they install New Year tree, hang garlands, decorate the stage and fill the rink. Lighting design of the park takes children and adults in a fairy-tale town. During the winter holidays and New Year holidays the place is visited by about 40,000 people, including employees of Kazanorgsintez with families. ''In 2017, Kirovsky and Moskovsky districts won the first place in the nomination 'The Best design for New Year events'. Kazanorgsintez also contributed to this celebration,'' said Fanur Almiev.

Every autumn Kazanorgsintez participates in the promotion ''Help to get ready for school'': it buys schoolbags with stationery for 50 school students. Every year the company allocates funds for the needs of children's rehabilitation centre April. Water heaters were bought for Kazan school No. 61, where children with disabilities study.