Owners count losses and complaint about the Russian Guard’s selectivity

It won't be possible to buy a gun or cartridge in all Football WC host cities in Russia from 25 May. Analogous security measures were taken in Kazan during last year's Confederations Cup. Entrepreneurs treat the restrictions with understanding but have to suffer losses. Realnoe Vremya tells about the prohibition in detail.

''The licence expired a long time ago, we won't sell''

About two months left to the world football championship, and Kazan is taking safety measures. It won't be possible to purchase a gun and cartridges in the city soon. Knowing about the prohibition, some gun shops prepared beforehand – they didn't prolong their licence for this period:

''We don't have guns, the licence expired a long time ago, we don't prolong it. There is almost no air gun. We aren't going to close before the Football WC,'' was said the correspondent in Security shop.

The restrictions will be introduced from 25 May to 25 July, civilian and service pistols turnover and cartridges for them are also banned. It won't be possible to buy and sell the specific goods in all Football WC host regions. It's not the first experience for entrepreneurs. They faced similar conditions before the Confederations Cup from last year's 1 June to 12 July. ''We are extremely hostile towards this. In general, the safety measure isn't probably excessive if the country treated us like humans. Banks took out loans at interest and still do, while the country doesn't allow to work. It just brings us to its knees. The staff we'd been preparing for 10 years is going away – because everybody needs to feed families, while we aren't able to pay salary. Incomes during this time are almost zero. Guns are our main income source,'' manager at Guns House Trading Company CJSC Andrey Romanov complains.

According to him, last year, it was necessary to not only stop the sale for a while but completely remove the goods from the shelves. Not only guns and cartridges but also hunting knives and defence weapons: air guns, electroshock weapons and even pepper sprays were meant. Entrepreneurs consider many of these restrictions excessive.

''We have to obtain a licence to sell guns, as we sell firearms. And the Russian Guard doesn't control those who sell only air guns: like if they didn't come to get a licence, it means they don't have authority. It means we're forbidden to sell air guns, and nothing happens to those who are outside the legal framework. The shops that don't need to obtain a licence continue selling the goods we are asked to remove,'' Andrey Romanov complained about inspectors' selectivity.

The Russian Guard didn't manage to answer Realnoe Vremya's request for several days. Meanwhile, the federal service's page contains information that any activity of arm shops that sell civilian guns and cartridges for them stops. Accurate data aren't mentioned, but there is a link to the Russian president's decree, which has a period from 25 May to 25 July. In addition, any travel with a gun will be categorically prohibited, even hunting will be prohibited. According to him, last year, it was necessary to not only stop the sale for a while but completely remove the goods from the shelves. Not only guns and cartridges but also hunting knives and defence weapons were meant. Photo: Oleg Tikhonov

At the same time, very shops don't have a single idea of what can be and can't be sold during the restricted period. For instance, the manager of Guns House Trading Company CJSC says about the prohibition of the sale of any civilian guns whose energy is more than 3,5 J, 90% of air guns belong to these indicators. ''You're welcome to sell up to 3,5, but this segment isn't so interesting for purchasers,'' says Andrey Romanov.

Hunting House shop thinks the sale of air guns up to 7,5 J is permitted. But they said they could be mistaken. The full assortment is sold руку now, but they already know about the restrictions.

''The prohibition on sale will be only in late May. Now we still sell rifles, air guns, pistols. Last year, we worked on the same conditions we will have this year. Everything was removed and closed. The shop didn't stop its work, but what required a licence was removed from sale,'' says seller of Hunting House Marsel Asatov.

He added that last year people came and asked about the banned goods during the restricted period, we had to explain its absence. The trading point offers not only guns, there are goods for tourism, fishing, which also helped to get out of the situation,'' replied the seller. 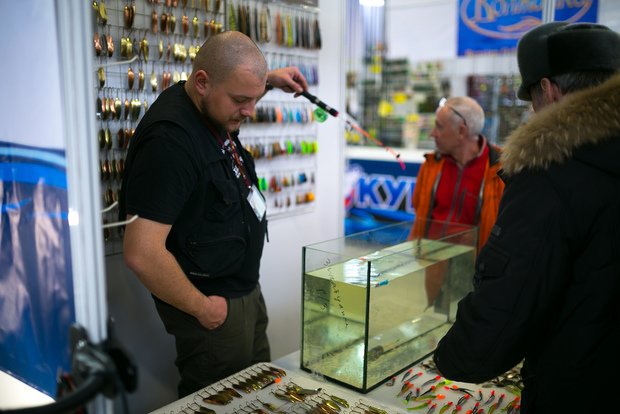 The trading point offers not only guns, there are goods for tourism, fishing, which also helped to get out of the situation,'' replied the seller. Photo: Roman Khasayev

Sports Arsenal shop assures they don't sell guns, they have only air guns right up to 3,5 J, which isn't banned before the Football WC.

Timur Gatin, director of Jump PLC, which offers including airsoft and air guns, also prepared for the prohibition.

''We don't have guns that would be prohibited, air guns don't refer to them. According to last year's experience, I can say the police come on a regular basis, they already check two-three weeks before the competition. They also came last year, asked to remove what we didn't need to remove, for instance, air guns,'' replied Timur Gatin.

The sale of this good is quite popular in online shops where all is calm now.

''Nobody has called and said anything. And we don't have goods that can be prohibited. Ours is called ''constructive goods similar to weapons''. We call an air gun for an easier understanding. But, in fact, it's not true,'' explained entrepreneur of Without Powder online shop Aleksey Rodchenko adding he wasn't sure the measures would affect safety during the WC much.