Nizhnekamskneftekhim to complete reconstruction of BTP in 2018

Nizhnekamsk's core enterprise has started to update biological treatment plants. Citizens will feel the result of the reconstruction in the short run – air will become clearer. Realnoe Vremya tells how much money the enterprise will expend on the update and how NKNKH solves the problem of reducing fresh river water consumption.

Second stage of reconstruction kicks off

After pre-treatment, chemically contaminated wastewater will go to pre-aerators – they will remove all gases from the dirty water, and the system will send them to biofilters. Strong smells will turn into water and carbon dioxide, as a result, there will be fewer unpleasant smells in the city. It will cost Nizhnekamskneftekhim 1bn rubles, and the project is planned to be fulfilled by the end of the year. Not only chemically contaminated wastewater from the whole industrial hub but also sewage from Nizhnekamsk go to the NKNKH biological treatment plants. Photo: NKNKH press service

In addition, the construction of a new collector, which is to be finished by 2020, will start this year. All industrial wastewater will go to the biological treatment plants through the new ''pipe''. Thanks to the new collector, the sewage transportation system's reliability will rise. The collector will be laid far from populated places, which will make residency of citizens from the nearest settlements more comfortable.

Not only chemically contaminated wastewater from the whole industrial hub but also sewage from Nizhnekamsk go to the NKNKH biological treatment plants. The BTPs were launched in 1966. But as time went by, their capacities weren't enough. This is why the plants were reconstructed in 1980. It was the only update of the plants. The equipment has become obsolete over the years of work. For this reason, the enterprise thought of reconstructing the BTPs several years ago.

The first stage began in 2015: the hub of sewage was updated during two years, which cost about 600m rubles. Thanks to the reconstruction, the quality of treated wastewater improved in 14 indicators.

Within the Year of Ecology 2017, Nizhnekamskneftekhim fulfilled a quadripartite agreement, which was signed with the Ministry of Natural Resources of Russia, Federal Service for Supervision of Natural Resource Usage and the government of Tatarstan. In 2016, 96 environmental protection measures were taken, the company spent 1,029,99 million rubles on it.

Last year, the treatment of buffer ponds in River Tunguche ended. Storm water from the industrial zone flows to the waterbody, and here it goes through natural treatment: there is a sludge at the bottom of the ponds, while the water is discharged to River Tunguche. As a result, the waterbody silts up. The buffer ponds have being used since 1973, and a ''pie'' of silt of many metres in length has formed at the bottom during this time. Due to this, the waterbodies couldn't cope with treatment any more. This is why NKNKH made a decision to clean the bottom several years ago. The silt was pumped out for three summer seasons (using Geotube container's highly-effective fabric filter system) and sent it to the sludge collector. 15,200 cubic metres of sludge was taken and dried in 2017. It's been 37,000 cubic metres of sludge since 2016. 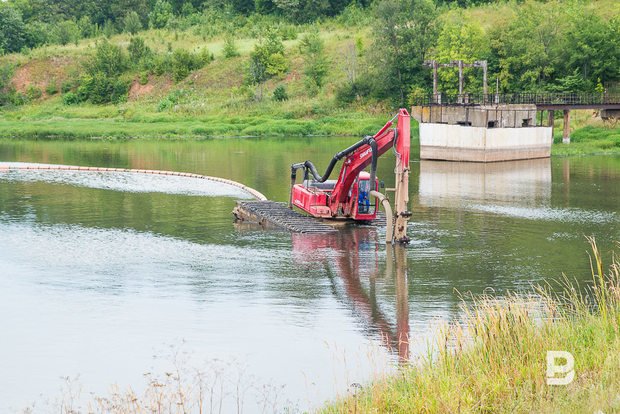 The silt was pumped out for three summer seasons with a floating excavator. Photo: Maksim Platonov

When we decided to clean the bottom, the distance from the bottom to water surfaces in different places was from 20 to 50 cm. After ending the clearance, specialists of the scientific and technological centre did research and concluded the level we reached after cleaning the pond will enable to prevent discharges,'' said deputy head engineer on environmental protection at Nizhnekamskneftekhim Andrey Rubezhov.

Now treated water is discharged into the river, but the enterprise wants to return this water to production, which will enable to reduce the volume of fresh water intake from River Kama. Such a scheme is already applied in the buffer pond in River Strelochny Log. And this has enabled to repeatedly use almost 8 million cubic metres of wash waters since August 2014.

Reduction of fresh river water consumption is one of the tasks that Nizhnekamskneftekhim sets on environmental protection. The enterprise started to fulfil ecological programmes in 2001. Emissions into the atmosphere have reduced by 54% during this time, though production of goods has doubled during this time.

From 2014 to 2017, Nizhnekamskneftekhim has taken 291 ecological measures by spending a totality of 3,6bn rubles. Reduction of fresh river water consumption is one of the tasks that Nizhnekamskneftekhim sets on environmental protection. Photo: Maksim Platonov

Nizhnekamskneftekhim PJSC has the next ecological programme from 2014 to 2020. Its fulfilment will give considerable results in saving natural resources and also enable to decrease emissions and discharges into the environment. About 7,2bn rubles are expected to be spent to fulfil it.